ASU, partners commit to be a fair trade-designated university

Arizona State University President Michael Crow sent an open letter on March 28 to the ASU community committing ASU to be the largest fair trade university in the U.S. The commitment is in partnership with Aramark and Follett.

Fair trade-certified products are produced with fair labor practices and environmental protections. ASU joins 47 other universities and 533 university retailers that pledge to provide fair trade food items like coffee, tea, chocolate and other products including textiles. 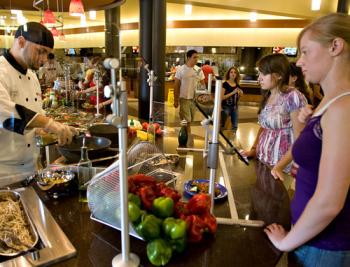 As part of the commitment, the following locations must provide at least two fair trade food options:

ASU School of Sustainability graduate student and Aramark intern Hannah Trigg invested three months in drafting the fair trade commitment and implementing most of its provisions, and then partnered with University Sustainability Practices for the final steps in securing the commitment. Biological sciences junior Daniella Simari continues to lead tabling events, education and outreach.

Four ASU students will attend a national conference and showcase fai trade innovations in late March. They also plan to host a lecture about fair trade clothing in partnership with The Fabric Studio and the ASU Global Institute of Sustainability on April 27.

Campaign organizer and Japanese senior Sydney Williamson connects the ASU community to parts of the world most affected by fair trade practices. The campaign asked students to write Valentine’s Day cards to farmers in Ecuador, Ghana and Philippines. In April, Asian Pacific Heritage month, the campaign will bring more awareness to tea grown in Asia and India.

“We’ve seen these events excite both international students and U.S.-born students,” she said. “It’s a powerful way to humanize the issue of fair trade.”

“The university’s food reconnection goal includes re-establishing a strong relationship with nutritional food and where it comes from,” said Mick Dalrymple, university sustainability practices director. “When we buy fair trade, we’re closer to knowing our food’s sources and impacts on other people and the health of our planet.”

Learn more about ASU’s food reconnection goal. Learn about how to become involved in collaborative sustainability action on campus.

Moving the needle on fashion education

Just months into its first academic track at Arizona State University, the newly established fashion degree program is already looking like a powerhouse for fashion education. Unfolding since last August in the School of Art in ASU’s Herberger Institute of Design and the Arts, the program offers a kaleidoscopic range of topics and experiences that has been drawing students from an array of disc...

Putting the squeeze on sustainability

Community garden to spring up on campus 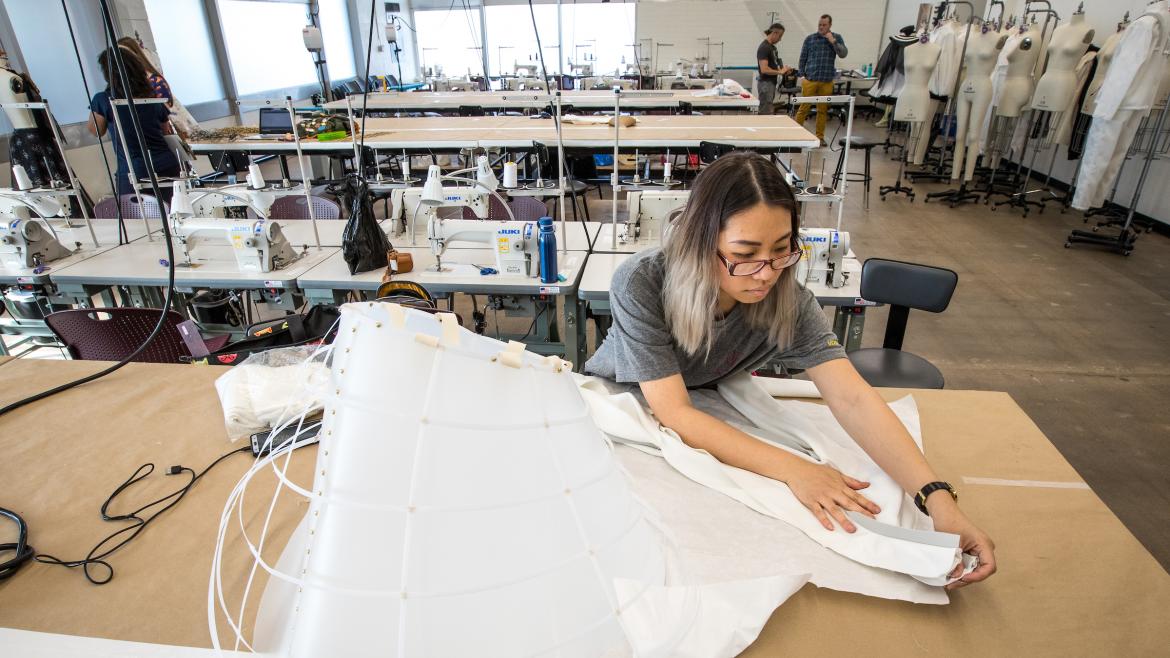 Moving the needle on fashion education

ASU fashion program on the fast track for industry innovation

Just months into its first academic track at Arizona State University, the newly established fashion degree program is already looking like a powerhouse for fashion education.

Unfolding since last August in the School of Art in ASU’s Herberger Institute of Design and the Arts, the program offers a kaleidoscopic range of topics and experiences that has been drawing students from an array of disciplines to the newly renovated Fashion Studio on ASU’s Tempe campus. 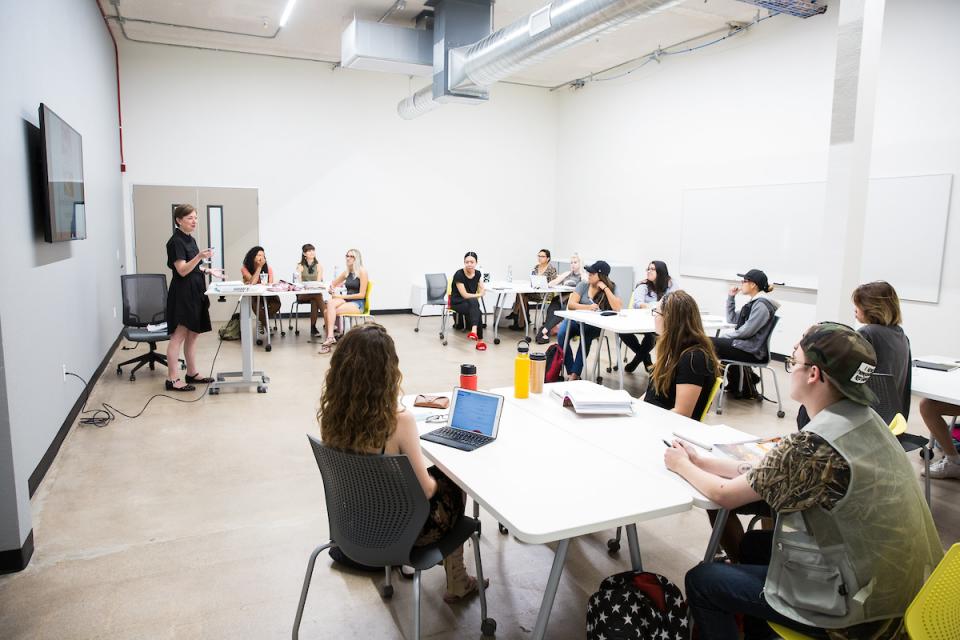 “We are trying to put together a program that is responding to a changing fashion industry right now,” said Dennita Sewell, professor of practice and fashion director at a benefactor event for the Arizona Costume Institute (ACI) on March 26.

“We are striving to see that whatever happens in this space will lead to students getting jobs with this equipment and this program. You can manufacture Donna Karan’s line in this studio with this equipment,” Sewell told attendees gathered at the Fashion Studio for the ACI event.

She thanked Herberger Institute Dean Steven Tepper and School of Art Director Joanna Grabski for their support in designing the fashion program’s first year at ASU. Tepper and Grabski also heaped praise on Sewell for her vision and thought leadership.

The event also included a Q&A talkback between Sewell and designer-to-the-stars Zang Toi, who was a special guest for the ACI event. The New York-based dressmaker — who counts Sharon Stone, Melinda Gates and Patti LaBelle among his famous clients — also shared his enthusiasm for ASU’s new fashion program and the innovative work he saw from some of the students designing in the program's Fashion Technology class.

“I think there is room for everything in fashion,” Toi told ASU Now of the unique student creations in wearable tech. “I think functional fashion will be great for people who really need it and it will be great for those who have the mindset to create it — really brilliant.”

A mixed-media class where dresses and drones sometimes meet, ASU’s Fashion Technology will be on full display April 4 at the Phoenix Convention Center in downtown Phoenix when designer and class instructor Galina Mihaleva and her students will exhibit their creations in the Wearables in Smart Fabrics fashion show. The show comes in the midst of the Materials Research Society Meeting and Exhibit, an annual conference that brings together scientists and industrial designers from around the world. It will run from April 2–6 at the Phoenix Convention Center.

“I’m very excited for the students to be able to participate in this show because it’s a labor of love,” Mihaleva said. “After putting so much time and effort into making this class so incredible, they deserve to have this platform to showcase their work, especially at a world-renowned conference such as this.”

What to look for in wearable tech

Since the beginning of the spring 2018 semester, Mihaleva and her students have been working on designs inspired by nature and the environment — areas she says are in need of attention as we trend toward healthier and sustainable lifestyles.

Beyond smart glasses, watches and what we have come to know of wearable tech, Mihaleva says “smart clothing” can inform us, heal us and even protect us from things that are not immediately apparent in our environment.

Fashion Technology student Ben Viton has been working on an LED-enhanced tracksuit that will scroll text down the suit’s sleeves once activated through computer coding. Joking about the branding opportunities that his LED text suit could attract, Viton also told attendees at the ACI-ASU Fashion Studio event that the outfit was actually inspired by HIV awareness and the idea that the suit could be used to share results of health tests in the spirit of transparency.

Carol Wong and Cindy Tran are co-creating a smart dress design to protect wearers from external pollution. The outfit includes a coding-activated oxygen mask that is designed to pop-up for suggested use when oxygen levels decline to an unhealthy state. Wong, a fashion design major who is also organizing a separate student-run fashion showFashion design major Carol Wong is leading the student-run fashion show "Uncertainty," which will be held from 6-9 p.m. March 31 at the Student Pavilion on ASU's Tempe campus. for her capstone project, is handling the dress design for her wearable tech project. Tran, an industrial design senior, is handling the coding. 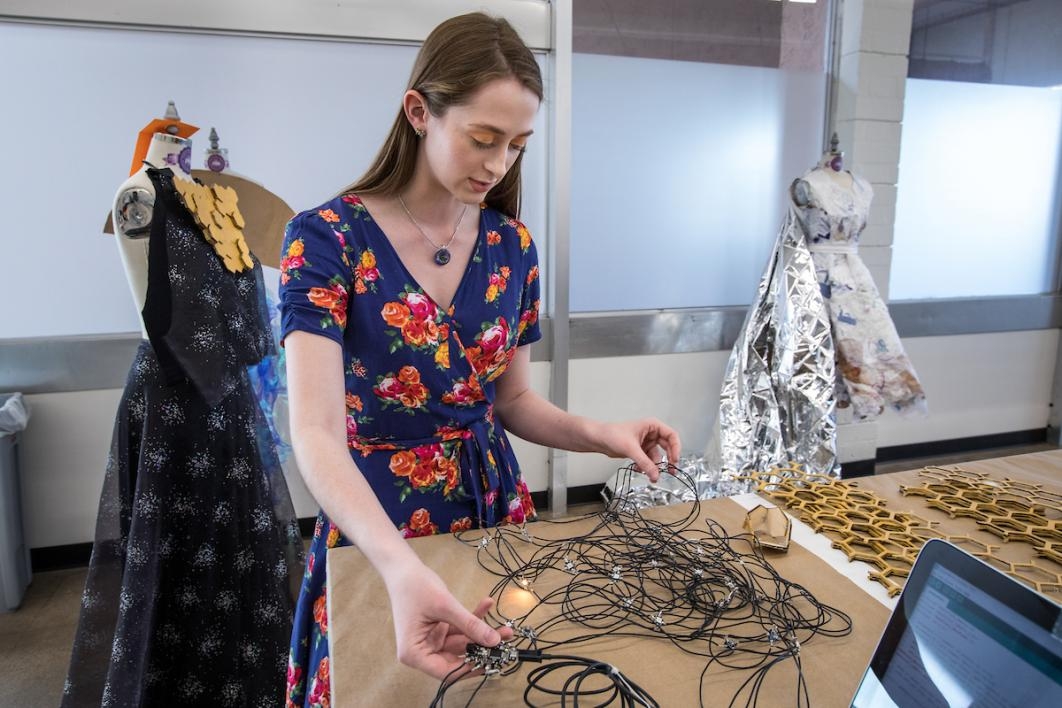 Jenna Forrey, a human systems engineering sophomore, works on the circuitry for LED lights that will be incorporated into her bee-inspired dress that will be shown as part of the 2018 MRS Wearables in Smart Fabrics fashion show on April 4. 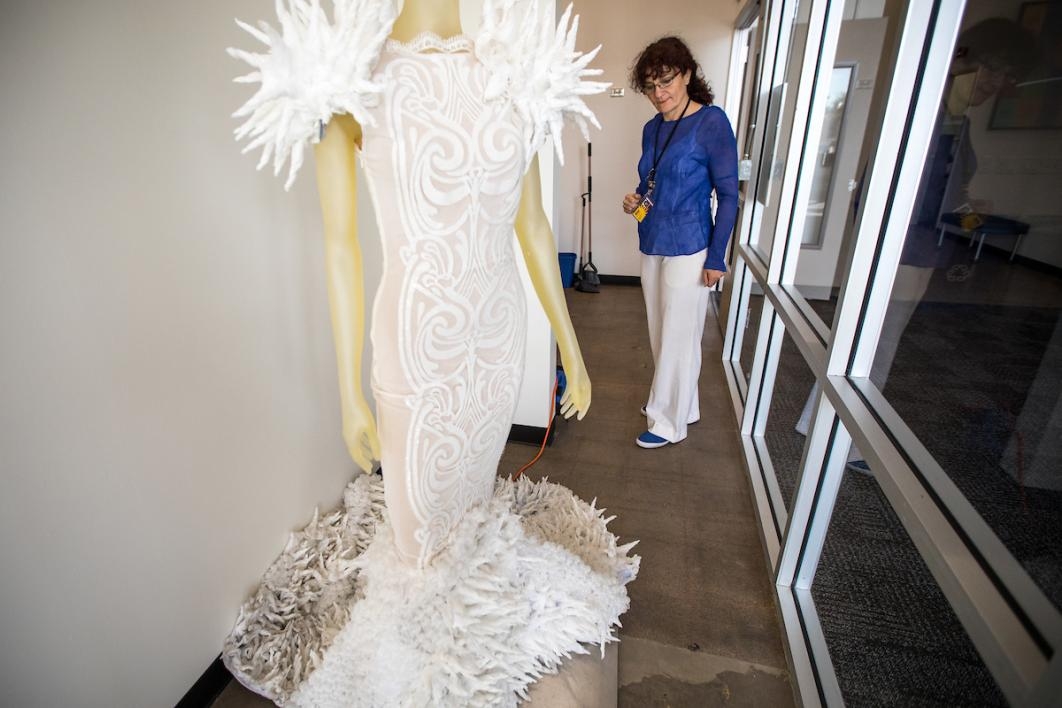 Fashion Technology instructor Galina Mihaleva demonstrates one of her wearable tech dress designs at the ASU Fashion Studio in Tempe. 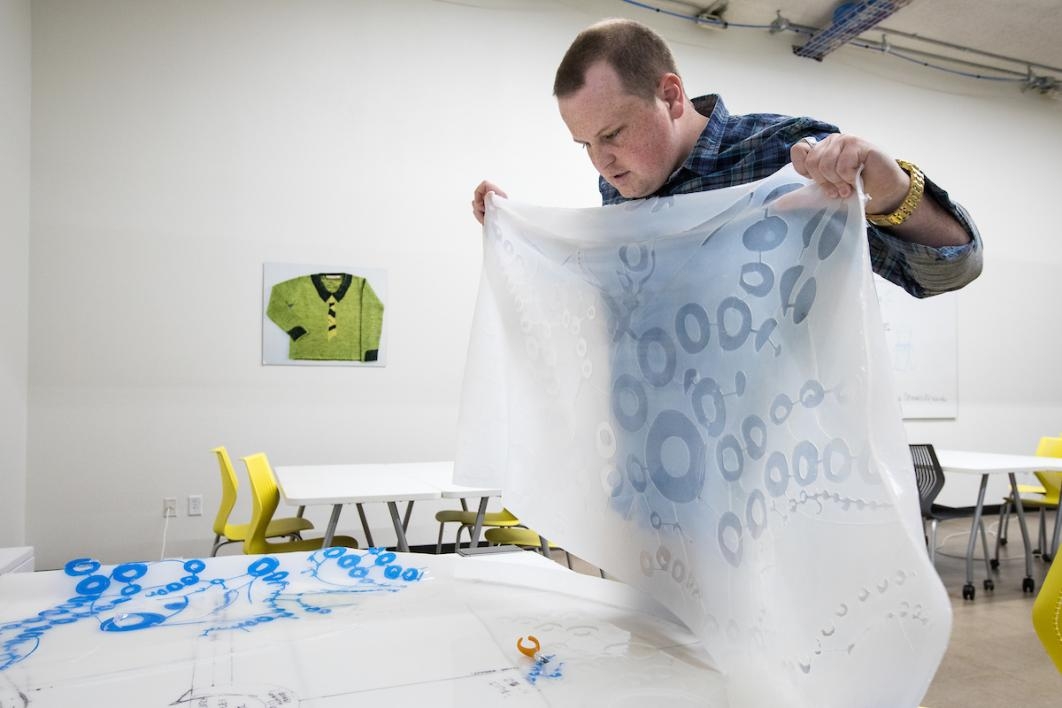 Fashion design junior Patrick St. Clair holds a piece of a silicon skirt which, when finished, will have a blue liquid flowing through it. The project will be shown as part of the 2018 MRS Wearables in Smart Fabrics fashion show on April 4. 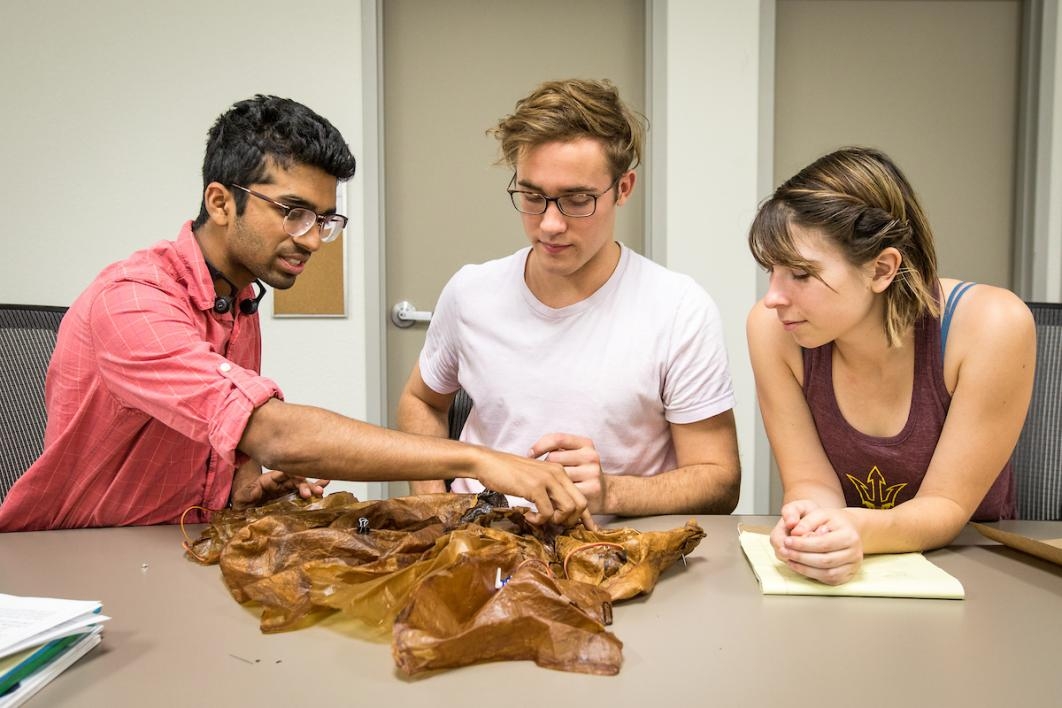 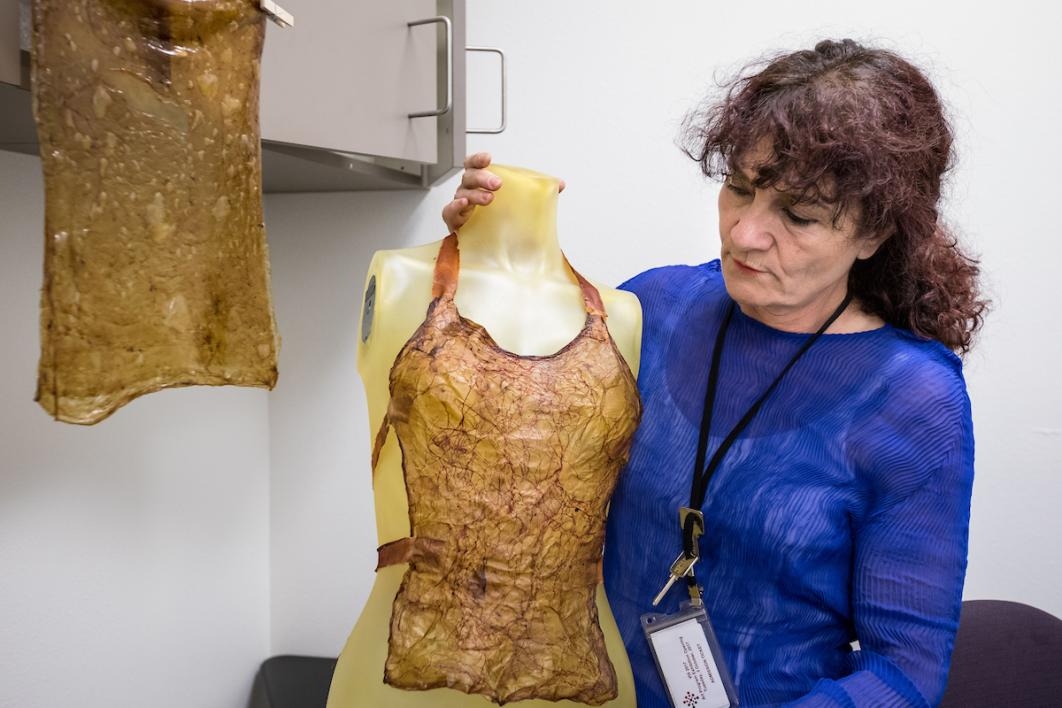 Fashion Technology instructor Galina Mihaleva displays a bodice made of living kombucha bacterium culture at the ASU Fashion Studio on the Tempe campus.

“We wanted to offer a practical futuristic fashion design for people in cities with high pollution rates,” said Wong, who has experienced her share of health challenges due to questionable air quality. “Incorporating technology into the traditional design process was an overwhelming experience at first but we all got very excited by the possibilities after we started putting products together and seeing it all come together.”

Jenna Forrey, a human systems engineering major, is also excited about getting a platform to show her first experiment in fashion design and wearable tech. Forrey’s dress, a motion-sensing LED-enhanced design, highlights her affinity for bees and flashes when the wearer moves to symbolize buzzing bees.

“With the bee population on the decline, I think it’s important to draw awareness to their importance in nature,” said Forrey, who has spent much of the semester traveling back and forth between the Fashion Studio in Tempe and ASU’s Polytechnic campus in Mesa, where most of her engineering labs are held.

Forrey says she has gained a new level of respect for the fashion industry since enrolling in Fashion Technology, pointing to the effort and long hours that go into transforming fabric and textiles into wearable designs.

For her part, Mihaleva — who has shown her wearable technology designs at international competitions — is designing a bodice created from kombuchaKombucha is a fermented colony of yeast and bacteria commonly touted for its health benefits.. She is lab-growing textiles created from the bacteria-yeast combination to demonstrate kombucha’s value in sustainable living and design. Mihaleva also enlisted a group of students from ASU’s Luminosity LabThe Luminosity Lab is a selective group of interdisciplinary students within ASU who are drawing from their network of knowledge to develop and deploy ideas, technologies, and products that aim to provide unconventional and effective solutions to the world’s most complex challenges. to help automate and animate her bodice to mimic the human organ’s interactions with microbiomes.

“I think this class is very important in bringing awareness to things that make life better and more transparent," Mihaleva said. "This is fashion for the future but we need to explore more ideas. It’s not enough today to just be a traditional fashion designer. Some of us will also become fashion fusionists through emerging science and technology.”

If you want to go

Top photo: Fashion design senior Carol Wong works on her "smart dress" design that will respond to air quality and pollution with LED lights and computer coding. The project will be shown as part of the 2018 MRS Wearables in Smart Fabrics fashion show on April 4. Photo by Charlie Leight/ASU Now