Humanities studies and baseball? It’s not exactly an obvious pairing.

“When I tell people English students are working for the [San Diego] Padres, they look at me all confused,” said Ruby Macksoud, director of internships for Arizona State University’s Department of English.

But it turns out those students have a lot to offer minor-league ballplayers, many of whom come to the U.S. from places like the Dominican Republic, Venezuela, Puerto Rico, Cuba, Colombia and Mexico, where Spanish is the predominant language and cultural norms can be quite different. 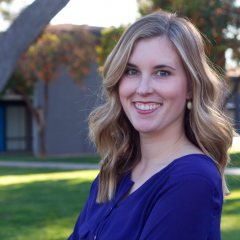 “It really challenged me in the sense that almost nothing about the environment, as far as teaching is concerned, is traditional,” Teske said. “We don’t use a textbook, there are no computers, I teach in a conference room where there are no desks, just a big table and a white board.”

Many of the players are still teenagers, and by the time they step into Foltz’s and Teske’s classes in the afternoon, they’ve already been out playing ball in the sun for hours — which, after all, Teske pointed out, is what they’re here to do in the first place.

It was clear that trying to teach them through classical methods, by standing at a board and mapping out sentence structure and verb conjugations, wasn’t the best plan of action.

“You can read all you want about pedagogy and teaching theory, but when you step into that kind of context, a lot of it doesn’t apply,” Teske said. “I had to think, who are my students, what do they need and how do I serve them?” 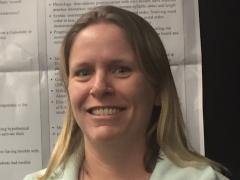 Turns out what they needed was practical language and cultural lessons for day-to-day tasks like ordering at a restaurant and withdrawing money from a bank, and Teske and Foltz were able to serve them by revamping their classes to be more task-based.

One day players would order their favorite meal at Chipotle, and on another Teske would walk them through a banking app on their smartphones. Foltz even found a way to introduce some friendly competition into the classes, doing pushups with the players on a day they learned gym and anatomy vocabulary.

“I liked having that interaction with the players,” Foltz said. “It’s very important to be able to adapt, and it was kind of nice to be outside of the traditional classroom setting.”

Teske enjoyed the experience so much, she’ll be working with the Padres again this year. She’ll have more of a leadership role this time around and has made it her goal to establish more structure and consistency in the curriculum, which will be helpful if players have to miss a day or travel to a different training facility where someone else will be teaching the classes.

“I hope to keep doing this year after year,” she said. “At this point, it’s offering me everything I want in a job. I get to be teacher and make connections with students, but I also have administrative duties. At a university, you probably have to work 10 to 15 years to do that kind of stuff. So I’m getting in on it early in the game.”

Macksoud is happy to see humanities students branching out from academia.

“Humanities are very much needed, in pockets and corners of the world that people don’t often think about,” she said. “We want our students to reimagine what they can do with the skills they’ve learned and how that can be part of a larger community experience.”

@SunDevilHoops ended the year with a tough defeat in Dayton on Wednesday, 60-56. ... @SunDevilHoops ended the year with a tough defeat in Dayton on Wednesday, 60-56.