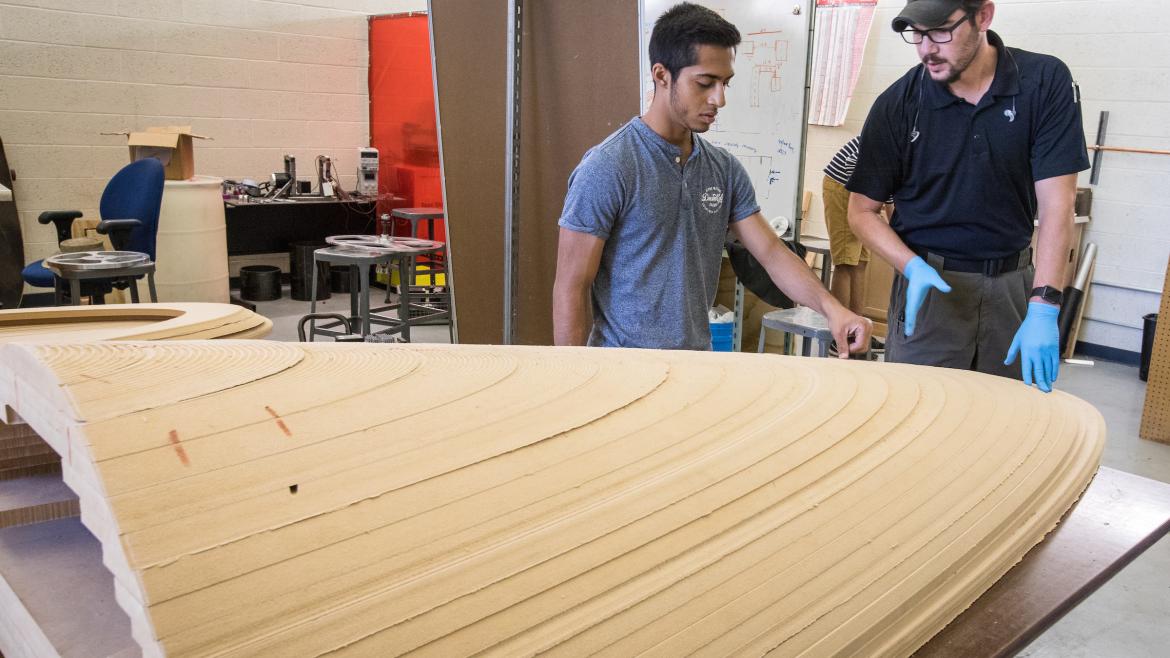 Things are shaping up for AZLoop team

The lazy days of summer are anything but for the AZLoop team.

With the Aug. 27 SpaceX competition fast approaching, the team has been busy building propulsion and braking systems, as well as the form needed to mold the pod that will run during the August event.

The goal: creating a working prototype of a new form of proposed mass transit called “Hyperloop” that promises to hit speeds of up to 750 mph.

The team — led by Arizona State University but made up of students from throughout Arizona in a range of majors — is on track to complete the project on time. A 50-foot test track has been built at the ASU Polytechnic campus; they’ll begin testing magnetic propulsion and braking systems the first week of July. Construction of a 150-foot track will begin in early July, with a completion date of around Aug. 1.

According to Josh Kosar, co-lead on the project and a new ASU graduate, they started out with a well-defined organizational structure but over time have had to make lots of changes to adapt to individual work styles and skill sets. New leaders emerged, adjustments were made and now the process is working out well.

“The most important thing I have learned so far as manufacturing lead is to manage a team,” said ASU mechanical engineering junior Himanshu Dave. “… Knowing their strengths and weaknesses as well as your own and understanding that has been one of the best skills I have learned.”

A precision-cut scale model of the pod is being produced in layers that will be attached to each other to shape the final pod design. The team will cover it with Bondo to fill in around the rough edges of the wood layers before it is sanded and primed.

“It’s all experimentation, lifting up the shape of it, changing it a little bit,” Dave said.

Magnetic braking systems are in the works, as well as propulsion systems. They will be attached to a sled filling in as the pod to test forward motion and braking systems on the 50-foot track. 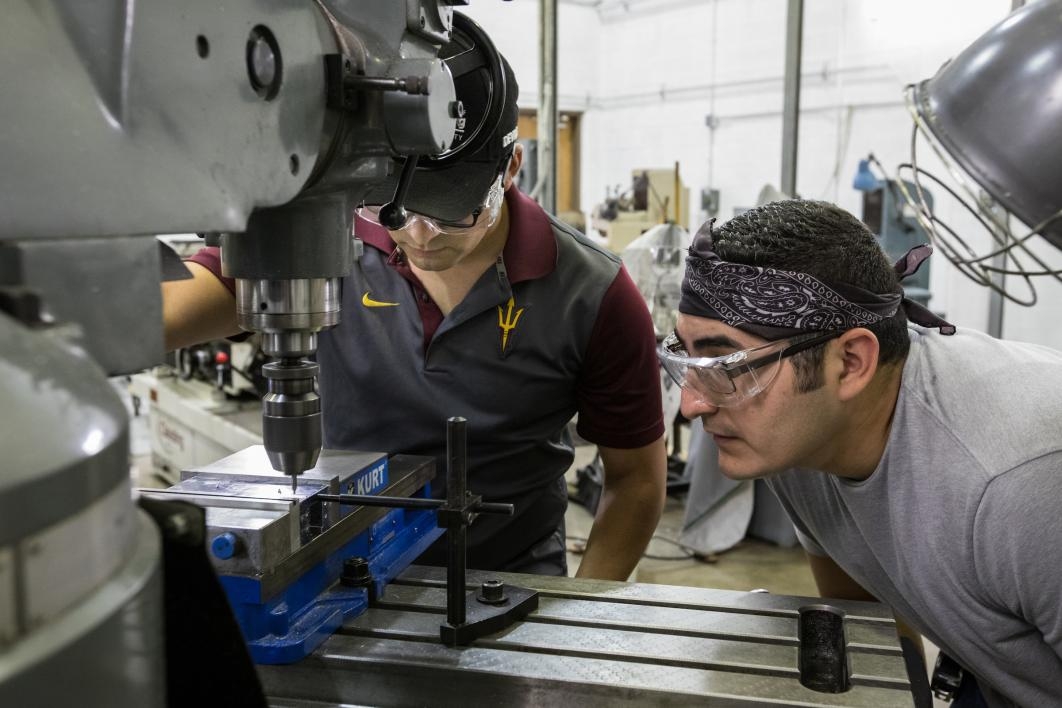 Breaking team member Marcos Valenzuela watches Shawn Ralson drill a hole in one of the magnetic braking arrays June 29. The team is nearly finished machining the braking modules that they'll soon test on the prototype and test track. After the modules pass the tests, they'll be attached to the base of the vehicle the AZLoop team will take to the August SpaceX Hyperloop competition. 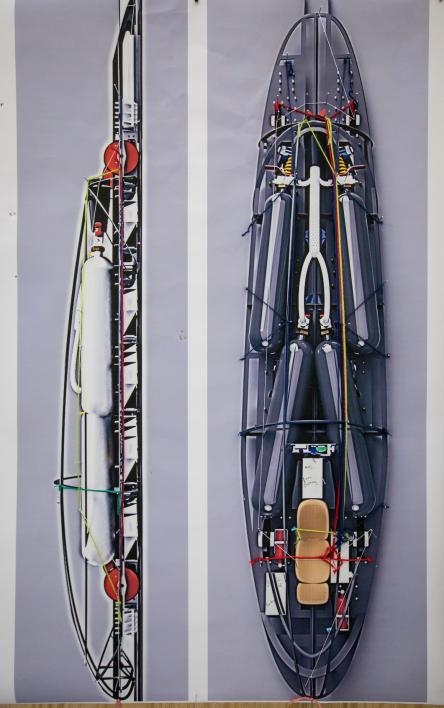 A schematic shows what the interior of the pod would look like. 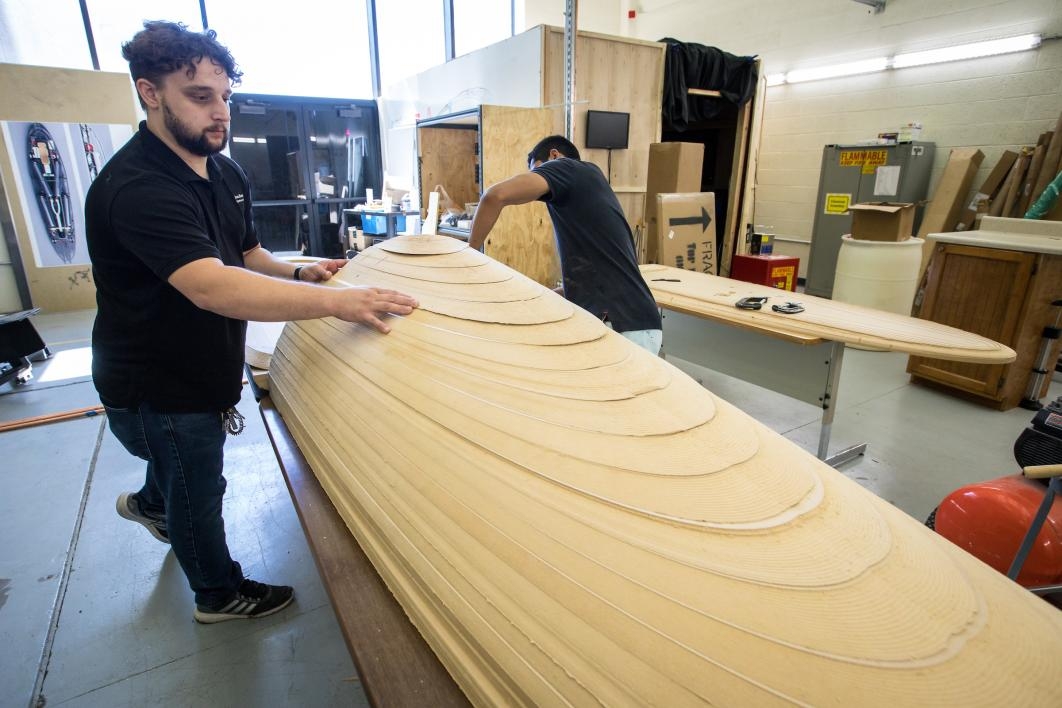 Project co-lead Josh Kosar (left) and manufacturing team lead Himanshu Dave stack recently cut layers of compressed wood to form the full-size pod in their studio on the Polytechnic campu June 27. The team will cover the forms with Bondo, primer and a release agent before wrapping it in the carbon fiber shell that will be the exterior of the vehicle the team will take to competition. 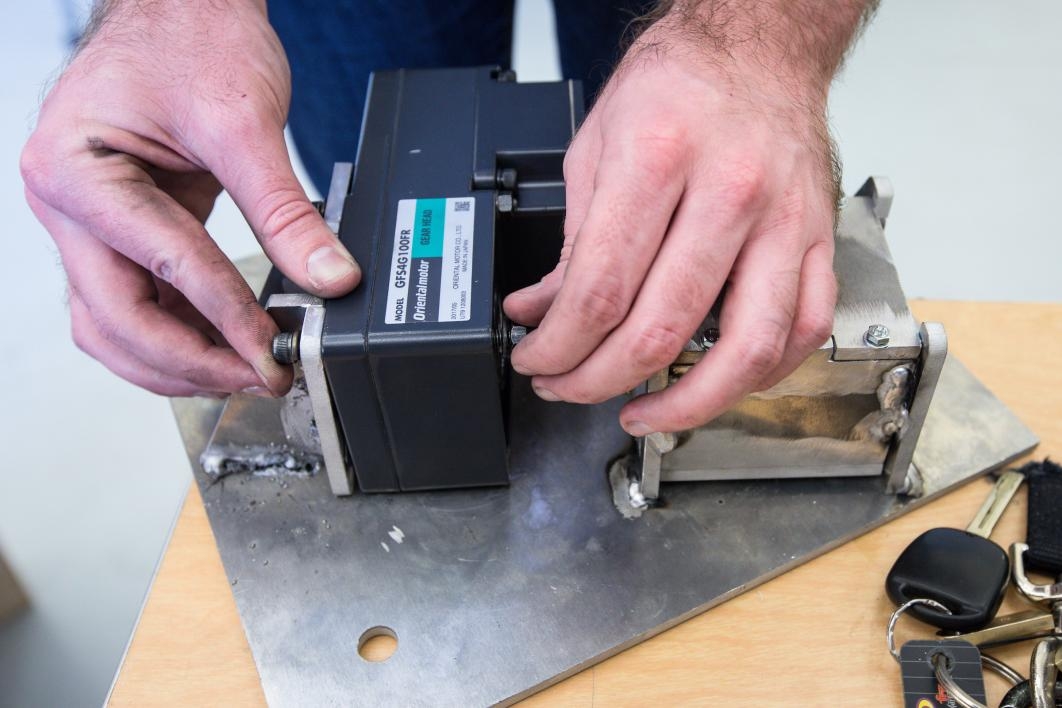 Braking systems lead Jimmy Casey attaches the motor assembly on a brake module on June 20. The team will soon test the brakes on the prototype and test track. After the modules pass the tests, they'll be attached to the base of the vehicle the team will take to California. 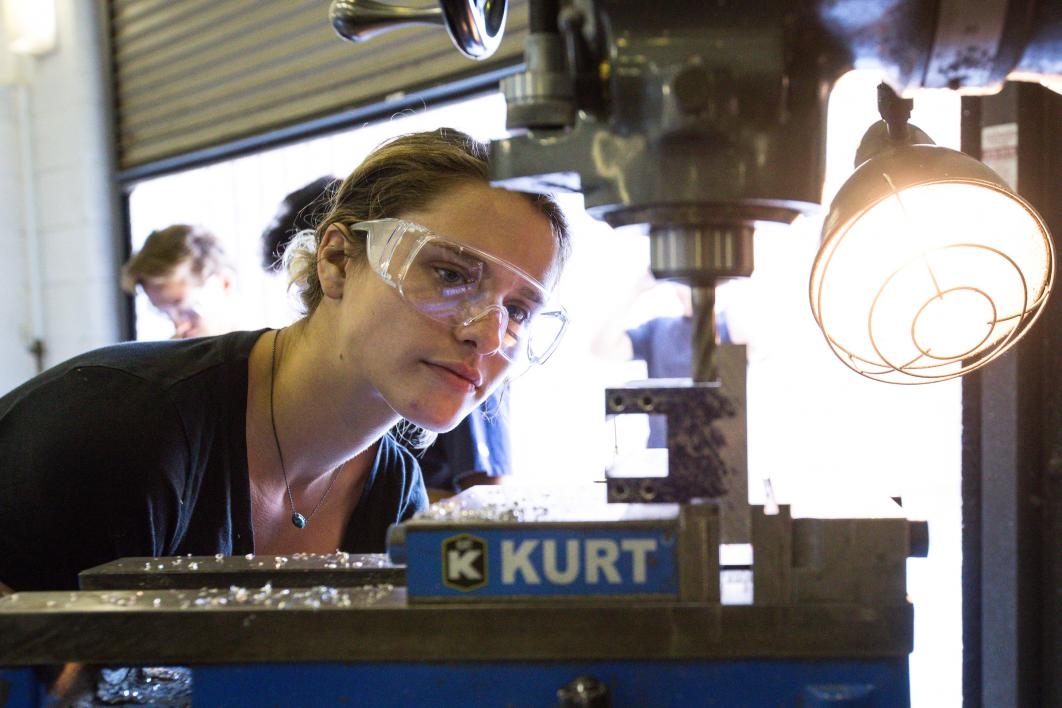 Levitation team lead Megan Moore, a physics senior, watches the milling of one of the levitation housing array modules on June 20. Mechanical team member Himanshu Dave on June 20 watches a computerized ShopBot cut sheets of compressed wood into layers that will become the shape of the 14-foot-long competition pod. The group cut more than 25 layers that week that they would then sand and treat so they can cover it with carbon fiber to make the high-speed vehicle shell that they’ll take to the August SpaceX competition. 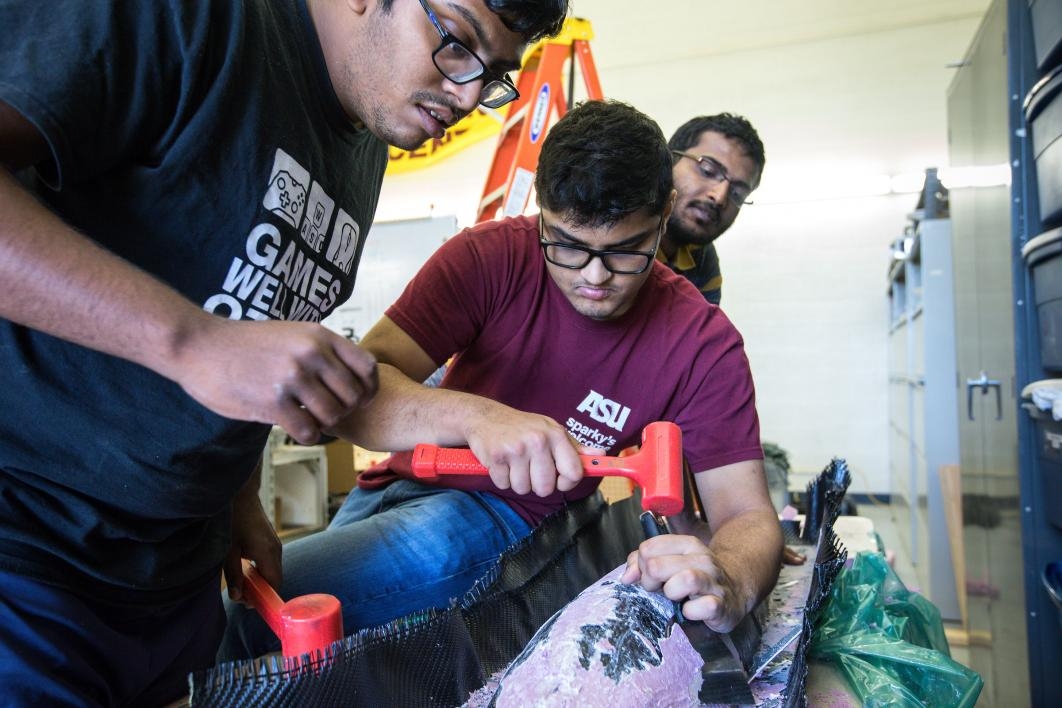 Gokul Chandasekaran (left) and Gautham Ayyapessur (right) watch as Prerak Dongaonkar carefully chips away the foam form from the carbon fiber prototype shell in the AZLoop team workshop on June 13. After the team tested the quarter-scale prototype of the pod, it turned its attention to the 14-foot-long version that will go to the SpaceX competition. 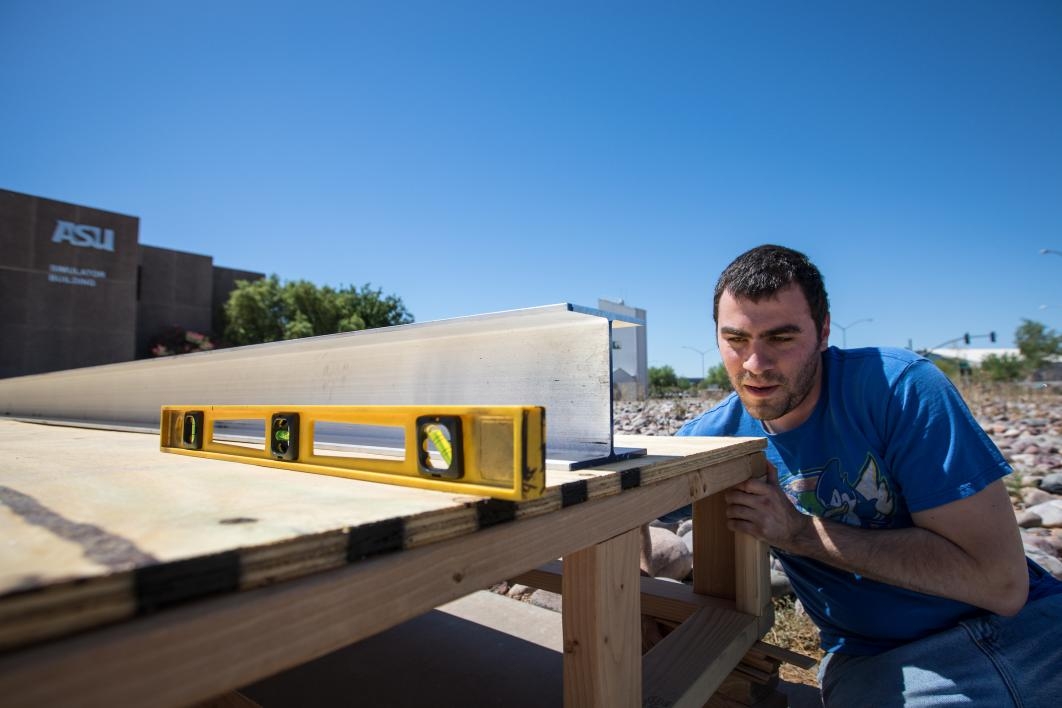 Mechanical engineering senior and mechanical team lead Anthony Spadafore adds another shim to level the 50-foot outdoor test track outside the AZLoop team workshop on the Polytechnic campus on June 13. Construction of a 150-foot track will begin in early July, with a completion date of around Aug. 1. On June 13, Anthony Spadafore and project co-lead Lynne Nethken look over the nearly completed 50-foot outdoor test track on the Polytechnic campus. Although the team is made up of students from multiple schools, including Embry-Riddle Aeronautical University and Northern Arizona University, it is led by ASU students and ASU dedicated lab space and funding to purchase prototype materials. 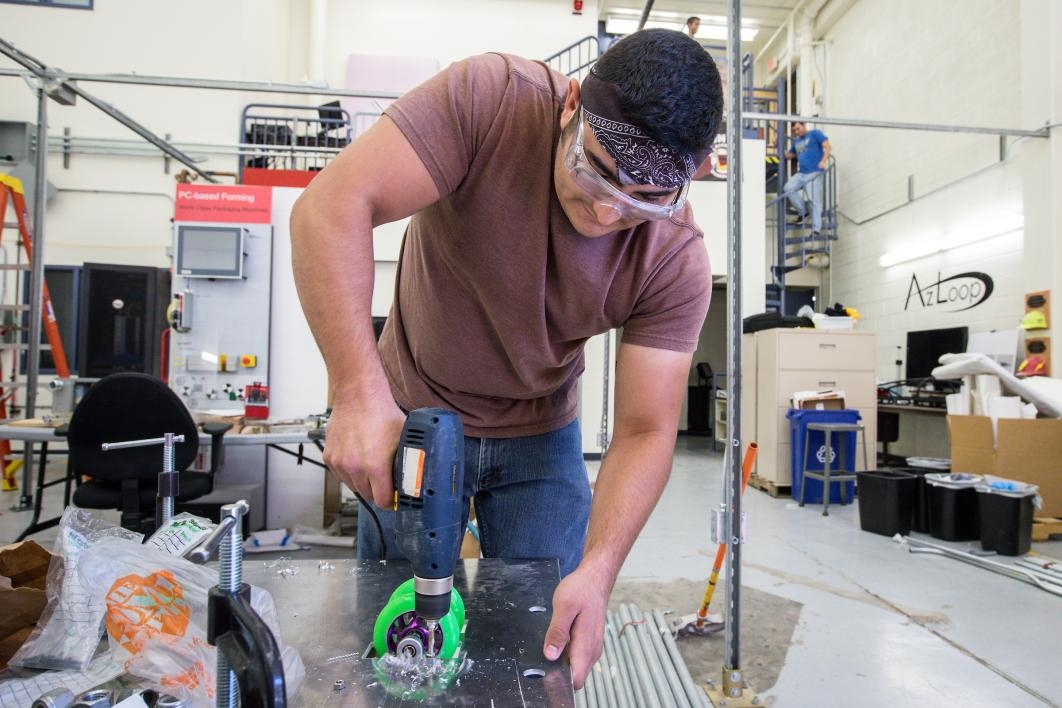 Mechanical engineering systems senior Marcos Valenzuela attaches polymer wheels to the base plate at the AZLoop team workshop on June 13. 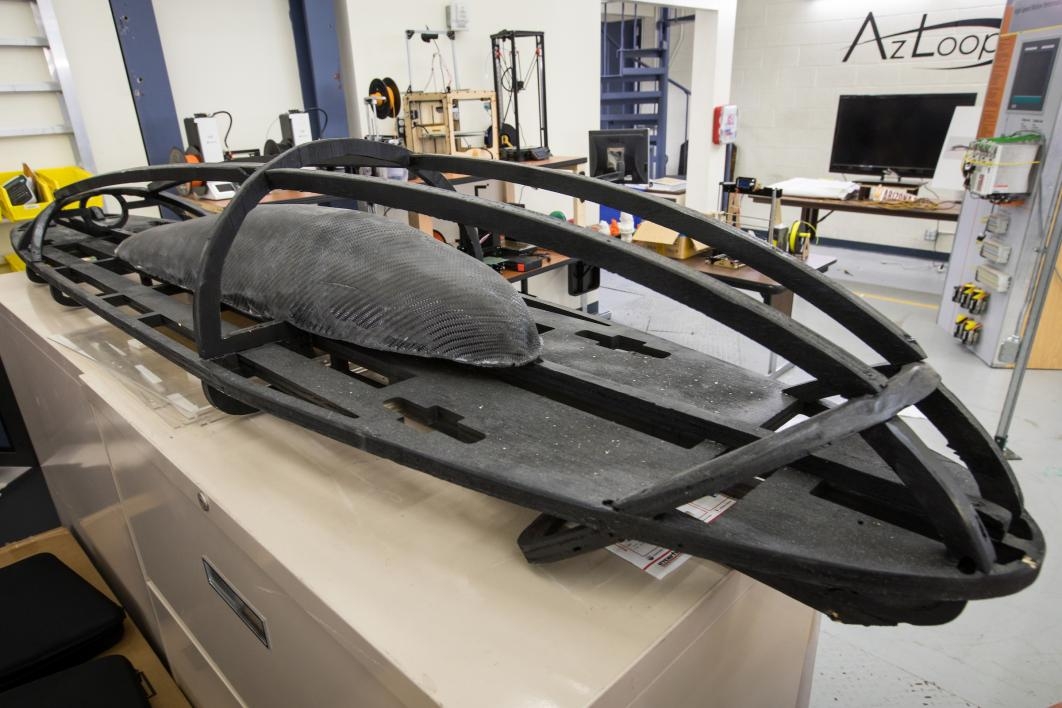 Two generations of Hyperloop mock-ups sit on a cabinet in the AZLoop studio in the Simulator Building on the Polytechnic campus. Stability team members Ayan Rafique (left) and Rohit Kumar Ladda on June 9 contemplate fixing a flywheel that was not cut accurately. Rafique is a senior in physics and electrical engineering. Ladda is a second-year grad student in mechanical engineering. They decided instead of ordering more aluminum and making a new one, they would have the manufacturing trainer, Rhett Sweeny, re-cut it.

Top photo: ASU mechanical engineering junior Himanshu Dave (left) gets some guidance from Chandler Gilbert Community College student Ernest Poteat on how to treat the layered model for the vehicle's carbon fiber shell on ASU's Polytechnic campus on Thursday, June 29. The mechanical team will cover the model with Bondo Body Filler, sand it smooth, paint on primer then a release agent and follow that with the carbon fiber strips. When completed in about six weeks, it will be attached to the vehicle the AZLoop team will take to the August SpaceX Hyperloop Pod Competition in California. Photo by Charlie Leight/ASU Now

AZLoop at ASU: How about mass transit at 750 mph?

A large group of students at Arizona State University has been spending every Friday night trying to figure out how to get to from Phoenix to San Diego — in about half an hour. Through a SpaceX competition, they’re working on a new form of proposed mass transit called “Hyperloop” that promises to hit speeds of up to 750 mph.“Picture a plane without wings, called a pod, that resides in a... 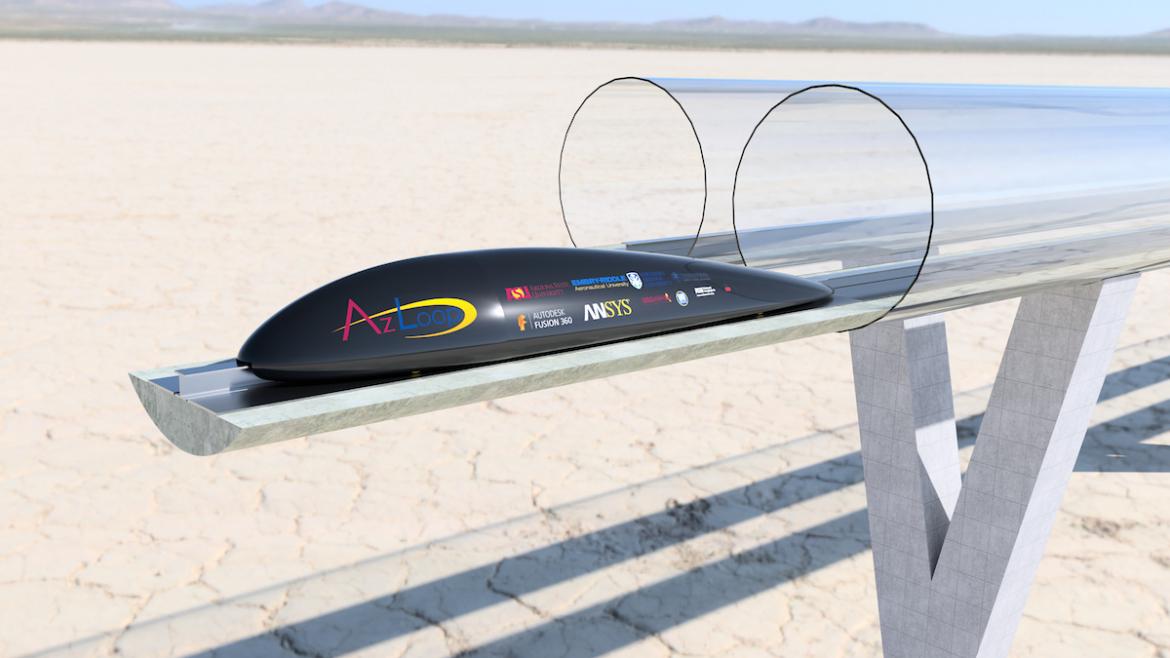 AZLoop at ASU: How about mass transit at 750 mph?

Competing in SpaceX Hyperloop competition, squad of more than 100 students from range of majors gets ready to submit plans

A large group of students at Arizona State University has been spending every Friday night trying to figure out how to get to from Phoenix to San Diego — in about half an hour.

Through a SpaceX competition, they’re working on a new form of proposed mass transit called “Hyperloop” that promises to hit speeds of up to 750 mph.

“Picture a plane without wings, called a pod, that resides in a steel tube,” said AZLoop team captain and project lead Lynne Nethken. “The idea is to bring down the pressure in the tube, near vacuum, significantly eliminating the atmospheric drag, allowing it to go much faster.”

The AZLoop team — more than 100 students from ASU (including Thunderbird School of Global Management), Embry-Riddle Aeronautical University and Northern Arizona University — meets at ASU’s Polytechnic campus in Mesa in the hopes of creating a high-speed corridor across the Southwest. The students come from a range of majors that include mechanical engineering, robotics, physics, astrobiology, marketing and business management.

ASU has encouraged the effort by providing dedicated lab space and funding to purchase materials for prototyping. AZLoop has received grants through the Poly Undergraduate Student Government’s Student Fee Allocation Board, and the Print and Imaging Lab worked up a gratis banner and business cards.

As part of the competition, the team recently submitted a design package for faculty review. Next, the students will get ready to present their plans before SpaceX engineers this spring.

With SpaceX approval, “we’ll have the OK to go to the build phase,” said project co-lead Josh Kosar, an undergraduate student in the Ira A. Fulton Schools of Engineering, studying robotics.

If it gets to that point, Nethken and Kosar said their team would construct a Hyperloop test track on the Poly campus.

AZLoop started last year as a project involving about a dozen students who survived a competition round that narrowed the field from about 1,300 teams to about 120. 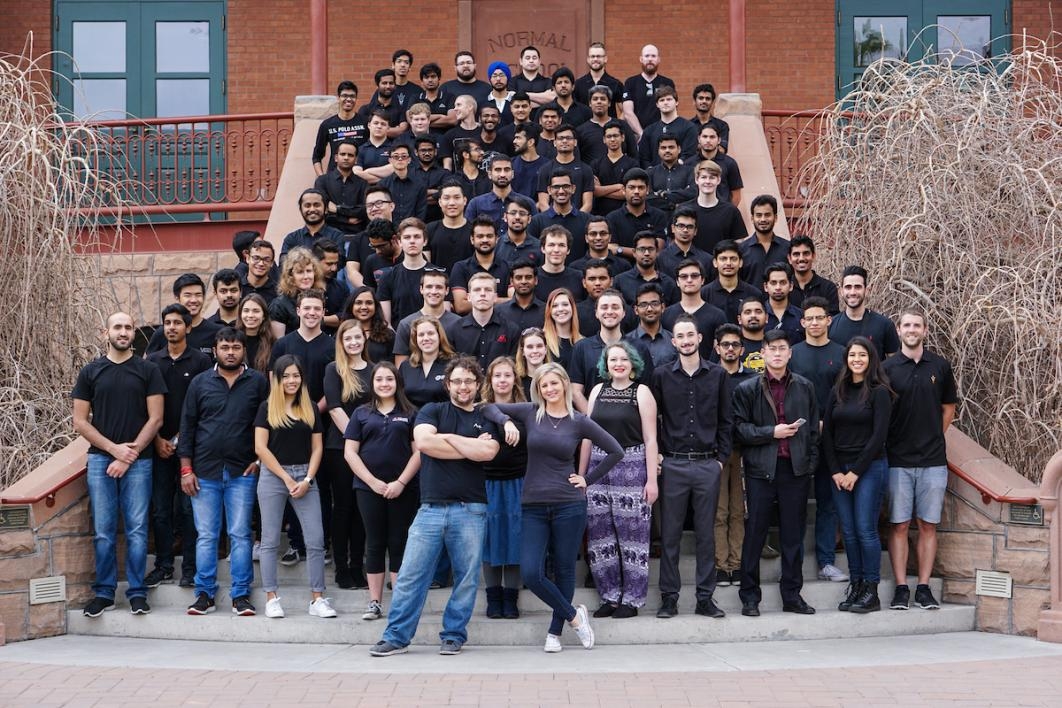 The AZLoop project at ASU involves dozens of students. Engineering senior Xunguang Li looks over the benchmarking specs for his controls team at the start of a recent Friday evening session. 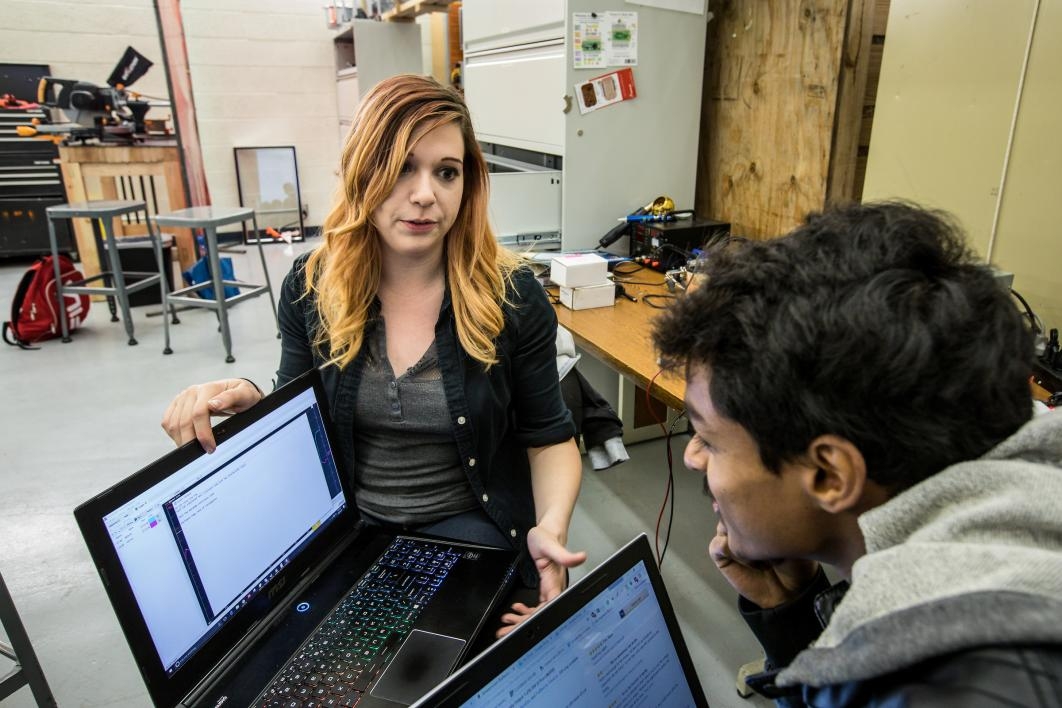 Systems engineering doctoral student Samantha Janko goes over information for the power team with grad student Prashanth Mansani. The AZLoop team is getting ready to submit its latest plans to SpaceX.

Nethken and Kosar don’t know their competitors because SpaceX hasn’t released that information. Still, they like their chances.

Below: Watch a video of one key component of the Hyperloop system.