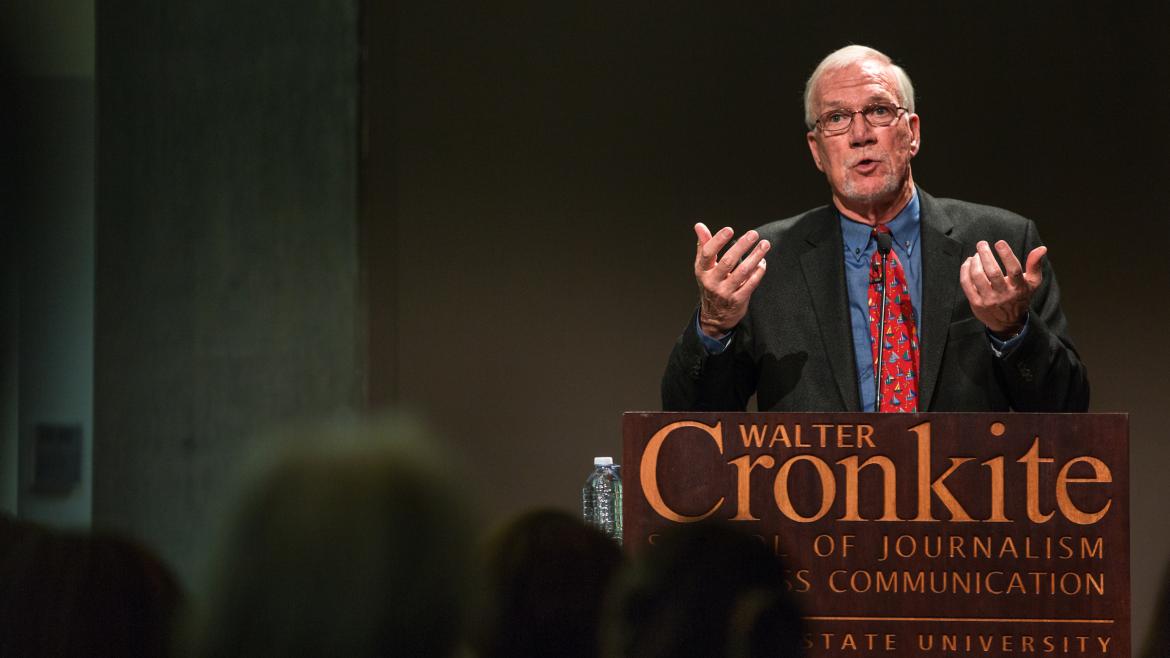 Boston Globe editor Walter V. Robinson says the president has awakened the watchdogs who 'are now barking so loudly'

Even as President Donald Trump insults and criticizes the media, his administration has been a tonic for investigative journalism, according to the Boston Globe editor who helped to uncover widespread sex abuse by Catholic priests.

“The very person who wants to cast out the watchdogs has awakened them,” said Walter V. Robinson. “And the watchdogs are now barking so loudly that much of the public is astir as well.”

Robinson led the Globe’s Spotlight team, which won the 2003 Pulitzer Prize for Public Service for its work uncovering hundreds of cases of sex abuse by priests and the church’s attempts to hide it. He is currently the Donald W. Reynolds Visiting Professor, teaching investigative journalism to students at the Walter Cronkite School of Journalism and Mass Communication at Arizona State University.

The Globe investigation was made into the movie “Spotlight,” which won the 2015 Academy Awards for Best Picture and Original Screenplay. Actor Michael Keaton portrayed Robinson in the movie.

Robinson was the featured speaker of the 11th annual Paul J. Schatt Memorial Lecture on Monday night at the Cronkite School at the Downtown Phoenix campus.

He said that when “Spotlight” won the Best Picture Oscar a year ago, it was a bright spot for journalists after years of turmoil due to declining revenue, and an “affirming moment” for journalism students.

“To the new president, journalists are scum. Not just some of us. All of us.

“This effort to delegitimize journalism is a major imperative of his White House.”

“A man who poses the gravest threat to individual liberties is also paradoxically the tonic we need,” he said.

Trump, at a recent conservative political conference, said “the fake news” is “the enemy of the people.” Later, mainstream outlets including CNN and The New York Times were blocked from a White House briefing. Reporters from Time and The Associated Press boycotted the briefing in protest.

Robinson, meanwhile, said that the term “investigative reporter” can be confusing.

“I was just a reporter who loved to dig out page one stories — stories people didn’t want me to find,” he said, and noted that big stories are everywhere.

“There is no story you’re assigned for tomorrow’s newspaper that doesn’t have buried in the fourth or fifth paragraph a much better story,” he said.

Robinson noted that the Spotlight team’s sex abuse investigation was prompted when the reporter who covered courts wrote about the victims’ lawsuit, and he lamented that many newspapers have been forced to cut back on local reporting.

“Local news organizations are what all of us have depended on for decades to keep us informed on important issues. Matters that aren’t ideological. Reporting that makes sense of what’s going on around us and helps us make intelligent decisions about where to live, what schools are good, how safe we are and whether our tax dollars are wisely spent,” said Robinson, who said that the Boston Globe no longer regularly covers the courts.

“To me, the magnificence of the First Amendment has lost a little of its luster because there are many fewer journalists to exercise the rights it guarantees,” he said.

“The public is alarmed and wants more accountable reporting and for the moment at least, they seem willing to pay for it,” he said.

The Cronkite School established the Schatt Lecture series in 2007 in honor of former Arizona Republic reporter, editor and columnist Paul J. Schatt, who taught public affairs reporting to Cronkite students for more than 30 years as an adjunct faculty member. The series in his name is supported by an annual gift from The Arizona Republic and an endowment created in Schatt’s memory by his widow, Laura Schatt-Thede.

Walter Robinson, the current Cronkite School Donald W. Reynolds Visiting Professor, answers a question about the media's role in Donald Trump's election. His "Must See Monday" speech in the First Amendment Forum about the future of democracy and investigative journalism was attended by over 100 people. Photo by Anya Magnuson/ASU Now

Univision Arizona and the Walter Cronkite School of Journalism and Mass Communication have partnered to regularly broadcast a 30-minute news program produced by bilingual Arizona State University students on important Latino community and statewide issues.“Cronkite Noticias” airs on Univision Arizona’s KFPH UniMás every other Friday from 4 to 4:30 p.m. during the academic year. The first ep...

“Cronkite Noticias” airs on Univision Arizona’s KFPH UniMás every other Friday from 4 to 4:30 p.m. during the academic year. The first episode aired on Feb. 17. Students report on the economy, education, sustainability, immigration and other issues important to the region’s Latino communities. 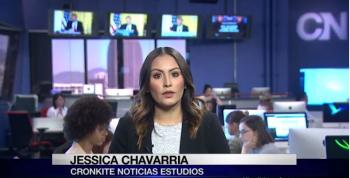 “Creating opportunities for young bilingual journalists and media professionals to sharpen their craft and to tell stories that are critical to our Latino community is more important than ever today,” said Roberto Yañez, vice president and general manager of Univision Arizona and a member of the Cronkite Endowment Board of Trustees. “It is with great pride that we kick-off this new partnership with the Cronkite School that will allow us to give a platform to the next generation of leaders in the field.”

“Cronkite Noticias” is part of Cronkite Noticias/Mixed Voces, a new multiplatform Spanish-language news operation at the Cronkite School, which began last month. It is made possible by the Raza Development Fund, the largest Latino community development financial institution that is dedicated to generating economic growth and opportunities for Latino families across the country.

Currently, a team of bilingual Cronkite students are producing a variety of in-depth, Spanish-language digital and video stories for cronkitenoticias.org, which houses the “Cronkite Noticias” program after airing on UniMás Arizona.

“We are thrilled to be partnering with Univision Arizona on this important endeavor to expand critical news coverage to the Latino community,” said Christopher Callahan, dean of the Cronkite School. “We’re excited to share the outstanding work of our students, who regularly cover Latino issues under the guidance of our award-winning faculty.”

The “Cronkite Noticias” program is part of a growing constellation of classes and immersive professional experiences available to Cronkite students interested in Latino and borderlands issues.

Cronkite News, the student-staffed, professionally led news division of Arizona PBS, features a Borderlands Bureau in which students cover border and immigration issues in English under the guidance of award-winning borderlands journalists.

The Borderlands Bureau builds on a Latino seminar and a depth reporting class that takes students on a reporting trip to another country. Past projects have covered the Dominican Republic, Mexico, Nicaragua and Puerto Rico, among other regions.

The Cronkite School is widely recognized as one of the nation’s premier professional journalism programs. Students participate in 13 professional immersion programs, guided by award-winning journalists and communications professional, applying what they have learned in the classroom in real-world learning environments.