Should all drugs be legalized? Should doctors aid terminally ill patients who no longer wish to live? Should companies breach users’ privacy if it could possibly help others?

There is no clear-cut, right or wrong answer to these questions — the best answers will come from those who can best justify their reasoning. 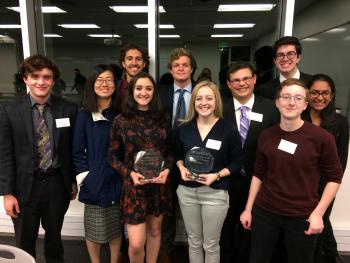 The ASU Ethics Bowl team members have proven themselves as one of the best college teams in the country at finding ethical solutions for real-world problems, earning the Arizona State University's first-ever bid to the National Ethics Bowl championship after taking first and second place at the Rocky Mountain Regional Ethics Bowl Competition this November.

Ethics Bowl team members shy away from the yes/no, black/white responses and hardline stances more typically associated with debates. Here, you can agree with your opponent without undermining your argument. Instead, teams are judged on how well they understand and articulate the specifics behind a given case.

“What frustrates me about debate is that it comes down to the affirmative or negative side,” said Jennifer Brian, head coach of ASU’s Ethics Bowl team. “What Ethics Bowl gets you to do is to see that there aren’t ever just two sides, but a whole set of complexities and that reasonable people can see the case from many different ways. One of the things that’s interesting about all the cases is that there are no easy answers, and I love that.”

Using cases taken from real-life situations — like the FBI’s attempt to compel Apple to hack into the iPhone of the terrorists responsible for the San Bernardino shootings — teams of five use various ethical frameworks to justify their solutions to these dilemmas.

Judges award teams points for their arguments, and the team with the most points after two rounds wins.

The ASU team has made impressive strides in short time. It was created in summer 2014 when Jason Robert, director of the Lincoln Center of Applied Ethics, asked Brian to head a prospective team. The team began competing the following semester.

“For the first two years we spent a lot of time discussing the cases and thinking about different ethical theories,” Brian said. “But I think what really helped is when we started doing the practice matches much sooner. Having them do more actual practices and then giving time to discuss what worked well or what worked less well, the points of weakness and the points of strength, allowed us to build up from there.”

The team practices two times a week to prepare for upcoming competitions, with each team member using their strengths in different ethical theories to contribute.

After two years of competing in Seattle, ASU sent two teams to the Rocky Mountain regional that swept the first- and second-place spots, guaranteeing the university’s first bid to the National Ethics Bowl competition taking place in Dallas in February 2017.

“It was a really exciting thing to go in and see so much success even without too much experience,” said communications freshman and Barrett, The Honors College student Corbin Witt, a member of the team that took second place at regionals. “That’s a credit to Dr. Brian and [assistant coach] Isaac Dunn, just how well they prepared us. It was just a really cool thing.”

The ASU team will receive the cases that will be selected for nationals in January.

Thunderbird School of Global Management’s campus in Glendale is always filled with excitement, but no day rivals the excitement felt on Preview Day. This is when prospective students and their families visit the historic campus to spend a day experiencing the life of a T-bird.During Preview Day each November, the school inspires people from around the world to visit campus and experience firstha...

Thunderbird School of Global Management’s campus in Glendale is always filled with excitement, but no day rivals the excitement felt on Preview Day. This is when prospective students and their families visit the historic campus to spend a day experiencing the life of a T-bird.

During Preview Day each November, the school inspires people from around the world to visit campus and experience firsthand what global education is all about. The event also allows prospective students to explore the value and adventure that awaits them if they become part of Thunderbird’s 70-year-old, long-standing global network. 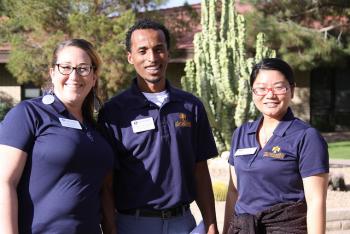 This year there were 21 countries represented among the attendees.

During the visit, one of the prospective students said, “The diversity on campus was a dream come true for me. I couldn't have been happier with my visit.”

While meeting with faculty, another visitor commented, “The diversity and dedication to academic excellence really draws me. I like the fact that [Thunderbird focuses] on hands-on experiences … and is more than willing to help with getting an internship.”

• an overview of Thunderbird’s specialized degree programs and campus life
• networking opportunities with the diverse Thunderbird community
• a catered lunch with faculty and current
• a preview class on “Reputation vs. Brand” presented by acclaimed Thunderbird Professor Richard Ettenson, Ph.D., a recognized expert in brand management, global strategy and marketing

As with all Thunderbird Preview Days, November’s event concluded with a memorable “Regional Night” focused on the Western Hemisphere and hosted by Thunderbird students from around the world. Thunderbird Regional Nights are a long-standing campus tradition showcasing the food, culture and traditional dress of a featured region of the world. November’s event was led by Thunderbird’s African Business Club, Middle Eastern, North African Club (MENA), and Latin American Club. The displays of different cultures were at their peak, as attendees enjoyed the diverse cuisines, music, dances and performances from these global locations.

Visiting Thunderbird’s campus helps prospective students to get a true feel for the "Thunderbird Mystique" and discover what makes Thunderbird a unique social, cultural and educational environment that can launch a global career.