The Association of Public and Land-grant Universities named Arizona State University among four winners of its fifth annual Innovation & Economic Prosperity University Awards this week. The award winners were announced at the APLU annual meeting in Austin, Texas.

ASU won in APLU’s Connections category for a number of the university’s successful initiatives, including creating the Polytechnic Campus from a decommissioned U.S. Air Force base, the development of the downtown Phoenix campus, and the growth of the SkySong partnership between the ASU Foundation, the city of Scottsdale, the Plaza Companies and Holualoa Companies. Additionally, the APLU recognized ASU’s success in developing a partnership with the Mayo Clinic, and in expanding access to higher education through programs such as the Starbucks College Achievement Plan and the ASU Preparatory Academy. 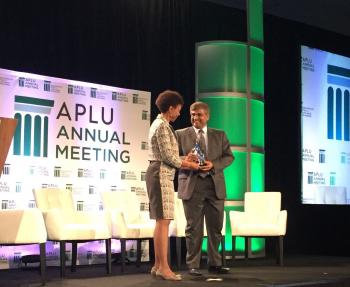 “This designation by APLU is an honor and tribute to all of ASU and our dedication to the growth and prosperity of our communities,” said Todd Hardy, senior economic development advisor in ASU’s Office of Knowledge Enterprise Development. “We appreciate it very much and will now use the platform to expand and improve our engagement programs in the future.”

The APLU’s “Connections” award category recognizes the institution that is doing the most to build connections between all categories of economic engagement — innovation and entrepreneurship, talent development, and social, community and cultural development.

“Economic engagement is a central component of public universities’ work,” said APLU President Peter McPherson. “Public institutions are working to advance economic opportunity and drive prosperity in their communities. The IEP Award winners have established themselves as exemplary institutions in this space, and we applaud their important leadership.”

As 2016 shapes up to be the warmest on record, according to the World Meteorological Organization, international climate scientists are meeting in Morocco this week to discuss implementation of the Paris climate talks. Paris brought together representatives of more than 200 nations across the world to talk about the common problem of global warming.Sonja Klinsky, an ASU assistant professor in the ...

As 2016 shapes up to be the warmest on record, according to the World Meteorological Organization, international climate scientists are meeting in Morocco this week to discuss implementation of the Paris climate talks. Paris brought together representatives of more than 200 nations across the world to talk about the common problem of global warming.

Sonja Klinsky, an ASU assistant professor in the School of Sustainability, is presenting research on strategies for global cooperation on climate and human well-being at the meeting in Marrakech. Klinsky and others note that while scientists generally agree that human activity is accelerating Earth’s warming trend, president-elect Donald Trump has called it a hoax. 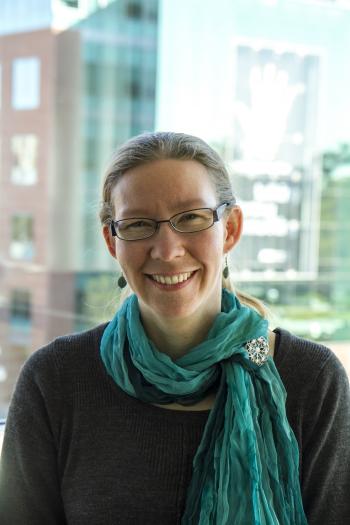 Trump’s election has been a hot topic of discussion during the meeting in Marrakech. Here Klinsky gauges the meeting and discusses her concerns on the future of global climate cooperation.

Question: Why are you concerned about the policies of the U.S. president-elect?

Answer: President-elect Trump can do long-term damage to the Paris agreement and global efforts to manage climate change in two ways. He could abandon the U.S. position on Paris, which includes revoking the energy and environmental regulations created by the Obama administration. He could also fundamentally disadvantage the ability of American businesses to become leaders in a clean, low-carbon economy. This has long-term negative impacts both globally and for all Americans.

Q: What will it mean if the U.S. pulls out of the Paris agreement?

A: A U.S. decision to pull out of the Paris agreement would be bad news both for the U.S. and for the rest of the world. Dealing with climate change is important for all countries. Parts of the U.S. — including Alaska, Florida and the Southwest to name a few — are extremely vulnerable to climate impacts. A global failure to deal with climate will hurt millions of Americans, but a successful global response is impossible without the U.S. Global success requires cooperation. As one of the richest countries in the world, with some of the highest levels of technological innovation, U.S. skills and knowledge are essential for managing this challenge.

Q: How much damage would it do to our standing worldwide?

A: Pulling out of the Paris agreement would be extremely detrimental to our international reputation. Similarly, eliminating domestic policy plans would also devastate the ability for American negotiators to work cooperatively with other countries. Already there are long-standing tensions and questions about the American commitment to climate action. Cumulatively the U.S. is the single largest emitter of greenhouse gases. Breaking a promise by pulling out of this agreement or by removing domestic regulations would profoundly erode international trust in an arena in which collective action and cooperation is crucial. Under the president-elect’s intended climate and energy policies it would be almost impossible to ask other countries to cooperate. Under this plan the U.S. will sacrifice any form of leadership or authority it has had on the climate agenda.

Q: How would it be harmful internationally?

A: Other countries are taking action regardless of the U.S. and this is creating new opportunities for them. By explicitly blocking all innovation opportunities relating to a rapidly changing low-carbon economy, the U.S. will miss out on leading these new businesses. China for instance is seriously investing in renewable energies and strategies for supporting economic growth that are less resource intensive. The President-elect's plan systematically disadvantages young Americans as other countries will continue to innovate towards a low-carbon economy, while the U.S. only looks backwards.

Q: How could it be damaging internally?

A: Failing to take climate change seriously creates two profound domestic damages. First, millions of Americans are vulnerable to climate change impacts – including permanent flooding; destruction of land; lack of water; and increased health risks – and this is going to get worse. Abandoning the climate agenda essentially equates to abandoning the physical security of Americans located in climate-vulnerable communities.  Second, responding to climate change is creating opportunities for new technologies and businesses. Failing to create steady leadership in this area makes it more difficult for U.S. entrepreneurs and businesses to invest in these areas, resulting in an accumulation of lost economic opportunities. Without climate action, future generations of Americans will be worse off both environmentally and economically.

Q: What is the mood in Marrakech?

A: The American election has been devastating to all, especially to those American businesses and non-profits committed to creating leadership in efforts to address climate change. If the President-elect and his supporters carry through with all of his plans they will have significantly contributed to a world with less trust, goodwill or cooperation, which has profound repercussions not only for climate but for every other issue of global security.