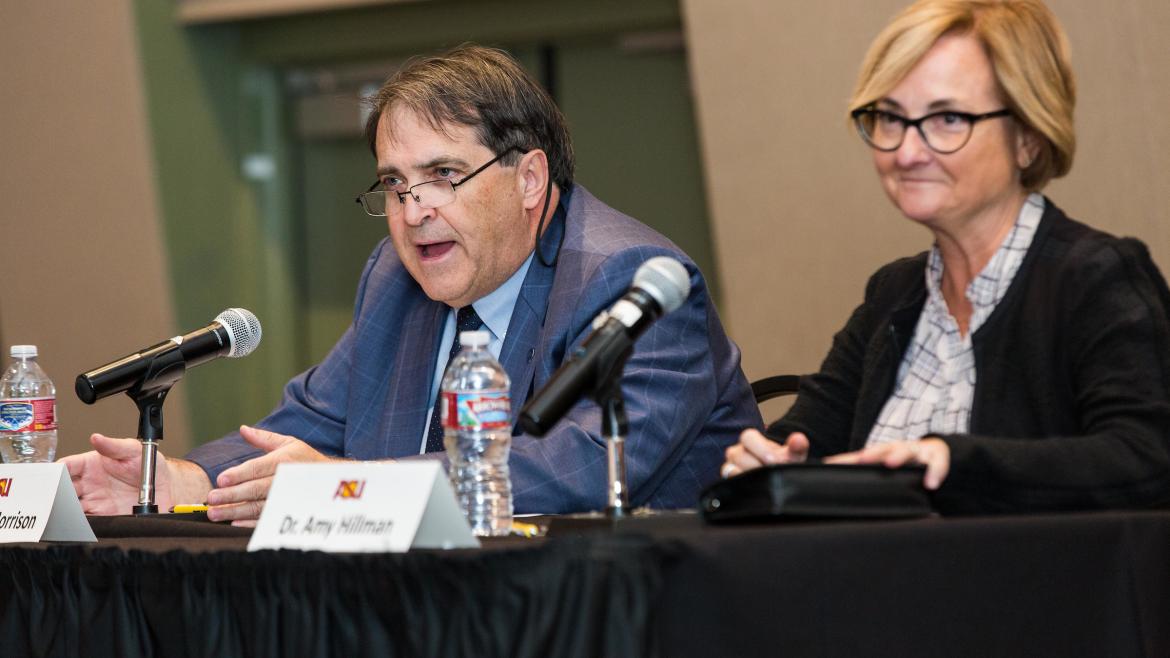 Companies, like individuals, need to embrace change and diversity in order to innovate — and innovation is the future of business, according to two of Arizona State University’s top business experts.

“It used to be that you could develop a product or service that was world-class and it was hard for others to catch up, but now we’re in a system in which organizations have to constantly innovate to stay one step ahead,” Amy Hillman, dean of the W. P. Carey School of Business at ASU, said.

“The rate of change is quicker than ever before, and you need diversity more than ever. You need people who are saying, ‘Should we be doing it this way just because it’s always been done this way?’ ”

Hillman joined Allen Morrison, chief executive officer and director general of the Thunderbird School of Global Management, in giving a talk titled, “Leading Business Forward: The Secrets of Modern Business Evolution” at ASU’s West campus in Glendale on Monday. The event was sponsored by ASU’s New College of Interdisciplinary Arts and Sciences. Hillman is a professor of management and holds the Rusty Lyon Chair in Strategy. Morrison became CEO in 2014 at Thunderbird, which formed a partnership with ASU in 2015.

Hillman said research proves that companies with the most diversity perform the best.

Morrison agreed, saying diversity is essential to innovation, but he added that change has been accelerating so rapidly that people can become overwhelmed. For example, the average grocery store has about 40,000 products, with 15,000 new products a year, while the average household buys about 150 products. “Why take a risk on a new kind of shampoo?” he asked.

The most successful businesses will be the ones that not only recognize the need for change, but can get their employees on board, Morrison said.

“Companies need to find ways to engage people to feel comfortable and competent to manage change,” he said. “That’s the biggest challenge for leaders.”

And it takes perseverance.

Morrison said that American companies are already ahead of companies in emerging markets such as China and India because the U.S. has more natural diversity. He said that years ago, he was brought into a huge Japanese company that was having trouble getting results from divisions outside of Japan. But every one of the company’s eight CEOs and 256 division vice presidents was a Japanese man.

“Did they know they had a problem? Yes. How big a challenge was it? Huge,” he said.

Both Hillman and Morrison said that the ability to embrace change is especially important among current students, who likely will have many careers over their lifetimes — some of which haven’t been invented yet.

“The first job you get will not be your last, but you’ll learn a lot and you can get to where you want to get. Don’t overthink it,” Hillman said.

“The path might not be linear, and staying open to new things is critically important.”

Photo: Allen Morrison, CEO of the Thunderbird School of Global Management, and Amy Hillman, dean of the W. P. Carey School of Business, discuss the importance of diversity during a special event titled "Leading Business Forward: The Secrets of Modern Business Evolution," at ASU's West campus on Monday. Photo by Deanna Dent/ASU Now

The weekend's main event is the Maroon & Gold intrasquad on Saturday (7 p.m.) at Wells Fargo Arena. ... The weekend's main event is the Maroon & Gold intrasquad on Saturday (7 p.m.) at Wells Fargo Arena.