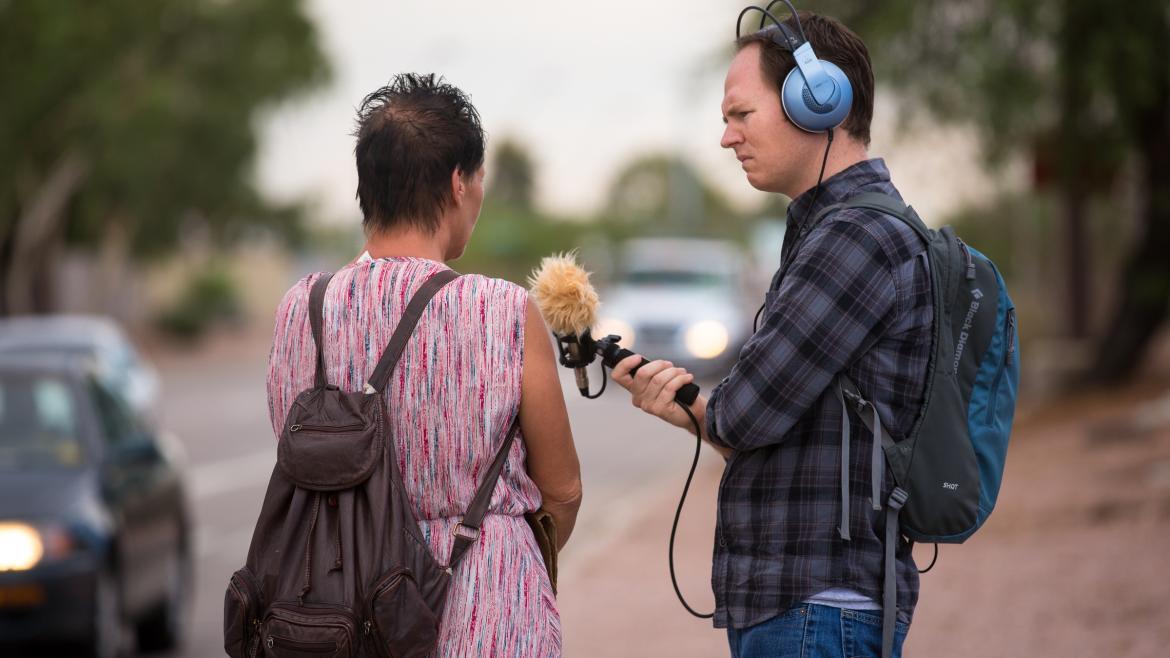 The art of the academic podcast

Podcasts have exploded in popularity. The digital broadcasts are known for specialized subject matter and hosts who communicate complex ideas to a diverse audiences — something the similarly popular TED talks are beloved for (and there’s a podcast for that now, too).

ASU English doctoral student Steven Hopkins — who describes himself as “obsessed” with the digital audio files — hopes to capitalize on the craze with his podcast "Writing Questions," which explores the role of writing in our everyday lives and cultures.

A military brat (episode six of "Writing Questions" explores the role of writing in the U.S. Army), Hopkins moved around a lot as a child, at varying times calling Idaho, Virginia, California and South Carolina home. The experience tuned him in to a natural ability.

“I remember when I was a little kid, we spent a lot of time in Idaho,” he recalled. “And I remember being 6 or 7 and being able to distinguish that in Idaho they say ‘pop,’ and (elsewhere) they don’t. Or that everyone ends their sentences with ‘huh?’ That’s just something I picked up on. I’ve always kind of had an ear for how people talk, and always cared about it.”

Something else he cared about was “making stuff.” The need to create led him to an interest in photography, then filming (some of his work can be seen on YouTube). Getting into podcasts, he says, was just the next logical step.

So with a topic in mind, he began reaching out to friends and acquaintances with unique and varying interests related to writing and asking to interview them.

It’s been a year and a half since Hopkins started out on this venture, and in that time he’s interviewed an Army captain, a thrift shopping professor and a tattoo-seeking friend (among others) — all the while, tying each of their personal stories to writing.

In between dialogue, he sometimes takes a moment to unpack what he calls “these really cool thoughts and ideas” that might otherwise be confined to discussions among a small group of people in a classroom.

In episode four (“Tattoos”), he talks about the concept of “asynchronicity”:

“When a person writes a poem, or paints a painting, or designs a website, their audience will experience it away from the creator. This is what scholars call ‘asynchronicity’ — not being in the same place at the same time. With a lot of creation, we don’t get much control over the ways that people interpret it because we can’t be there next to them to clarify for them what our intentions were. But with tattoos, that’s a little different. The creation goes with us.”

Hopkins loves the fact that his podcast allows him to delve into more sophisticated subject matters in a way that’s easily understood.

“I feel that the scholarship that I read — the academic scholarship — seems like it stays in these books, right? There’s really interesting stuff, but it kind of gets siloed in our own community,” he said, “and I want people in a bigger audience than just my scholarly community to have those ideas and be able to talk about them and share them.

“So, if I can translate these really big ideas that we have in my scholarly community into words that are more open and accessible to a lot more people, then that’s something that I’d like to do.”

He also hopes with his podcast to bring greater visibility to the accomplishments and excellence of ASU’s writing program. In the tattoo episode, he sat down with ASU English professor Gregory Castle, who has been experimenting with a new approach to literature in his English 200 course that focuses on body and body art.

Right now, Hopkins is teaching a business writing course in which he assigned students extra credit for listening to a podcast about entrepreneurship, then recording their own to reflect on what they’d learned. Eventually, he’d like to incorporate digital storytelling into a course in a more concrete way, teaching it as a form of composition.

You can listen to Hopkins’ podcast, "Writing Questions," on SoundCloud at: www.soundcloud.com/writingquestions. You can also check out his work and that of his fellow scholars on their Facebook group, Podcasts in Rhetoric and Composition, @rhetcompcast.

Read on to learn more about Hopkins’ DIY approach to creating a podcast and some of the challenges associated with it. 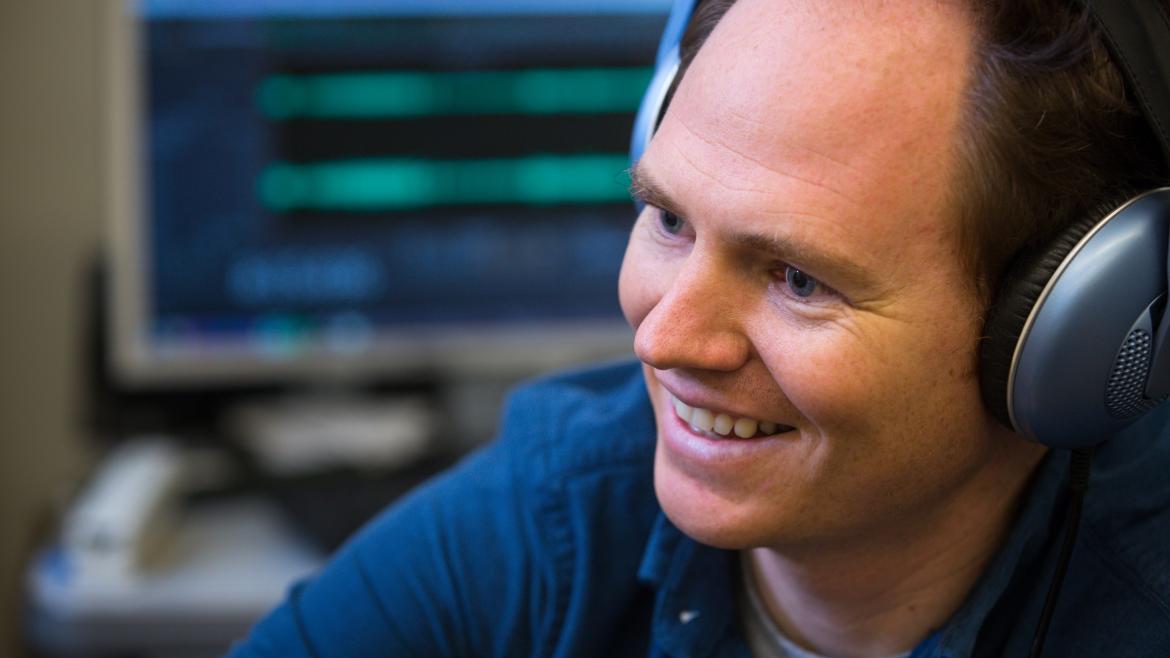 Recently, Hopkins was working on a piece about freeway panhandlers (depicted in photo at top), asking them about the messages they write on their signs. A bit hesitant at first, the more he spoke to them the more comfortable he became, resulting in some great conversations. Unfortunately, it wasn’t until he was headed back to his car that he realized his recording equipment had malfunctioned.

“I learned a lot about how to proceed with this project. I know that the questions I was asking are worth asking, and I learned a little more about what to expect. And I definitely learned to triple check the recorder before forgetting about it and asking questions.”

On the meaning behind the name of his podcast:

“'Writing Questions' kind of has three meanings to it. There’s like, the question of ‘What are you doing?’ Well, I’m writing questions. So that’s like present progressive tense. Then, one thing that the podcast is, is writing questions; questions about writing. And the third thing is kind of like a sentence in itself: Writing questions. Like one of the things that writing does is it brings up questions.”

“My wife made a lion costume for one of my sons for Halloween, so I took part of the lion’s mane and cut it out and just hot glued it (as a makeshift windscreen; which funnily enough, are sometimes called ‘dead cats’), because this microphone gets really bad wind noise.”

Some tips for making a good podcast:

• “I listen to people talk about what makes a good radio story, and one guy was talking about how if there’s motion around the microphone — if you’re just sitting there, then it sounds like you’re just sitting there. But if you’re moving, it’s more fun for the person listening to it because they feel like they’re going on an adventure with you. So I really wanted to — if I was gonna talk about tattoos — have some motion, and to actually go and do something and see something happening.”

• “If you want to create that feeling of intimacy, you really gotta get the microphone as close to the person as you can so that when the person puts their headphones on and they’re listening to it, it feels like the person is right there. So much of it is trying to re-create this feeling of an intimate conversation. Usually what I like to do, is if I’m sitting down with somebody, I’ll do a headphone splitter so that I’m wearing headphones and they’re wearing headphones. Because it creates a really intimate experience of them hearing their own voice [as we’re talking].”

Some lessons he’s learned along the way:

• “I’m kind of klutzy, so I get tons of bad handling noise if I’m holding the microphone. So I bought this shock mount so that I don’t have to worry about being clumsy and making noise.”

• “I have one cable — it’s a y-splitter cable — so it goes into two channels. One I record at a higher volume, one at a lower volume. So if somebody yells or shouts, then I’ve got a safety track so I don’t lose anything, because I’d go out and try to record and come back and have just totally unusable sound. And you have to listen to yourself while you’re recording so that you know if something’s going wrong.”

• “I use Adobe Audition. And, I mean, I have experience with Premiere Pro and other Adobe software but there’s a pretty steep learning curve. You really gotta invest some time into understanding what’s going on. But there’s lots of tutorials on YouTube.”

Some of his favorite podcasts:

“I’ve got a big list. '99 Percent Invisible' is a really great one; that’s about looking at designed objects in our lives. They’ve had one about doors and buildings, ways to leave buildings and stuff like that. That one’s great. There’s one called the 'Allusionist,' and it’s a British lady who talks about the origin of words. There’s a few other academic-type podcasts … my friend Eric does one called 'Rhetoricity,' where it’s mainly interviews with scholars. One of my favorites is called 'Song Exploder,' where this guy interviews bands, and they take a song that they’ve got and they take every single track — the guitars, the bass, the drums, the vocals — and they break it all apart individually, talk about why they recorded each one each way, and then at the end, they play the whole song together. So you’ve got this renewed appreciation of everything that went into that song.”

His advice to would-be podcasters:

“You just have to do it. I mean, you really just have to jump in. My first episode — I think I did an episode zero, where I tried to do like, a “two-guys-on-a-microphone” thing, where you just talk and record it, and then you publish it. And I didn’t really like that format very much. Plus, the guy that I did it with wasn’t really enthusiastic about it; he didn’t want to do it again. So then I decided to try the storytelling thing. … Just trying to be a journalist and interview everybody and double-check things. Even though it took me, I think 60 hours, to put that first episode together, it was a really rewarding experience.”

Ontario, Canada – An amateur making his PGA Tour debut, competing amongst a plethora of golf's preemptive talent, Jared du Toit entered play Thursday at the RBC Canadian Open not widely considered a contender. Evidently a daunting task afforded to the Sun Devil senior-to-be, making Friday's 80-player cut was an accomplishment in of itself. ... Ontario, Canada – An amateur making his PGA Tour debut, competing amongst a plethora of golf's preemptive talent, Jared du Toit entered play Thursday at the RBC Canadian Open not widely considered a contender. Evidently a daunting task afforded to the Sun Devil senior-to-be, making Friday's 80-player cut was an accomplishment in of itself.