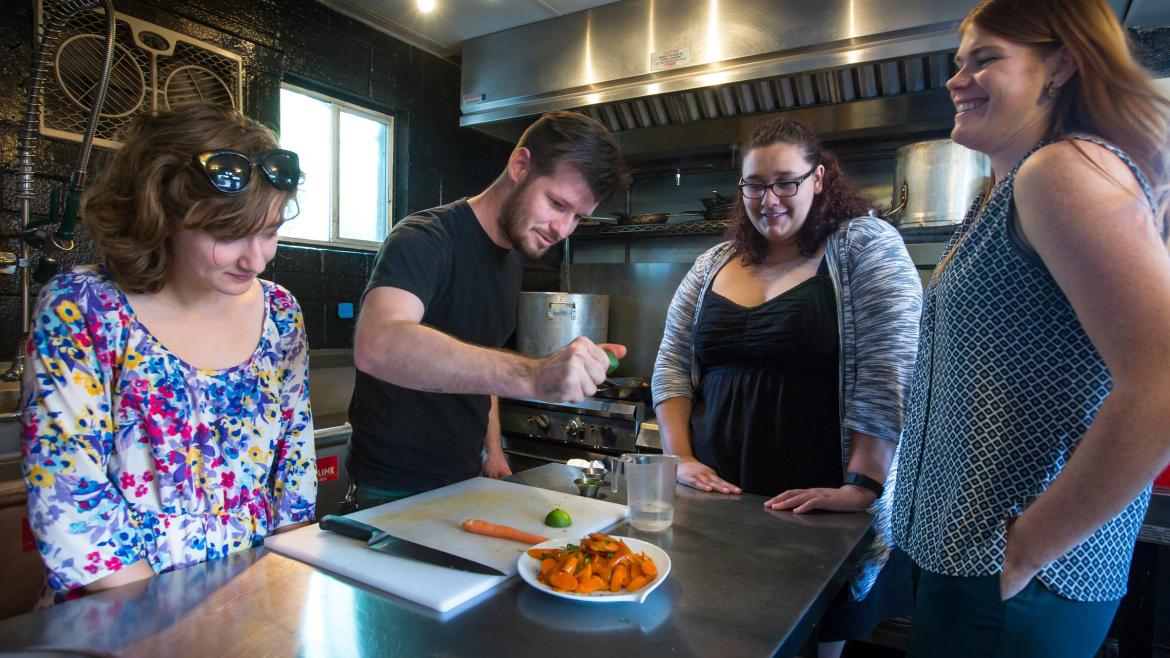 A recipe for feeding the underserved

Chef Liam Murtagh knows what it’s like to grow up food insecure.

As a child in Glendale, Arizona, his family struggled financially and got by on food stamps and funky nutritional concoctions.

“We’d eat things like cereal with water, or my mom would make syrup by mixing water and sugar. We practically lived on mac and cheese and kielbasa,” said Murtagh, who is the owner and chief executive cook at the Coronado in Phoenix.

“Other times we’d eat at the local VFW, and on a couple of occasions, a church group would bring us a food basket. This was in the early ’90s when there was an economic slowdown. As usually is the case, the poor are usually the first and most affected.”

Those memories motivated Murtagh to become a chef and are why he is throwing his support behind an Arizona State University-sponsored cookbook that features local produce and bilingual recipes, and which will be distributed for free in underserved communities.

They chose to address hunger when they learned of a few jarring statistics: one in five Arizonans, or approximately 1.16 million people, experiences food insecurity. Statistics from America’s 2014 Hunger in America, U.S. Census Bureau data and internal United Food Bank data reveal that one in four of Arizona’s children is not assured of his or her next meal.

“The reason why many farmers markets don’t come to the Phoenix area is because people would say ... ‘How do I eat this? How do I cook this?’ A big part is simply a lack of knowledge, and our bilingual cookbook addresses these issues.”
— Samantha Contreras, ASU communications major

Student research and a handful of visits from local leaders working on hunger led them to focus on marrying locally available farm produce and food-insecure communities, also known as “food deserts.”

“A food desert is a place or area that doesn’t have any fresh or natural produce available to that local population because there aren’t any grocery stores or farmers markets in the area,” Price said. “The only options they have to eat are mostly fast-food chains, and we all know that isn’t good nutrition.”

After considering a number of alternatives such as organizing farmers markets, initiating a traveling produce-vendor service and other innovative ideas, the class settled on a community-based bilingual cookbook after learning that much of the 80 or so varieties of local produce are unfamiliar to many residents.

“The reason why many farmers markets don’t come to the Phoenix area is because people would say, ‘I see that this is fresh and healthy, but I don’t know what to do with this. How do I eat this? How do I cook this?’” said Samantha Contreras, a 22-year-old communications major in the Hugh Downs School of Human CommunicationThe Hugh Downs School of Human Communication is part of the College of Liberal Arts and Sciences.. “A big part is simply a lack of knowledge, and our bilingual cookbook addresses these issues.” 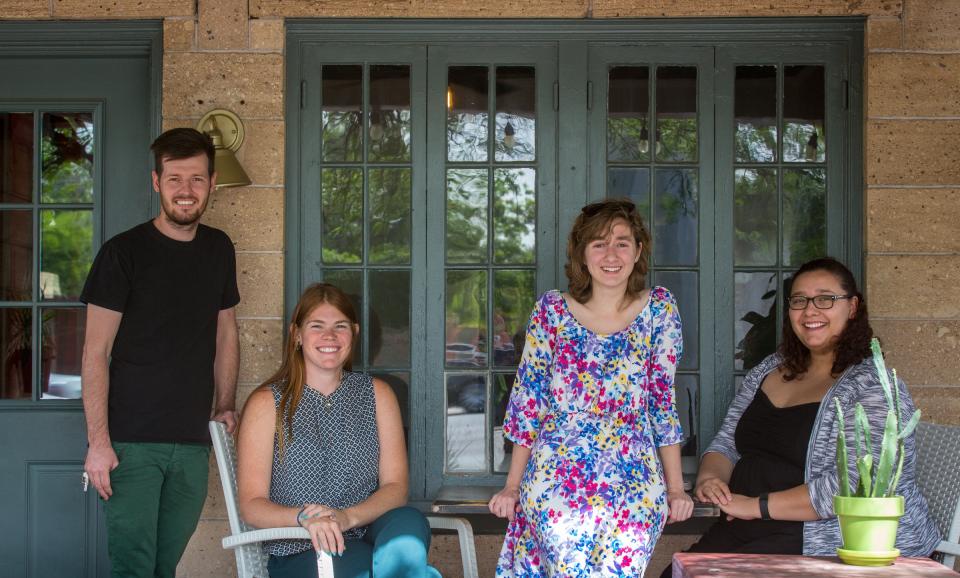 From left: Chef/owner Liam Murtagh of the Coronado poses on the front porch of his 100-year-old building with ASU students Angela Lashinske, Katerina Noori and Samantha Contreras on April 25. Murtagh (shown in the top photo making his agave-glazed carrots for the students) is one of several local chefs to donate a recipe for the student-created "Let’s Eat Local!" cookbook. Photos by Charlie Leight/ASU Now

Students said the project forced them to become more familiar with the issue of food insecurity and underserved communities.

“A cookbook is actually a very good way to engage the community and rally the chefs, who care about feeding people outside of their restaurants,” said Angela Lashinske, a 20-year-old senior who is majoring in supply side chain management at the W. P. Carey School of Business. “This project linked our passion with theirs and was an easy way for us to make an impact given our time limit.”

For Katerina Noori, a 23-year-old theater production major in the Herberger Institute for Design and the Arts who volunteers at the St. Vincent de Paul food bank in Phoenix, the project was a way to link her skills.

“As a theater production major, I do mostly backstage work and I make things happen, and this project was kind of similar,” Noori said. “I bring all the pieces together through organization and make sure people are communicating. That really helped me be successful in this project.”

In addition to their community work, students learned the nuances of putting together a book, which was no small feat. They knocked on doors asking chefs for recipes, created an index page of vegetables, worked with five translators to make sure the text was correct and graphically designed the cover page and inside text.

“It was a very collaborative process because we all did a bit of everything,” said Lashinske. “It was a great experience.”

Students are currently raising $6,000 through a GoFundMe page. A $20 donation gets the donor a digital copy; $30 for a physical copy. There are also options that include gift certificates to one of the participating restaurants.

Once that $6,000 total is reached, the class will distribute it for free to residents living in the communities between McDowell Road to the north and South Mountain, and between 16th Street and 19th Avenue, as well as to residents of the Salt River Pima-Maricopa Indian Community. The class will also sell cookbooks to the larger community to help defray printing costs.

Finding their own path

Editor's note: This is part of a series of profiles for spring 2016 commencement. See the rest here.Alexi Choueiri starts the twins’ story: “We left because of war.”In 2005, Lebanon erupted into war after the assassination of former Prime Minister Rafic Hariri. The Choueiri family fled Beirut, and 12-year-old Robert and Alexi left behind everything they knew to begin middle school in Arizo... 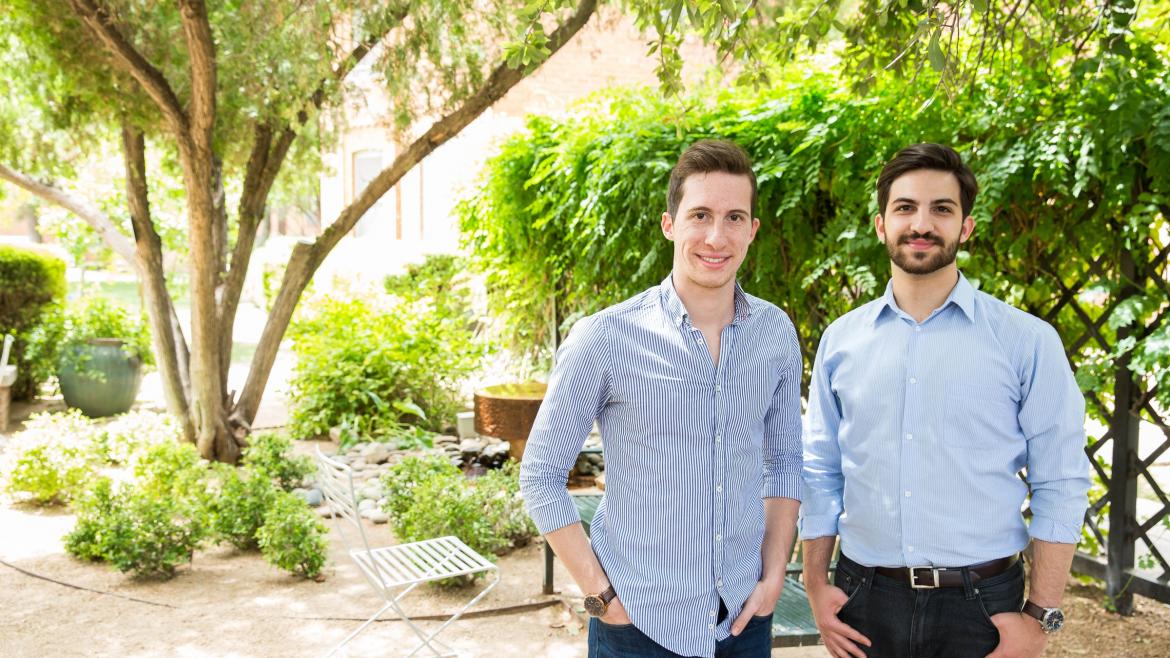 Finding their own path

Originally from Lebanon, soon-to-be-graduates twins Robert and Alexi Choueiri will embark on different careers after extraordinary journey together

Alexi Choueiri starts the twins’ story: “We left because of war.”

In 2005, Lebanon erupted into war after the assassination of former Prime Minister Rafic Hariri. The Choueiri family fled Beirut, and 12-year-old Robert and Alexi left behind everything they knew to begin middle school in Arizona.

It was tough. There was culture shock and dislocation. Although the boys spoke Arabic and French and went to an English-speaking school in Lebanon, Robert struggled with the language.

The two have not lived together during their time at ASU, but remained close.

“We’ve always been fairly independent as twins, but it has been a huge advantage going here as siblings because we’ve been able to feed off each other’s strengths,” Robert said.

Together as freshmen, they founded the ASU branch of Global Microfinance Brigades, a nonprofit that sends undergraduate students to developing countries to create community banking systems and teaches financial literacy. Both are Tillman Scholars, and Robert is a McCord Scholar as well as the Barrett Outstanding Graduate.

Now, with graduation approaching, the two will take separate paths after an extraordinary journey together.

“We don’t know what that’s going to be like, to be honest,” said Alexi, majoring in biochemistry and economics in the College of Liberal Arts and Sciences. “We were separated for the summer, but even then we made time to see each other.”

Last summer, Alexi was an Amgen Scholar at Harvard University and Robert worked as an investment analyst in the U.S. Foreign Service Internship Program in Washington, D.C., but they visited each other.

Robert — who is receiving his degree in economics from the W. P. Carey School of Business — said the change won’t be a problem.

“We’ve always been independent, but we came to each other when we needed it. We’ll find a way.” 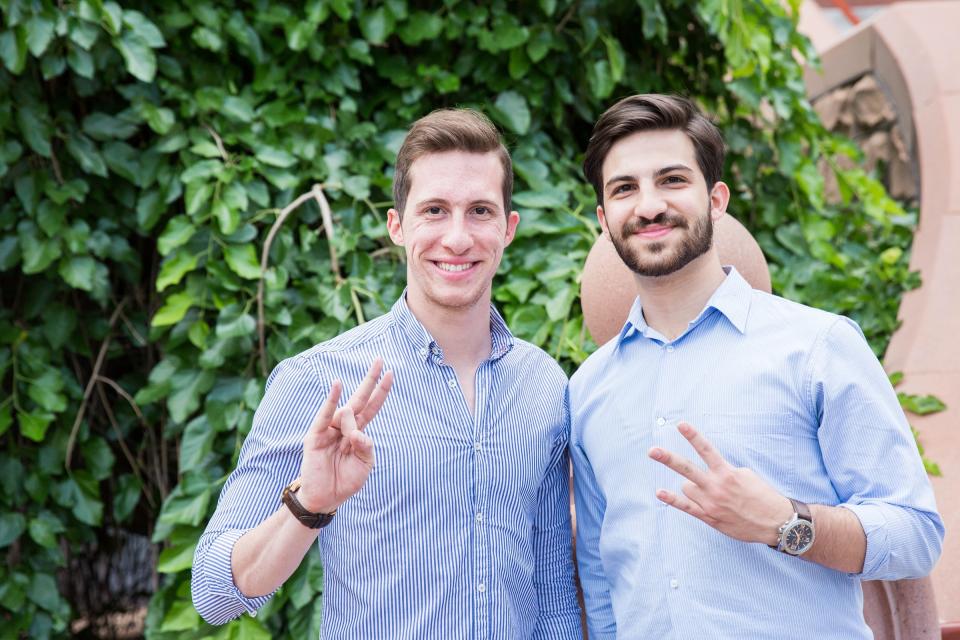 The two answered some questions about their time at ASU.

Answer:  Even in middle school, Alexi was interested in neuroscience. He has worked in the lab at Barrow Neurological Institute since high school.

“I had a deep interest in biology and what makes people tick. I joined a lab at Barrow doing brain-cancer research because my cousin had brain cancer. From that I transitioned to pure neuroscience,” he said.

The internship at Harvard last year convinced him to pursue a doctorate.

Robert was inspired by his family’s experience.

“The experience of evacuating and leaving everything I had known got me curious about international affairs and conflict. Before I got to ASU I was looking to do global studies, and then I realized that the root of a lot of issues stemmed from business and economic development.

Through the microfinance nonprofit, his job as a consultant at Arizona Microcredit Initiative and his work in Washington, D.C., he has seen how development works at an individual, regional and international level.

A: The two were pleasantly surprised at the flexibility they found at ASU with hybrid online classes and other ways to fit in their many activities.

“It gave us a big competitive edge,” Alexi said. “My brother worked during the week at many internships, and I was a given a lot of time to do my research. We were both able to be heavily involved outside of our coursework.”

A: The twins’ siblings had gone to ASU. Robert was in the Leadership Scholar Program and Alexi won a Presidential Scholarship.

“It was an easy decision,” said Alexi, who had also considered the University of California at Berkeley.

A: “Take time to explore your interests,” Alexi said.

“I think too many people have a self-imposed idea of what they want to do, and by the time they hit senior year, it doesn’t feel right. I looked into being a doctor, a dentist, a consultant. Until you expose yourself, you won’t get that gut feeling of what you want to do.”

Robert said there are two sides of finding yourself.

“Become rooted in complete selflessness, and at the same time, take a step back and make time to be introspective and reflective,” he said. “Those are the two elements to really fight for that ‘why.’ ”

Robert said, “There are little secret spots over there.”

A: Alexi will move to Cambridge to begin PhD studies in neuroscience at the Massachusetts Institute of Technology, funded by a three-year National Science Foundation Graduate Research Fellowship.

Robert is weighing two career options — one in Singapore and one in Washington, D.C.

A: Alexi would invest the money in research: “I’m very interested in unlocking how the brain works and particularly psychiatric diseases. I would like to find a genetic and molecular basis for neurological disorders.”

Robert would start an innovation fund: “I would invest in low-income, underserved entrepreneurs who would encompass social entrepreneurship and sustainable development.”