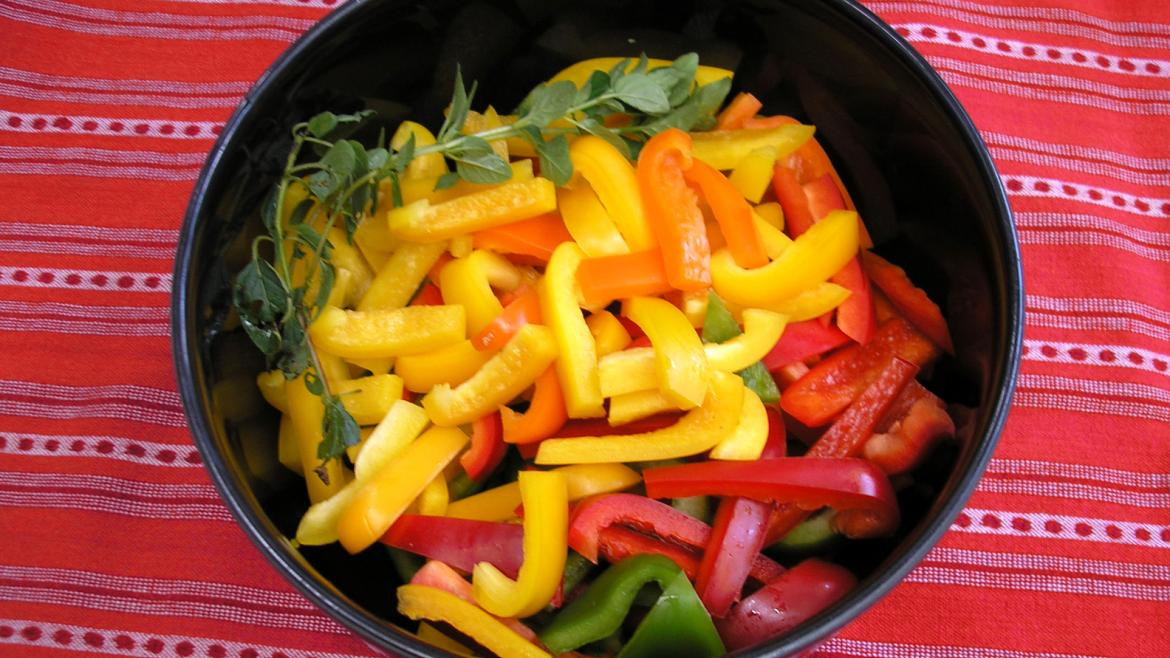 Setting the table for better health

In ASU’s teaching kitchens in downtown Phoenix, the din of cooking activity is peppered with the sounds of friendly conversation.

Just an hour ago, the white-aproned amateur chefs knew each other only casually. Now they are cooking shoulder-to-shoulder and sharing stories inspired by the food, such as eating nopalesNopal is a common name in Mexican Spanish for Opuntia cacti, as well as for its pads. and making tortillas with their grandmothers. They also discuss their roles in the cooking show they will record. As the group cooks, shares and later crafts a theater piece together, they are also promoting behavior that will help prevent type 2 diabetes.

A tall white chef’s hat bobs energetically about the room as the lead chef demonstrates tortilla-making techniques or asks someone to elaborate on a meal or recipe they remember. The man beneath the hat calls himself Mero Cocinero, the People’s Cook. Periodically he gestures broadly with a wooden cooking spoon or praises the participants in a booming voice.

The role of Mero Cocinero is played by Robert Karimi, a chef and performance artist. He joined faculty from ASU’s School of Film, Dance and Theatre and the School of Transborder Studies to create Cultural Engagements in Nutrition, Arts and Sciences (CENAS, which is the Spanish word for “dinners”). CENAS combines theater-making and cooking to promote behavior changes linked to healthy eating and type 2 diabetes prevention in populations at risk for the disease. At the same time, the program honors the cultural food pathways each participant brings to the table.

That theater-making can take the form of role-playing, but sometimes includes actually filming a cooking show. It's not just cooking, but a cooking experience, organizers said. 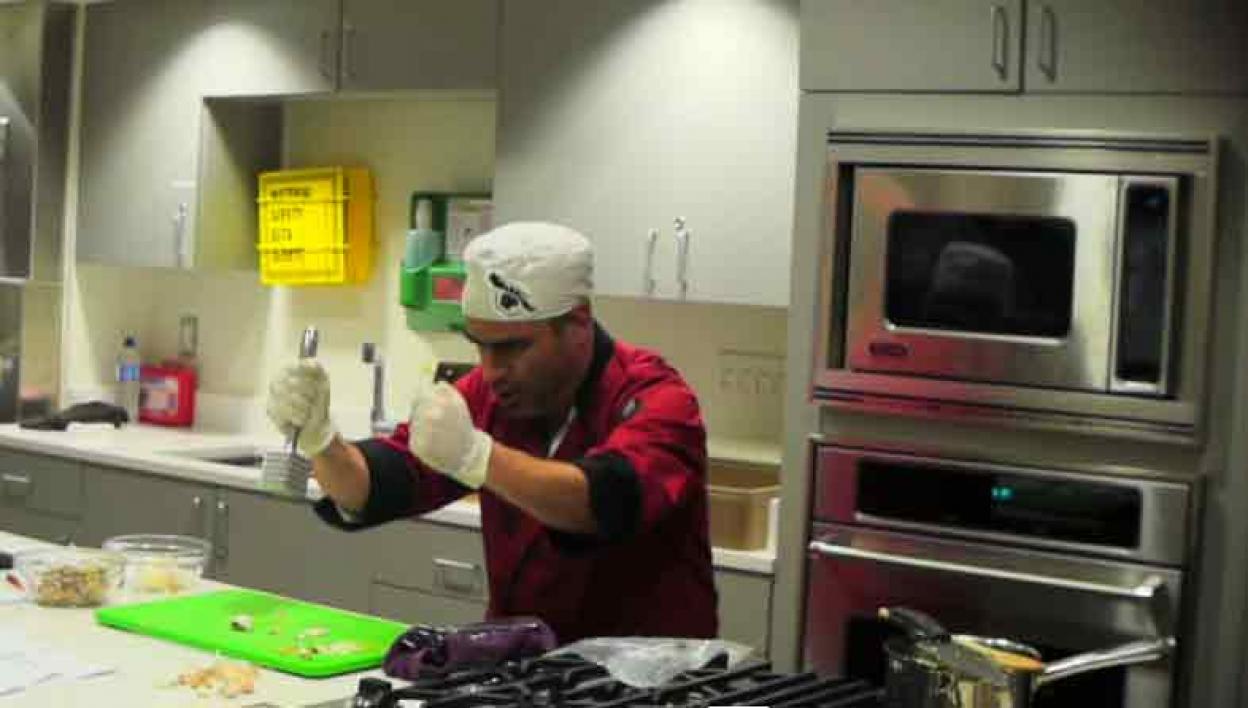 Mero Cocinero, the People’s Cook (as played by Robert Karimi), participates in a cooking demonstration. 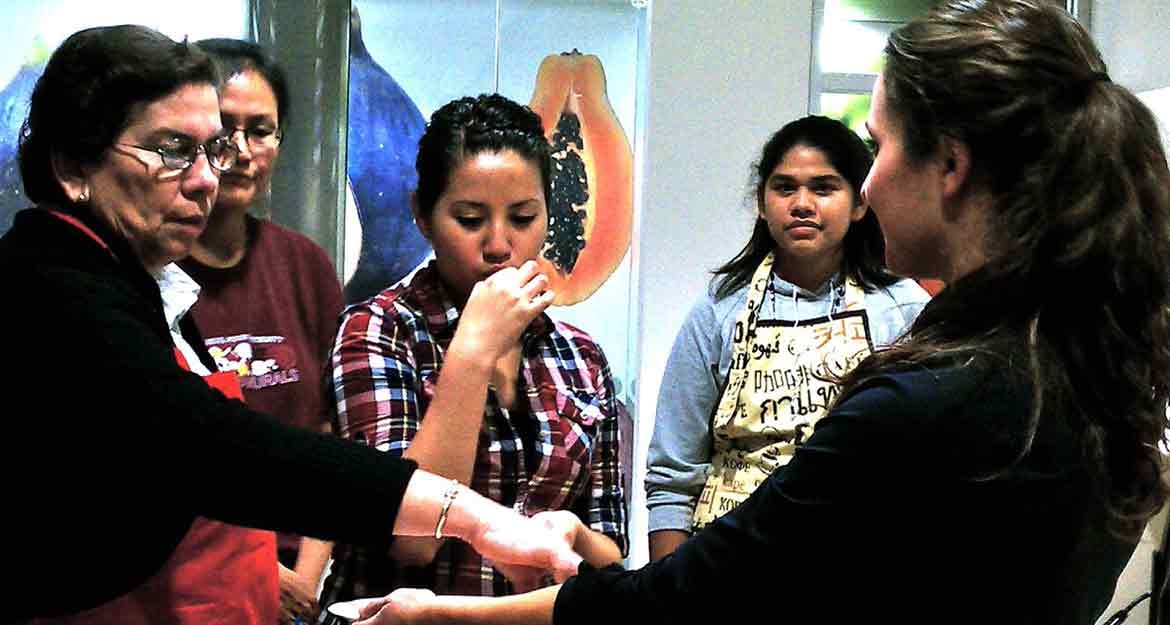 Tamara Underiner is associate dean for research in ASU’s Herberger Institute of Design and the Arts. She leads CENAS with colleagues Seline Szkupinski-Quiroga, faculty research affiliate with the Southwest Interdisciplinary Research Center; and Stephani Etheridge Woodson, associate professor in the School of Film, Dance and Theatre. The research is supported by the National Endowment for the Arts and by ASU’s Institute for Humanities Research.

The team designed the research methods and cooking curriculum for CENAS to evaluate the impact of a series of lively, immersive cooking experiences on the attitudes and behavior of participants. Over a three-week period, students, community leaders and professionals in south Phoenix donned aprons and began to mix, mince and marinate under the direction of Mero Cocinero.

Mero Cocinero enthusiastically guided participants to put on cooking shows, role-play as farmers or chefs or learn a new skill in the kitchen. With encouragement from Karimi and trained ASU students, participants shared stories about the recipes their grandmothers made, favorite holiday foods and memories of a childhood garden.

“Making theater together, honoring the stories your grandmother told while she was cooking the beans over the cookstove, those are the kinds of things that help people move to a position of strength to honor who they are and where they came from and to continue to cook together for the whole family's benefit,” said Underiner.

The CENAS team introduced ways to incorporate traditional foods into meals using the American Diabetes Association’s “plate method” of eating, which recommends filling half a plate with vegetables, one-quarter with starches and one-quarter with protein. Karimi emphasizes that eating culturally important foods is not inherently unhealthy, contradicting a message that some of the participants unfortunately have received, even from medical doctors. Instead, he explains, returning to the recipes and foods cooked by older generations and based in ethnic cuisine can be both healthy and empowering.

“This is the place to do this kind of work. If you have a good idea you can do it here.”
— Tamara Underiner, associate dean for research in ASU’s Herberger Institute of Design and the Art

“Food is the beginning, not the end. Food is both educational and is bringing the community together through food culture and joy,” said Karimi.

After the cooking experiences, participants reported eating more fruits and vegetables and having a more open attitude towards healthy eating. Importantly, participants also reported viewing healthy eating as a practice they could embrace and one that made them feel empowered.

Quantifying the effects of theater-making on behavior change and healthy eating is novel in the field of medicine. The results of this study are now being used to design broader intervention research that will comply with National Institutes of Health standards.

Karimi likens ASU’s transdisciplinary culture to the comedy improvisation rule of “yes, and,” which commands actors to consider unexpected outcomes and to collaborate with other performers.

The CENAS project would not be possible anywhere but ASU, said Underiner, because of the “yes, and” willingness of faculty to collaborate across academic disciplines and the support from university leadership to try something new.

“This is the place to do this kind of work,” said Underiner. “If you have a good idea you can do it here.”

Arizona State University recorded the lowest rates in violent crimes over the past two years among its peer institutions, according to data submitted to the U.S. Department of Education.Among the cities that surround those universities, the city of Tempe, home to the largest of ASU’s five campuses, ranked near the middle in the five most serious offenses tracked by the FBI. The host cities range... 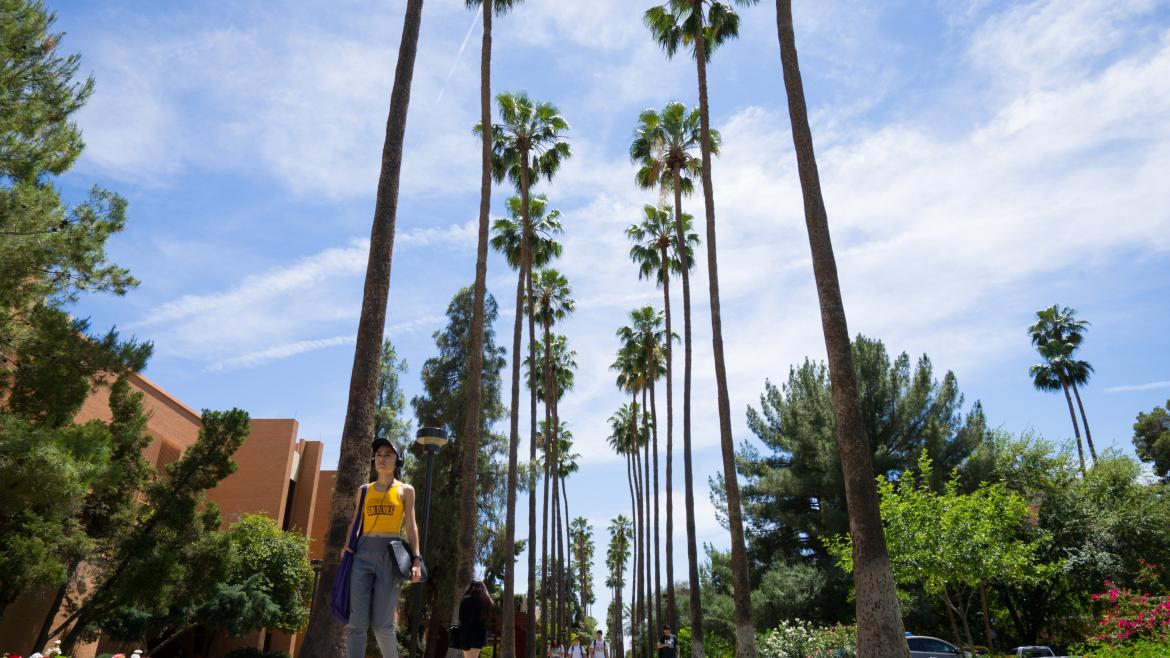 Arizona State University recorded the lowest rates in violent crimes over the past two years among its peer institutions, according to data submitted to the U.S. Department of Education.

Among the cities that surround those universities, the city of Tempe, home to the largest of ASU’s five campuses, ranked near the middle in the five most serious offenses tracked by the FBI. The host cities range from large metropolitan areas, such as Los Angeles, to small-town settings, such as State College, Pennsylvannia.

The statistics factor into a national debate about how crime is reported on college campuses. The federal Clery Act requires schools to report only offenses that occur within campus boundaries, and some lawmakers and advocates want a broader picture for assessing safety.

The overriding conclusion that criminologists and analysts draw from campus and city crime data is that campuses tend to be the safest place in town, said Chris Blake, executive director for the International Association of Campus Law Enforcement Administrators.

“There is longitudinal data from the Department of Justice,” Blake said, “that demonstrates campuses are far safer places than the general society.”

Looking at Clery data, ASU had the lowest rate in the categories of rape and aggravated assault among the 15 institutions the Arizona Board of Regents has designated as its peers for national comparison. No homicides occurred inside any of the campuses, so that category was omitted from analysis.

“When students enroll at ASU, they and their parents rightfully expect us to do everything we can to keep our students safe,” said ASU Police Chief Michael Thompson. “We are constantly working on new strategies and techniques to improve safety.”

The Clery Act requires annual disclosure of campus crime statistics and security information by postsecondary institutions. All schools must report stats in 22 crime categories, ranging from murder to liquor law violations. Crimes are also grouped by location — whether they occurred on campus, in nearby public property or off campus.

The data showed that reports of aggravated assault, burglary and motor vehicle theft at ASU in 2014 decreased by more than half in each category. The university reported an increase in robberies from six in 2013 to 10 for all metro Phoenix-area campuses (then numbering four) in 2014. 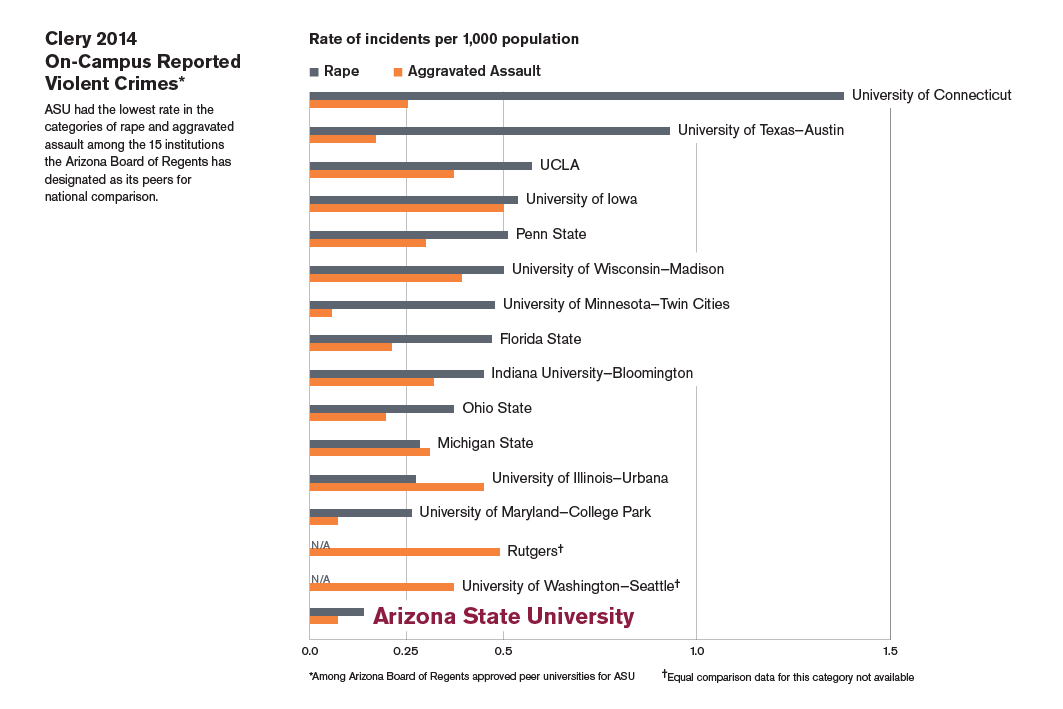 Even among institutions that may not qualify as peers, ASU ranked low in violent crime. ASU ranked seventh and eighth out of 10 respectively in the rate for rape and aggravated assault among the nation’s 10 largest schools listed in U.S. News and World Report.

Scott Decker, a criminology professor at ASU and expert on crime statistics, said the concerns over looking only at data within campus boundaries are understandable but that there is a danger in trying to create broader boundaries for assessing crime rates. Extending the geographic area analyzed for crime to try to include off-campus student activity most likely is an arbitrary judgment.

“Crime data, like voters in legislative redistricting, can be grouped in a variety of ways. The key question is where the boundaries are drawn and why they make sense,” Decker said. “Boundaries can be drawn to support a variety of conclusions. Where do you stop on the map? Where do you draw the line?”

Many students on ASU’s Tempe campus live in off-campus housing that would be included in Tempe’s reports but not in ASU’s reports to the Department of Education. But looking at crimes off campus also encompasses areas and events where few students may go. Tempe Town Lake, near campus, is the location of dozens of special events each year, drawing hundreds of thousands of visitors and a corresponding increase in reports of crime, yet many of those events draw few students, Decker said.

ASU also operates other campuses in the Phoenix area that vary dramatically in size and surroundings, from the densely populated Downtown Phoenix campus to the expansive surroundings of the West and Polytechnic campuses. Expanding the area for recording criminal offenses beyond one campus’ boundaries fails to account for the others, Decker said.

“A shopping center near campus undoubtedly accounts for a measurable number of car thefts,” Decker said. “But does that have any relevance to ASU students, most of whom do not have cars?”

Thompson emphasized the strong collaboration between ASU and Tempe police. He also highlighted the various tools at their disposal, such as safety videos on the university website, and methods of contacting police for immediate assistance, such as emergency call boxes throughout campus and the LiveSafe app that can be used to contact police, provide tips and even get an escort home.