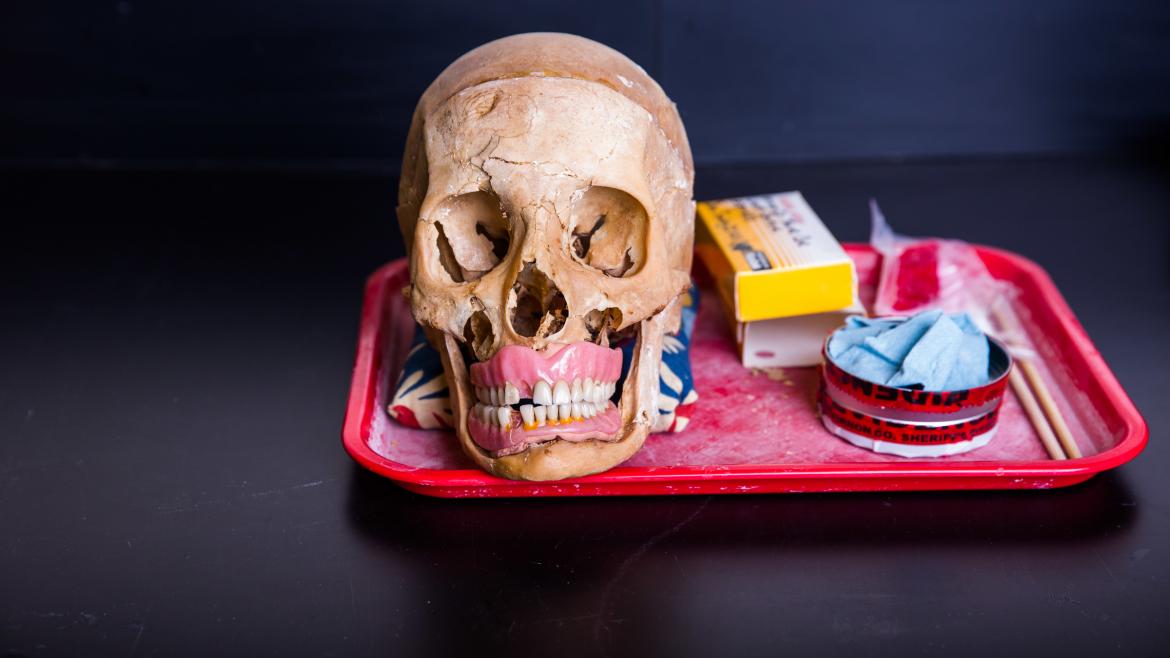 Putting a face on the nameless

West campus
Giving a face to a cold-case victim is a long but rewarding process.
Hands-on lab experience at ASU is essential for forensics students.
January 11, 2016

New ASU professor, his wife and a forensics student work to help identify one of the nation's missing and unidentified persons

Anthony and Catyana Falsetti met at a morgue in Broward County, Florida.

“She was working for the county sheriff’s office, I was a forensic anthropologist at the University of Florida, and I had been sent to the morgue to identify skeletons,” Anthony explained.

Today, things aren’t much different. Catyana is still working for the county, only now it’s the county of Maricopa, and Anthony is still working as a forensic anthropologistAnthony Falsetti serves as a Professor of Practice in ASU’s School of Mathematical and Natural Sciences, an academic unit of the New College of Interdisciplinary Arts and Sciences on the West campus. for a university, only now it’s Arizona State University.

He and CatyanaCatyana Falsetti works as a forensic artist for the Maricopa County Attorney’s Office. She is also a graduate student at Arizona State University and will be teaching the course “Documenting the Crime Scene” through ASU’s Criminology and Criminal Justice Program at the Downtown Phoenix campus for the fall 2016 semester. — a non-degree graduate student at ASU — are recent Valley transplants, having come to Arizona via the aforementioned “Sunshine State.” The fall 2015 semester was their first at ASU, but they’re already finding plenty to keep them busy.

Beginning with a request to help in the identification of the murder victim of a 1984 cold case from Wisconsin. 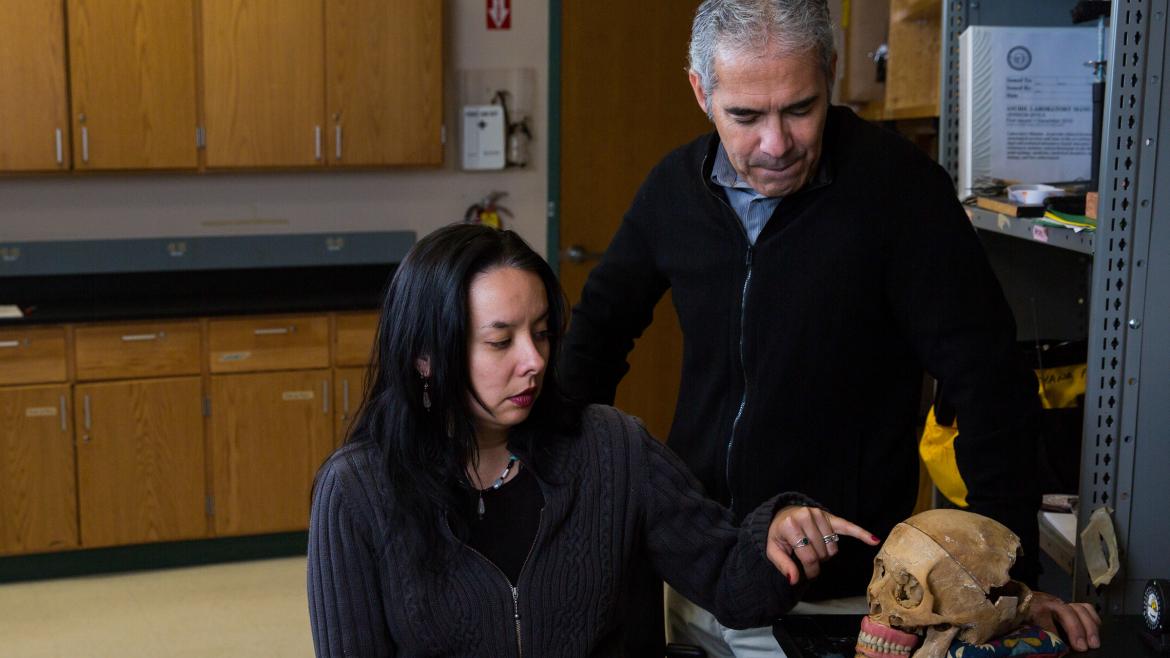 Anthony and Catyana Falsetti — he an
ASU professor, she a forensic artist who
will teach an ASU course this fall —
worked together on a skull (also shown
in the top photo) from a cold case.

The sheriff’s department in Wisconsin looked to Anthony because of his work in assisting with the creation of NamUs.gov, a first-of-its-kind website launched in 2010 at the behest of the National Institute for Justice to more efficiently identify missing or unidentified persons.

Besides basic stats like age, sex and ethnicity, photos of an individual can also be uploaded to the site. However, in some cases — as with the 1984 Wisconsin homicide victim — because a person’s identity is unknown, so is what he or she looked like.

Thankfully, talented forensic artists like Catyana are able to create 3-D facial reconstructions using the victim’s skull as a basis for adding layers of muscle and skin. With nearly 80 facial reconstructions under her belt and a 10 percent identification success rate (the national average is about 1 percent), enlisting Catyana’s help was essential.

Before she could get started, it was Anthony’s job to prepare the skull, which was badly damaged due to the manner of death. With the help of ASU forensics junior Kori Dowell, Anthony began the first step: maceration, or removal of the remaining soft tissue, at their West campus lab.

Most skulls of individuals who have been deceased for 30-plus years do not have any remaining tissue because of the natural process of decay. However, in this case, the victim had been embalmed before burial, which preserved some of the soft tissue, though not enough to get an accurate idea of what she looked like. Thus, it had to be removed in order for Catyana to be able to build an accurate likeness, as extra tissue on the skull would provide inaccurate measurements of the bones.

The process of maceration consists of submersing the cranium in warm water for a number of days, then removing the tissue from the skull using the appropriate tools.

While the idea may cause some to squirm, Dowell was grateful for the opportunity to get real-life experience.

“I think it is extremely important for students to get hands-on experience so they can learn more about the field and the career in an up-close-and-personal setting,” she said. “Especially in science careers, there are a lot of things that can only be taught and practiced in labs and with experience.”

Removing the tissue also allowed for Anthony and Dowell to make observations about the underlying damage to the skull and evaluate the trauma, which becomes very important in the event a suspect is identified and the case goes to court.

“So [the trauma] noted in 1984, we can corroborate it with what we know now and just give a more clear picture of the level of injury,” Anthony explained, which could determine anything from the level and type of crime an individual is charged with to the length of his or her sentencing.

Anthony and Dowell’s observations of the skull upon removal of the soft tissue noted extensive trauma. So much so that large portions of it had to be superglued together in order for the reconstruction process to begin.

The first step in the reconstruction process was to photograph the skull and upload it to Photoshop. Then, Catyana used tissue depth-marker measurements to layer muscle and skin over the skull.

Tissue depth markers — which refer to the thickness of one’s skin at various points on the human face — vary depending on a person’s ancestry. So depending on the shape of the skull, which Anthony had evaluated and determined to be of European descent, Catyana layered more or less tissue.

The resulting image was the face of a woman in her mid-50s, a strong, thick nose dominating her square-ish face, offset by two downward-tilting eyes, deep smile lines and thin lips. 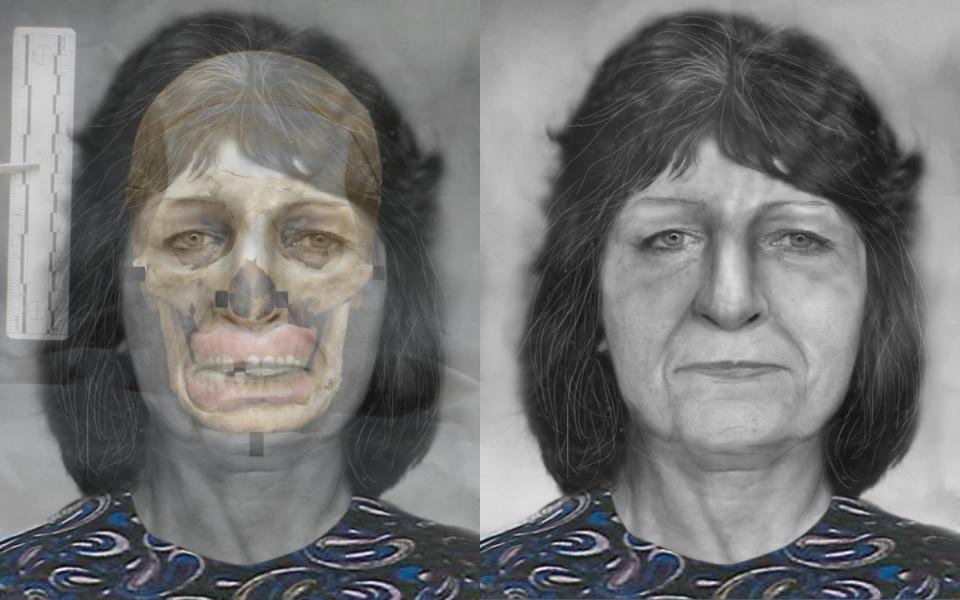 The completed facial reconstruction of the victim, done by forensic artist Catyana Falsetti. The hairstyle was based on hair found at the scene, and the shirt used in the image was found at the scene as well, Falsetti said.

All that was left to do was to upload it to the unidentified victim’s NamUs profile in hopes that someone would recognize her.

“That’s why the NamUs system is so important, because people can sit on their computer online now and at least search what has been uploaded,” said Catyana.

“That’s what we’re hoping to do here at ASU,” Anthony said, “is to start [creating facial reconstructions] within our own state, then work regionally. We’ve reached out and we’ve got some cooperation from medical examiners. And we’re going to start digitizing actual skulls so that we can then produce 3-D reconstructions based on the new data.”

Using a 3-D laser scanner would not only make the facial reconstruction process more accurate, but would allow for the extraction of even more data “so that we can continue to learn more about the human face and variation,” Anthony said, “which is what all this gets back to, as an anthropologist, is studying human variability. And this is just the application of it.”

Arizona State University is establishing a dual master’s degree program in which students can earn degrees in both journalism and law within two years.The Walter Cronkite School of Journalism and Mass Communication and the Sandra Day O’Connor College of Law are partnering to offer an accelerated path to a Master of Mass Communication (MMC) and a Master of Legal Studies (MLS).This joint course ...

Arizona State University is establishing a dual master’s degree program in which students can earn degrees in both journalism and law within two years.

This joint course of study, starting in fall 2016, is designed for incoming students interested in journalism careers reporting on legal issues, as well as for those in law who communicate with journalists or practice public relations.

“Journalism and law represent a very powerful combination,” said Christopher Callahan, dean of the Cronkite School. “This innovative dual-degree program, combining the assets of the Cronkite School and the O’Connor College, will give journalists, aspiring journalists and communications professionals a much deeper understanding of complex legal issues and help improve news coverage.”

Under the program, students take courses in U.S. law and legal analysis, professional legal writing, business organizations, other basic foundational courses and electives through the law school. The Master of Legal Studies degree provides a knowledge base and skill set that enable graduates to navigate and analyze general legal issues and apply them to their specific career interests.

At the Cronkite School, graduate students participate in advanced-level classes in media research methods, business and economic reporting and 21st-century media organization and entrepreneurship. Students also have the opportunity to cover legal issues for Cronkite News, the school’s award-winning student news operation that also serves as the news division of Eight, Arizona PBS.

“The dual MLS/MMC reinforces our commitment to teaching law to students who may not practice law, but who want to master legal principles in their chosen professions,” said Eric Menkhus, ASU Law associate dean of new education initiatives. “Students tell us they appreciate the comprehensiveness and flexibility of our programs. We are dedicated to providing a multi-disciplinary education so that students are able to thrive in a complex world in which legal knowledge is becoming increasingly valuable.”

In addition to the MLS/MMC dual degree, the Sandra Day O’Connor College of Law offers the MLS degree concurrently with a variety of graduate business degrees from the W. P. Carey School of Business, and a Master of Sustainable Solutions (MSUS) from the School of Sustainability. It also offers an MLS with focus areas within the law school including international law, health law, patent practice, among others. The law school offers other degrees including a Juris Doctor (JD), a Master of Sports Law & Business, and a Master of Laws (LLM).

The Walter Cronkite School of Journalism and Mass Communication at Arizona State University is widely recognized as one of the nation’s premier professional journalism programs. The school’s 1,700 students regularly lead the country in national journalism competitions. They are guided by faculty composed of award-winning professional journalists and world-class media scholars. Cronkite’s full-immersion professional programs give students opportunities to practice what they’ve learned in a real-world setting under the guidance of professionals.

The Sandra Day O’Connor College of Law at Arizona State University is one of the country’s preeminent law schools. Ranked No. 26 nationally by U.S. News & World Report, ASU Law is a leading provider of comprehensive and personalized legal education. The law school also ranks No. 11 in the nation for job placement. When ASU Law moves to the Arizona Center for Law and Society in downtown Phoenix in fall 2016, students will be steps away from the legal, political and economic heart of Arizona, in the nation’s sixth-largest city. For more information, visit law.asu.edu.