ASU scientists have explanation for fresh spots on ancient surface

When NASA's Dawn spacecraft approached the dwarf planet Ceres in March this year, scientists and the public alike were intrigued to see that Ceres has an dark, heavily cratered surface with dozens of bright white spots, large and small.

Even more puzzling, the bright spots lie in all kinds of terrain and appear variously as flat patches on the floors of craters and as an isolated peak, in at least one case.

According to Arizona State University's Marc Neveu and Steve Desch, what's emplacing the white material on the surface is what's happening far below. They recently published their model in Geophysical Research Letters to explain what's likely going on.

Ceres orbits the Sun in the main asteroid belt between Mars and Jupiter, at nearly three times Earth's distance from the Sun. Discovered in 1801 and the largest object in the main belt, Ceres is nearly 600 miles wide.

Even before Dawn, scientists knew something was up with Ceres. Earth-based observations and data from orbiting space telescopes had shown it has a surface with water-altered minerals and perhaps a tenuous cloud of water vapor around it.

Dawn's data added to the puzzle. The spots have a brightness that points to ice or salts, and as noted above, they appear as both flat and raised structures in many different types of landscape.

"That was a clue for us," said Neveu of ASU's School of Earth and Space Exploration, where he is a postdoctoral researcher working with Desch, a professor of astrophysics in the school.

"Previously published models suggested that Ceres had subsurface liquid water in the past and possibly until today. We also knew that cryovolcanism on Ceres was definitely an option because a present-day underground ocean would be refreezing and pressurizing liquid water down deep."

Cryovolcanism, or cold volcanism, is partly similar to the ordinary (hot) volcanism that occurs on Earth and other rocky planets. The difference is that in the cryo case, what erupts instead of molten rock is molten ice — liquid water or brine. Water ice would quickly sublimate into the vacuum of space at Ceres' surface, leaving behind salt deposits.

"When images released by the Dawn team revealed those bright spots, we immediately thought of a cryovolcanic origin," Neveu said. 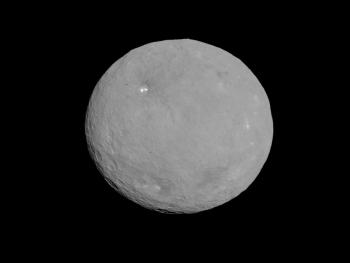 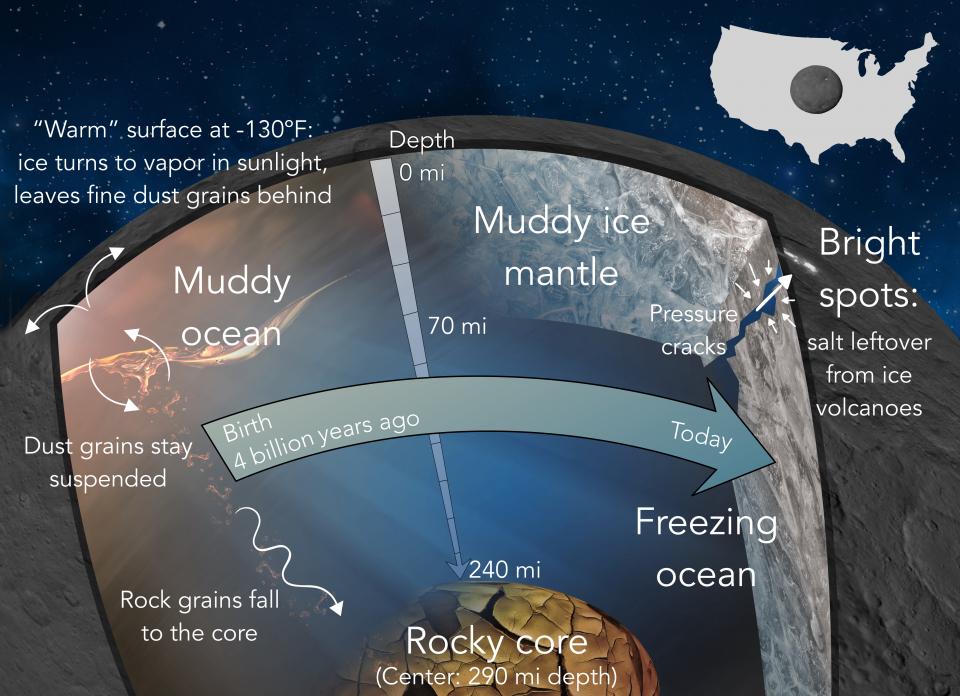 Four billion years ago, Ceres formed from a mixture of dust, rocky grains and ices. Today, it has a rocky core under a mantle of ice and rocky fragments. Between the two lie pockets of cold, briny liquid, the source of the white spots on the surface of Ceres. Artwork by Neveu and Desch

Neveu and Desch began with a reasonable assumption that Ceres formed from a mixture of ice and micro-particles of rock and dust. They hypothesized that the rocky particles released heat by radioactive decay. Impacts by meteorites were another likely factor. The heat would melt ice while allowing the denser rock fraction to settle toward the center of Ceres. It would also leave a surface coated with a residue of water-altered minerals.

Said Desch, "Our calculations of Ceres' evolution show that it is just warm enough deep inside Ceres for liquid water to exist." This water, he said, probably has other substances mixed in, making it a brine like seawater. "We calculate a temperature of 240 to 250 Kelvins, or about –27 degrees to –9 degrees Fahrenheit, just warm enough for chloride brines to persist and to be freezing today."

As the brine freezes, Neveu and Desch explained, it will expand (as ice does) and thus raise the pressure on any liquid or briny reservoirs inside Ceres.

"This should drive these fluids up to the surface, where they will erupt as cryovolcanic outflows," according to Neveu.

If cryovolcanism at various places across Ceres’ surface is driven by liquid freezing at depth, this activity may have increased as Ceres has cooled down, making it more likely today.

Cryovolcanism also has a side effect, said Desch: "The eruptions and outflows may contribute to the water vapor being produced at Ceres."

Added Neveu: “Cryovolcanism coming from deep inside Ceres is breathing new activity onto its ancient surface.”

The School of Earth and Space Exploration is a unit in ASU's College of Liberal Arts and Sciences.

Colorful images of abstract and modern art by two Arizona artists will be featured in an exhibition at ASU Gammage Dec. 13-Feb. 9.Melissa Schleuger’s dynamic art incorporates geometric shapes into an organic backdrop, creating work that blends the unexpected with sophistication and beauty. Specializing in abstract expressionism, she begins each painting without preconceived influence and follows...

Colorful images of abstract and modern art by two Arizona artists will be featured in an exhibition at ASU Gammage Dec. 13-Feb. 9.

Melissa Schleuger’s dynamic art incorporates geometric shapes into an organic backdrop, creating work that blends the unexpected with sophistication and beauty. Specializing in abstract expressionism, she begins each painting without preconceived influence and follows the lead of brush strokes and paint. 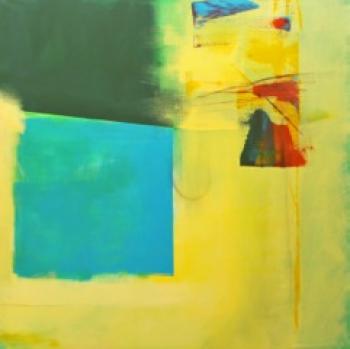 "Plus One" by Arizona artist Melissa Schleuger Download Full Image

Schleuger recently was named one of the finest emerging artists in the Valley by the 2015 Chancellor Awards of Maricopa Community Colleges. A student at Scottsdale Community College, she has shown her work at local venues including the Herberger Theater and Art Intersection.

Geoff Gildner’s work reflects his experience in the architectural field, using color, form and the shapes of the natural environment as a foundation. Many of the vibrant pieces on exhibit at Gammage are created using found objects such as wood, glass, sheet metal and old canvas paintings.

A 1994 history graduate from ASU with an emphasis on architecture, Gilner is a self-trained artist who is influenced by the works of Mondrian, Rietveld, Kandinsky, Pollack and de Kooning, as well as the organic architecture of Frank Lloyd Wright. His work can be found in private art collections both in the United States and abroad.

"Witnesses to the Actions of One" by Arizona artist Geoff Gildner

Exhibit hours at ASU Gammage are 1 to 4 p.m. Mondays, or by appointment. Due to rehearsals, event set-up, performances, special events and holidays, it is advisable to call (480) 965-6912 or (480) 965-0458 to ensure viewing hours, since they are subject to cancellation without notice.

The street address is 1200 S. Forest Ave., Tempe. Parking is available at meters around the perimeter of ASU Gammage. Entrance is through east lobby doors at the box office.