Young students jog, jump and dance to retain what they learn

It might resemble the hokey pokey, but these students doing arm circles, jumping jacks and dance steps are actually learning about nutrition and physics using whole-body movements shown to help knowledge retention. Such “mixed-reality” games that merge the digital with the physical are being developed and tested by Mina Johnson-Glenberg in Arizona State University’s Embodied Games for Learning Lab.

“ASU is already at the forefront of games and learning,” said Johnson-Glenberg, associate research professor in ASU’s Learning Sciences Institute, T. Denny Sanford School of Social and Family Dynamics and Department of Psychology. “But our lab is really the only one in the country pushing hard on the principles behind this kind of embodied learning and also creating games for K-12 classrooms.” 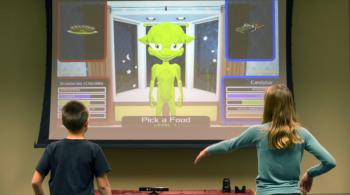 Johnson-Glenberg also is creating games for ASU faculty to use with their college-aged students, either in class or as homework modules. These new role-playing games focus on research methods and how to retain first-generation students. The games will be released to faculty online in spring 2014. For more about the lab, visit http://egl.lsi.asu.edu/.

Trained as a cognitive psychologist, Johnson-Glenberg began her career working in academia on one of the first computer tutoring programs to remediate students with dyslexia. She then turned entrepreneur by starting a small educational technology company funded by several small business grants from the National Institutes of Health and U.S. Department of Education. Six years ago, Johnson-Glenberg moved to ASU where she could focus on creating serious games for learning.

“We have found that students retain knowledge better when they learn it with their bodies,” she explained. “And these motion-capture gesture-rich games have the added benefit of getting students out of their seats and moving.”

Johnson-Glenberg noted that in 2010, more than one-third of U.S. adolescents were considered overweight or obese. She decided to create the “Alien Health Game” to address the wellness of middle school student players on two fronts. First, it is an “exergame” that requires active physical engagement in order to play, and second, the game’s content promotes healthful eating choices. ASU’s Obesity Solutions Initiative awarded the game a seed grant in spring 2013.

To play the Alien Health Game, students must work in pairs while the rest of the class is encouraged to throw out suggestions. “There’s a lot of discourse going on,” Johnson-Glenberg explained.

Before game play starts, the players are instructed, “You have just woken up to find an alien under your bed. It is hungry and it is your job to figure out what makes it healthy.” As students make rapid food choices, they deduce through trial and error which foods make the alien healthier and which foods make it more tired due to poor nutrition. Students not only discover how the five main nutrients interact to create a balanced meal, but they also gain experience with the new U.S. Department of Agriculture MyPlate nutrition guide that recently replaced the familiar Food Pyramid.

With each food choice, players are asked to perform brief cardiovascular activities – jogging, arm circles, dance moves and jumping jacks – that elevate their heart rate and help the alien metabolize food. The game gives them practice in selecting nutritional foods in real-world situations, such as going through a school cafeteria line or grabbing snacks at convenience stores.

Johnson-Glenberg also has created a series of simple machine games, “Gears and Levers,” with the same goal of teaching STEM to middle school students in ways that are accessible and embodied. The series was funded by the Bill & Melinda Gates Foundation and Next Generation Learning Challenges. These games also get students physically involved in the learning process, in this case discovering physics principles.

“I feel that physics in particular lends itself to embodied learning games,” she said. “It’s all about forces, that is pushes and pulls, and we can easily track those movements using motion tracking sensors. But we also like to tackle instructing abstract concepts using physical gestures, such as electric fields, which we’re currently studying with a grant from the National Science Foundation.”

The underlying philosophy of embodied learning games asks, “How do we use gesture to help people retain what they learn?” Johnson-Glenberg insisted that a rigorous program of research is essential for assessing the new learning approach. She is lead author on three recently published research papers on the subject.

“Our controlled studies are showing that whenever students use gestures to learn, they actually are remembering information longer,” she said. “Often, our immediate post-tests show results with no significant differences associated with learning from embodied games. However, we do see significant differences when students return for follow-up testing a week later. At that point, we are finding that those students who learned with gestures are retaining the information longer.”

Johnson-Glenberg explained that the research supports gesture-based learning, perhaps because after sleep and the passage of time, students can consolidate their memories. They hypothesize that using motor memory provides an extra memory trace that helps students recall the information later – either for an exam or for use in the real world.

To date, the learning scientist has developed eight embodied games for learning – enough to give teachers multiple days of interesting, innovative content to supplement their classroom lessons. She noted that getting these mixed-reality, motion-capture games out of the lab and into schools is becoming more feasible as the costs of the technology continue to fall.

As embodied learning researchers continue to develop new mixed-reality games, she added, it is important that the games not only be grounded in learning theory, but also remain enticing to students: “We need to keep these games engaging, playful and interactive in ways that typical, more passive learning technologies are not.”

ASU engineers to help develop next generation of power electronics

ASU engineers to help develop next generation of power electronics

Arizona State University electrical engineers Srabanti Chowdhury and Raja Ayyanar will lead research for the university’s role in a new national consortium formed to develop the next generation of power electronics.

Funded by the U.S. Department of Energy, the work of the Next Generation Power Electronics Innovation Institute is expected to boost the nation’s manufacturing industry and create new jobs.

“We are very excited to be part of the national network for manufacturing innovation, focused on the development of next-generation power electronics,” said Sethuraman “Panch” Panchanathan, senior vice president for Knowledge Enterprise Development at ASU. “This institute is an excellent example of how universities can work with the government and the private sector to respond to the need for rapid economic development expansion.

The energy department is awarding $70 million over five years to support the institute, and that funding will be matched by at least $70 million in nonfederal commitments by a team of businesses, universities and the state of North Carolina.

ASU’s research for the consortium will be supported by a five-year, multimillion-dollar program.

The Obama administration plans to establish three manufacturing institutes as part of an effort to secure U.S. leadership worldwide. This consortium is the first of the three institutes.

Chowdhury is an assistant professor and Ayyanar is an associate professor in the School of Electrical, Computer and Energy Engineering, one of ASU’s Ira A. Fulton Schools of Engineering. Chowdhury is the principal investigator for ASU in the national consortium.

“We are proud to be part of this major national initiative that recognizes the accomplishments and promise of our faculty and students,” says Stephen M. Phillips, director of the School of Electrical, Computer and Energy Engineering.

Chowdhury will focus on development of gallium nitride-based power electronic devices for energy-efficient power conversion. “The main goal is to develop a technology that can be readily adopted by industries for high-volume manufacturing,” she says.

Their research will be essential to the consortium’s primary engineering mission to provide technology for more efficient and reliable power conversion – the process of converting one form of power to another.

Power conversion is necessary for the functioning of many common electronic devices, from charging laptop computers, cell phones and electric vehicles to powering the electrical systems in homes. It is also needed to provide an interface between sources of renewable energy and the existing national power grid.

Most of today’s power conversion is accomplished with a silicon-based technology that has reached the limits of its capability to convert power efficiently, Chowdhury explains.

The inefficiency of the current power conversion process results in enormous amounts of wasted power, she says. Chowdhury, Ayyanar and their consortium partners will use silicon carbide and gallium nitride, the two leading wide-bandgap semiconductors, to significantly out-perform the current technology in efficiency and minimize power waste.

Such advances would not only make power conversion more efficient, but enable motors, consumer electronics and devices that are components of electrical power grids to be made smaller and operate faster.

ASU’s involvement with the new institute will give engineering faculty members an opportunity to give students training in power electronics based on the research consortium’s progress, Chowdhury says.

Member universities, in addition to ASU and North Carolina State, are Florida State University, the University of California at Santa Barbara and Virginia Polytechnic Institute.

The National Renewable Energy Laboratory and the U.S. Naval Research Laboratory are the other members.