What past climate change can tell us about today

Did climate change shape human evolution? That is the question marine geologist and geochemist Peter deMenocal is trying to answer. He will be on the ASU Tempe campus April 29, as a participant in the Institute of Human Origins’ 30th Anniversary Lecture Series. The lecture will take place at 5:30 p.m. in Murdock Hall, room 101. The event is free and open to the public.

As a professor and vice chair of the Department of Earth and Environmental Sciences at Columbia University, deMenocal conducts research through Columbia’s Lamont-Doherty Earth Observatory, where Earth science is studied on a global scale.

deMenocal employs deep-sea sediments as “archives” of past climate changes to understand the paleoclimatic context of early human evolution. He uses geochemical analyses of marine sediments to understand how and why past climates have changed and to place contemporary climate change trends within the context of the prehistoric past. Ocean sediments accumulate slowly but continuously and provide faithful records of past changes in Earth climate and ocean circulation over a wide range of timescales, from centuries to millions of years.

In the Feb. 4, 2011, issue of Science, deMenocal posits that large-scale shifts in climate changed ecological structures and resource availability. In particular, notable hominin events—extinctions, formations of new species, and other evolutionary events—appear to be associated with changes in African climate in the past 5 millions years, including the extinction of Australopithecus afarensis (popularly know as “Lucy,” discovered by ASU paleoanthropologist Donald Johanson) around 2.9 million years ago, the emergence of robust australopiths with large jaws and grinding teeth near 2.7 million years ago, and the emergence of the larger-brained Homo lineage sometime after 2.6 million years ago.

Peter deMenocal is one of seven lecturers planned to bring renowned scientists and experts in human origins to the ASU campus to celebrate the Institute of Human Origins’ anniversary theme, “Becoming Human: 30 Years of Research and Discovery.”

“The Institute of Human Origins’ research spans the breadth of human origins science, from crucial discoveries painstakingly extracted from the earth’s sedimentary record to sophisticated, cutting-edge analysis of the evidence and its contexts,” notes institute director and School of Human Evolution and Social Change professor Bill Kimbel.  “Our 30th anniversary lecture series is meant to illuminate the fundamentally transdisciplinary arc of our science and, at the same time, point the way forward on the key questions concerning human origins.”

A full year of anniversary events has been planned, including the lecture series; a fall 2011 exhibition in the ASU Museum of Anthropology; an essay competition – “Letters to Lucy” – for elementary, middle, and high school students; and a final symposium and gala in April 2012.

For more information about this lecture or the 30th Anniversary events, visit http://iho.asu.edu/30th.

This lecture is cosponsored by the School of Human Evolution and Social Change Late Lessons from Early History Lecture Series and the Institute of Human Origins.

Naval honor and tradition was unfurled at Arizona State University April 28 during a plankowner celebration for its first Naval ROTC class.

Naval honor and tradition was unfurled at Arizona State University April 28 during a plankowner celebration for its first Naval ROTC class. Side boys stood at attention and saluted while the Boatswain mate piped dignitaries, including Rear Admiral James A. Symonds, Retired, and Gilbert Mayor John Lewis, as they walked along a red carpet and were greeted by the unit’s commanding officer, Capt. Steven Borden.


“This has truly been an incredible first year,” Borden told the midshipmen, faculty members, families and community guests who gathered for an end-of-the-year celebration to honor those who have served in bringing the Naval ROTC unit alive and into active service at ASU. 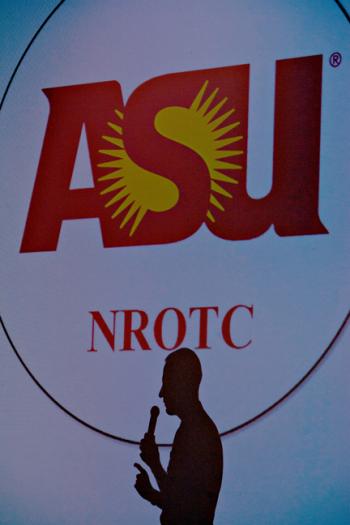 
He spoke of the term “plankowner,” and recalled “back in the day when our ships were made of wood and sailors were made of iron,” that the name was applied to crew members who were around when the ship was being built and commissioned. Plankowner (or plank owner) is not an official Navy term, though plankowners proudly wear the moniker on baseball caps and T-shirts.


Much has changed in the Navy since those early days, Borden said, “but one thing has not changed. A command is made up of its people. It is the spirit and the character and personality of the individuals in the command that form the command.


“The men and women who are plankowners of this command are in a very real way creating the culture, climate and tradition of this unit,” said Borden, who has served 27 years in the Navy, in helicopter mine countermeasures squadrons, as a flight instructor, and as commanding officer of an aviation squadron.


Success of an NROTC unit, said Borden, is measured not only in numbers but in individual progress.


“What makes me the most proud with respect to these young men and women is the way they have advanced in leadership skills, their military professionalism, the unit camaraderie that has developed inside the Sea Devil Battalion, as we call ourselves, and the esprit de corps.”


“The addition of the Naval ROTC unit is a spectacular step forward for ASU and the College of Liberal Arts and Sciences,” said Quentin Wheeler, university vice president and dean of the college. “We are honored to play a small role in training, preparing and inspiring the next leaders who will come out of this unit.”


“It is a proud time for us to see the first class finish their first year,” said Linda Lederman, dean of social sciences in the College of Liberal Arts and Sciences. The midshipmen who participate in the Naval ROTC take naval science classes offered through the college.


“What we have in common,” said Lederman, “is service. Every kind of work that each of us does is service.”


That theme of service was repeated in remarks made by John Sentz, a retired captain from the Navy Reserve and member of the Gilbert Town Council.


“I wanted to be in a Naval ROTC unit when I was a freshman at ASU,” he told the audience, lamenting the absence of a unit at that time. Sentz, who was a member of the team that put together the proposal to the Navy to create an ROTC unit at ASU, stressed that “while the unit is located in Tempe, this is a community asset, and we’re proud to have you here.”


The full-time ASU students in the NROTC unit, known as midshipmen, were introduced and stood in their new service khaki uniforms. Of the 62 midshipmen, 47 are freshmen, 13 are sophomores and two are juniors. There are 50 males and 12 females; 38 are enrolled in the Navy option, 22 in the Marine option and two in the nursing option. Upon graduation the midshipmen will be commissioned either as ensigns in the U.S. Navy or a second lieutenants in the Marine Corps.


Midshipman Battalion Commander Jake Tyra, a sophomore majoring in kinesiology, thanked those in attendance for support over the past year. He spoke of the bond that has grown among the midshipmen by enduring physical training and attending naval science classes together.


“I’ve noticed a unity in the battalion,” he said.


One of the defining moments, he said, was wearing their new uniforms on campus.