US Secretary of Defense visits ASU before historic trip to Asia

Half of all humanity and a majority of the word’s middle class will reside in the Asia Pacific in the next few decades, which is why the United States is bolstering its efforts to protect the region with as much military might as it can muster.

“A growing Asia Pacific is an enormous opportunity for you and your country whether you’re a doctor, an entrepreneur, an engineer, an artist or a software designer,” said U.S. Secretary of Defense Ashton Carter. “The arithmetic is straightforward: 95 percent of the world’s customers for the cures you discover, the software you develop, the articles you write live beyond our borders.” 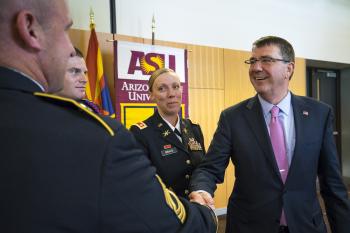 Carter addressed about 400 Arizona State University students, staff, faculty and local military personnel at the Memorial Union on the Tempe campus on April 6. ASU’s McCain Institute hosted Carter before his first official trip to Asia as head of the Department of Defense and asked him to speak on the links between economic and national security in the Asia Pacific.

“It’s appropriate that I talk about this region at the McCain Institute because John McCain is an American hero, a statesman and a friend of mine,” Carter said. “He’s a staunch supporter when it comes to the welfare of the troops.”

Carter said thanks to McCain, the U.S. and Vietnam have overcome years of mistrust and have forged a military relationship of shared defense capabilities, something that was not possible a decade ago. Carter pointed to Vietnam as an example of the United States' relationship with the Asia Pacific on the eve of what Carter terms a “rebalance” to ensure we do not lose ground in this dynamic region.

“Over the past 70 years, America has not only helped heal the wounds of World War II, we have helped create the stability that has allowed people, economies and countries throughout the Asia Pacific to make incredible progress,” Carter said. “The rebalance, in a nutshell, is about sustaining this progress and helping the region to continue to fulfill its promise.”

A big portion of the rebalance includes a big show of military force and construction of military bases and installations in Japan, Korea and Guam. To accomplish this mission, Carter said the U.S. will deploy several weapons, technologies and a realignment of troops to the region. They include a long-range stealth bomber; a new long-range anti-cruise missile; F-22, P-8, B-2 and B-52 aircrafts; the creation of a “Star Wars”-style railgun, which uses electromagnetic forces rather than explosives to fire rounds; and a couple of Aegis Ballistic Missile Defense ships.

ASU freshman Ray Riebli, who is planning a career in the Marines, said he found Carter’s remarks about the Asia Pacific exciting and well-executed.

“It’s an exciting time for the military in the Asian Pacific, and everything I have heard from Secretary Carter sounds well-planned and thought-out,” Riebli said. “It’s the future and sounds like it’ll be a good opportunity for our country’s economic growth.”

ASU serves more than 4,500 military, veteran and dependent population students and is committed to their success in education. The university has been named a “Military Friendly School” by G.I. Jobs magazine six years in a row.

An earlier version of this story said about 250 people attended the event.

ASU's Center for Science and the Imagination has designed a number of activity stations for the Phoenix Art Museum's Leonardo da Vinci's Codex Leicester that encourage visitors to engage in critical and creative thinking and making.

Arizona State University’s Center for Science and the Imagination has designed a number of activity stations that are integrated into Phoenix Art Museum's "Leonardo da Vinci's Codex Leicester and the Power of Observation" exhibit.

The stations encourage visitors to engage in critical and creative thinking and making, and the activities are designed to provide hands-on experiences for visitors to explore a key theme of the exhibit: thinking on paper. The exhibit is on view at the museum through April 12. 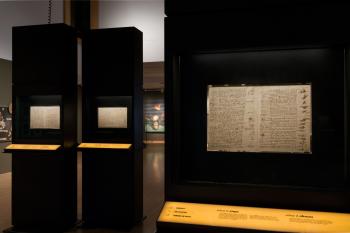 “This collaboration with CSI (Center for Science and the Imagination) provides a nice opportunity for visitors to practice what they learn in the exhibition about the intersection of curiosity, observation and thinking through ideas. Including interactive elements like these in the gallery context can reinforce concepts in the moment,” said Kathryn Blake, The Gerry Grout Education director at the Phoenix Art Museum.

• Codex Word Play provides an opportunity to explore the Codex Leicester and Leonardo’s ideas about water through a mad libs-style exercise, and presents an analog complement to a digital interactive for translating the Codex.

• Codex Middle Word challenges visitors to synthesize ideas by imagining words that illuminate connections between them. This activity is an attempt to give visitors a sense of Leonardo's unique, non-linear style of reasoning.

• Create Your Own Codex prompts visitors to create a codex featuring their own observations about the natural world around them. This station encourages visitors to see the world through Leonardo’s endlessly curious eyes.

The activities were designed by Max Evjen, a specialist in the field of informal science education, in collaboration with Blake and Nina Miller, design strategist at the Center for Science and the Imagination.

“We designed these activity stations to provide fun, reflective, kinesthetic learning experiences that encourage visitors to explore the modes of thought that Leonardo employed to create the Codex Leicester,” said Evjen. “We think everyone will enjoy these opportunities to think like Leonardo.”

“In designing these activities, I wanted to build in elements of physical interaction with the ideas. Leonardo was a tinkerer and maker, as well as a philosopher and scientist,” said Miller. “My goal in the design was to help people to think in a non-linear way, inspired by Leonardo’s unique cognitive style.”

Evjen and researchers from ASU's Center for Science and the Imaginiation are working together to conduct research on how the activities affect people's experiences in the exhibition, including how they learn about art and science and understand Leonardo’s unique approach to scientific curiosity, observation and cognition. The research will also evaluate what elements of the exhibition visitors find most engaging, and analyze people's creative work at the activity stations to explore new ideas and connections that the exhibition helped to bring about.

Admission to the exhibition is included in general admission to Phoenix Art Museum. For more information visit phxart.org/exhibition/codexleicester.