Who were the people being sacrificed in Mexico more than a thousand years ago? And why were they chosen for ritual violence?

Sofía Pacheco-Forés, a onetime graduate student with Arizona State University’s School of Human Evolution and Social Change, wanted answers to these questions, so she turned to archaeological chemistry. The findings were recently published in the Journal of Anthropological Archaeology. 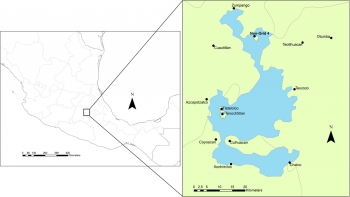 Figure from the research showing the location of Non-Grid 4 site on the northern end of the now-extinct lake, once located in central Mexico. Reprinted with permission from Pacheco-Forés et al., Journal of Anthropological Archaeology, doi.org/10.1016/j.jaa.2020.101263, (2021). The article is published open access via a CC-BY- NC- ND license.
Download Full Image

The research was conducted at a site called Non-Grid 4, which is near present-day Mexico City. Remains from more than 180 sacrificed individuals have been discovered at the site. Non-Grid 4 was once surrounded by water from a now-extinct lake, and researchers suggest the sacrifices made there were to deities of rain, water and earth.

Pacheco-Forés analyzed the chemical composition of bones and teeth to determine where the individuals spent most of their lives.

Pacheco-Forés is continuing her research about the social identities of past peoples as an assistant professor of anthropology at another prestigious university. She graduated from ASU with a PhD in anthropology in 2020.

The paper, “Migration, violence, and the “other”: A biogeochemical approach to identity-based violence in the Epiclassic Basin of Mexico” published in the Journal of Anthropological Archaeology. Co-authors of the paper include School of Human Evolution and Social Change Associate Professor Christopher Morehart, Regents Professor Jane Buikstra, Professor Kelly Knudson, and School of Earth and Space Exploration Professor Gwyneth Gordon.