The article, titled "Google’s new ‘Time Crystals’ could be a breakthrough for long-awaited quantum computers," discusses how Google, along with Stanford and Princeton universities, are working towards creating "time crystals" using the company’s Sycamore quantum computer. The original concept for time crystals was created by Frank Wilczek, professor at the Department of Physics and Nobel Prize winner. 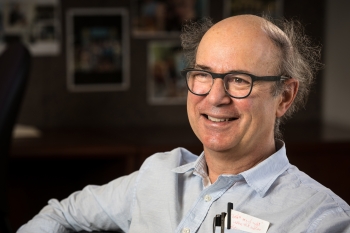 “In the summer of 2011, I was getting ready to teach a course on the use of symmetry in physics. I wanted to talk about crystals, which of course are an outstanding example of that,” Wilczek said. “I thought about what the possible forms of crystals in more than three dimensions could be. Physicists and mathematicians are very accustomed to treating time as a dimension, a natural application of these things would be to describe patterns of how things might depend in time.”

After contemplating the idea of time crystals, Wilczek discussed it with Al Shapere, professor of physics and astronomy at the University of Kentucky.

Wilczek wrestled with the idea over the next year or so, but hadn’t felt fully comfortable with pursuing the idea yet. For Wilczek’s 60th birthday in summer 2012, his family planned a two-week long walk across England to celebrate.

“During the walk I had lots of time to think without distractions, and I decided it would be a good opportunity to think through the issues,” Wilczek said. “One evening, my wife, Betsy Devine, asked me to explain what I was thinking about, and I gave her some gobbledygook before coming out with, ‘They’re like crystals, but in time.’ She said, ‘Then you should call them time crystals!’ By the end of the walk, I felt sufficiently confident about the ideas that I could write something coherent, and that’s what I did.”

Since then, Wilczek wrote a solo paper on this concept, as well as a paper with Shapere.

“I am still thinking about time crystals. With some powerhouse collaborators, we’ve nearly completed a survey of the subject, emphasizing the most recent developments. It’s been inspiring to see how far things have come. I will also be writing a more popular article for Inference, where I’ll allow myself to speculate a bit,” Wilczek said. “I hope and expect that time crystals will find practical use in sensitive measurement devices.”