On their own 2 feet: Fossil reveals early human bipedalism


A fossilized foot bone recovered from Hadar, Ethiopia, shows that by 3.2 million years ago human ancestors walked bipedally with a modern human-like foot, according to a report that appears in the Feb. 11 edition of the journal Science. 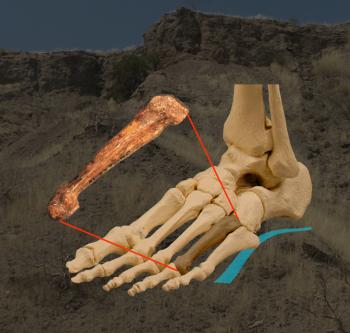 
The fossil, a fourth metatarsal, or midfoot bone, indicates that a permanently arched foot was present in the species Australopithecus afarensis. The report's authors include Carol Ward of the University of Missouri and William Kimbel and Donald Johanson of ASU’s Institute of Human Origins.


The research helps resolve a long-standing debate between paleoanthropologists who think A. afarensis walked essentially as modern humans do and those who think this species practiced a form of locomotion intermediate between the quadrupedal tree-climbing of chimpanzees and human terrestrial bipedalism. The question of whether A. afarensis had fully developed pedal, or foot, arches has been part of this debate.


The fourth metatarsal described in the Science report provides strong evidence for the arches and, the authors argue, support a modern-human style of locomotion for this species. The specimen was recovered from the Hadar locality 333, popularly known as the “First Family Site,” the richest source of A. afarensis fossils in eastern Africa, with more than 250 specimens, representing at least 17 individuals, so far known.


“This fourth metatarsal is the only one known of A. afarensis and is a key piece of evidence for the early evolution of the uniquely human way of walking," Kimbel said. “The ongoing work at Hadar is producing rare parts of the skeleton that are absolutely critical for understanding how our species evolved.”


Humans, uniquely among primates, have two arches in their feet, longitudinal and transverse, which are composed of the midfoot bones and supported by muscles in the sole of the foot. During bipedal locomotion, these arches perform two critical functions: leverage when the foot pushes off the ground and shock absorption when the sole of the foot meets the ground at the completion of the stride. Ape feet lack permanent arches, are more flexible than human feet and have a highly mobile large toe, important attributes for climbing and grasping in the trees. None of these apelike features are present in the foot of A. afarensis.


“Understanding that the foot arches appeared very early in our evolution shows that the unique structure of our feet is fundamental to human locomotion,” Ward said. “If we can understand what we were designed to do and how natural selection shaped the human skeleton, we can gain insight into how our skeletons work today. Arches in our feet were just as important for our ancestors as they are for us.”


This species, whose best-known specimen is “Lucy,” lived in eastern Africa 3.0 million to 3.8 million years ago. Prior to A. afarensis, the species A. anamensis was present in Kenya and Ethiopia from 4.2 million to 4 million years ago, but its skeleton is not well known. At 4.4 million years ago, Ethiopia’s Ardipithecus ramidus is the earliest human ancestor well represented by skeletal remains. Although Ardipithecus appears to have been a part-time terrestrial biped, its foot retains many features of tree-dwelling primates, including a divergent, mobile first toe. The foot of A. afarensis, as with other parts of its skeleton, is much more like that of living humans, implying that by the time of Lucy, our ancestors no longer depended on the trees for refuge or resources.


The Hadar project is the longest running paleoanthropology field program in the Ethiopian rift valley, now spanning more than 38 years. Since 1973, the fieldwork at Hadar has produced more than 370 fossil specimens of Australopithecus afarensis between 3.4 and 3.0 million years ago – one of the largest collections of a single fossil hominin species in Africa – as well as one of the earliest known fossils of Homo and abundant Oldowan stone tools (ca. 2.3 million).


Through ASU’s Institute of Human Origins, the Hadar project plays an important role in training Ethiopian scholars by offering graduate degree and postdoctoral opportunities in the U.S. Promotion of local awareness of the global scientific importance and Ethiopian cultural heritage value of the Hadar site is also a project priority. Additionally, the fundraising phase of a planned “Hadar Interpretive Center” at Eloaha town, 30 kilometers from the site, was successfully completed in January 2011.


The field and laboratory research on which the Science paper was based was supported by grants from the National Science Foundation and the National Geographic Society, and by funding from the Institute of Human Origins at Arizona State University. Permissions, support and encouragement were provided through the Ethiopian Authority for Research and Conservation of Cultural Heritage and the National Museum of Ethiopia. In addition to Kimbel and Johanson, the Hadar Research Project and the Hadar Paleoanthropology Field School include ASU Institute of Human Origins faculty Kaye Reed and Chris Campisano.


The Institute">http://iho.asu.edu">Institute of Human Origins (IHO) at Arizona State University is a research center in the School of Human Evolution and Social Change, College of Liberal Arts and Sciences. IHO pursues a transdisciplinary strategy for field and analytical paleoanthropological research central to its 30-year-old founding mission – integrating social, earth and life science approaches to the most important questions concerning the course, timing and causes of human evolutionary change over deep time. IHO links to its research activities innovative public outreach programs that create timely, accurate information for education and lay communities.

The number of foreclosures in the Phoenix area jumped back up in January, putting a damper on hopes for a quick 2011 recovery in the hard-hit housing market, according to a new business report.

The number of foreclosures in the Phoenix area jumped back up in January, putting a damper on hopes for a quick 2011 recovery in the hard-hit housing market. A new report from the W. P. Carey School of Business at Arizona State University reveals details.

While foreclosures represented about 30 percent of the transactions in the single-family-home resale market in the last few months of 2010, the rate bounced back up to 43 percent in the first month of 2011.

“The main question for the coming months is whether the January surge in foreclosure activity is a temporary response in unclogging the pipeline after foreclosure moratoriums ended or a continuation of a market being dominated by foreclosures,” says associate professor of Real Estate Jay Butler, who wrote the report.

More than 3,600 single-family homes were foreclosed in January. That’s way up from less than 2,500 in December.

Right now, single-family home prices are staying relatively low in the Phoenix area. The median price for home resales (not including new foreclosures) was $125,000 in January, the same as December. This was a big drop from last January’s median of $136,500.

“For the last year, about 40 percent of the traditional sales were foreclosed homes sold again with a median price markdown of 14 percent from the foreclosed price,” explains Butler.