ASU has announced that Tesco is joining The Sustainability Consortium, an independent group of global businesses, academics, governments and non-governmental organizations that work collaboratively to drive innovation in consumer product sustainability.

The Tesco-funded Sustainable Consumption Institute (SCI) at The University of Manchester also will become an academic member of the Consortium. Tesco joins 16 other European members that provide The Sustainability Consortium a strong foothold in the region.

Joining the consortium is a further boost to Tesco’s work on sustainability and comes after its commendation as the top green UK retailer by the internationally recognized Carbon Disclosure Project. By focusing on environmental and social sustainability in the supply chain, the consortium’s collaboration between Tesco and other global businesses will drive sustainable production and consumption in the consumer goods market. This partnership builds on the consortium’s recent opening of a European branch at Wageningen University & Research Centre in The Netherlands.

Tesco estimates that it saved £200 million in global energy costs last year by going green and aims to be a zero-carbon business by 2050. In addition to opening the world’s first zero-carbon supermarket2, Tesco has carbon footprinted over 1,100 products since 2008, currently the largest product footprinting project undertaken by any retailer.

“Successful collaboration between leading global businesses – whether they are retailers, wholesalers, suppliers or producers – will go a long way in helping companies reduce their carbon emissions and thereby reduce the carbon footprints of the products we sell," said Helen Fleming, Group Climate Change director. "This will help consumers make more sustainable choices about the products they buy. The Sustainability Consortium has a great opportunity to show the world that living greener lives can be attractive and affordable and that small changes really do make a big difference. We’re proud to be a member of the consortium and look forward to collaborating with the many other businesses and organizations.”

Professor Alistair Ulph, executive director of The University of Manchester’s Sustainable Consumption Institute said, “The SCI is looking forward to collaborating with the Sustainability Consortium on research projects where there are shared interests, such as developing product category sustainability profiles and a deeper understanding of how best to influence consumers to adopt more sustainable lifestyles. We are pleased to be the first UK university involved with the consortium and look forward to collaborative research with their business and academic partners.”

"The true adventures of Cheery, a Chiricahua Leopard Frog" offers kids (and their parents) a pollywog hero and a forum for global environmental solution-building.

Move over Kermit, there’s a native frog rising in the West.

With a big green puppet in hand, Elizabeth Davidson, a microbiologist at ASU, has young children imagining the life cycles and life challenges of a threatened frog species in Arizona – and cheering for the underfrog. 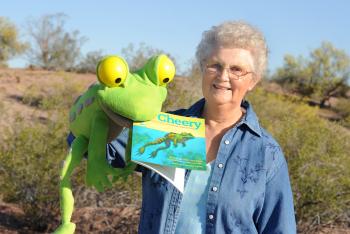 “Cheery: The true adventures of a Chiricahua Leopard Frog,” is a picture book written by Davidson and brought to life by graphic artist Michael Hagelberg. Published by Five Star Publications, Inc., the book was developed with support from the Heritage Fund, funded by Arizona Game and Fish Department, and was officially designated an Arizona Centennial Legacy Project by the Arizona Historical Commission.

In the tale, a Chiricahua (Cheer-a-cow-ah) pollywog, Cheery, grows up with a very uncertain future. “Round and fat and pale green with brown spots” makes tadpoles good eating for voracious introduced, non-native species in waterways and ponds. Crayfish, bait fish and bullfrogs, used as bait and discarded by fishermen, native snakes and birds are all predators of native pollywogs and young frogs.

Who knew that growing to an adult frog is so full of challenges in the Southwest?

If that weren’t enough, amphibians are threatened by microscopic predators. In this case, an infectious disease is decimating frog populations in Arizona and worldwide. More than one-third of all amphibian species (frogs, toads and salamanders) are now extinct or threatened with extinction. This is the real-life science that Davidson studies and teaches about in ASU School of Life Sciences, in addition to her work with infectious insect diseases, and mentoring of high school and undergraduate life science students.

“Children need a way to relate to things that are important in the environment, because they are important in ways that no one could even guess,” says Davidson. “This book helps them learn a bit about biology, about predator-prey relationships, about lifecycles, about ecology and about overcoming obstacles.”

The book also offers teachers tools and scientific information interesting for older children. “Not to mention, frogs are just appealing. Look at Kermit!” she adds.

In Arizona, more than 80 percent of the sites where leopard frogs were once found are now empty of them. Organizations like the Sonoran Desert Museum in Tucson, Arizona Game and Fish Department, the Phoenix Zoo and U.S. Fish and Wildlife Department have worked together to develop conservation and captive breeding programs.

ASU alumnus Mike Sredl, now a biologist with Arizona Game and Fish, is very active in a breeding and reintroduction program like the one described by Cheery. The Phoenix Zoo supports tanks and a program to breed disease-free leopard frogs. Ponds are then renovated, pools deepened, and non-native predators are removed, before tadpoles and froglets (young frogs) are reintroduced to their former homes in the wild. The breeding facilities are typically closed to the public, but Davidson was invited to visit and some of the book’s illustrations are based on photographs that Davidson took on her visits.

How does the future look for Cheery’s relatives in the wild? Davidson’s book readings with her frog puppet, most recently with the children in ASU’s Mary Lou Fulton Teacher’s College Preschool and Arizona Game and Fish Department’s Open House, have created a great deal of enthusiasm for the heroic frog and interest in building solutions and a future for the frogs in young hearts.

After the readings, the kids were ready to go to the zoo and help, Davidson says. “They know now that they shouldn’t release their pets or bait in nature. That this is how the diseases of salamanders get spread. Maybe they can teach Mom and Dad too!

“What would we do without frogs? They eat harmful insects, they teach us lessons about life, and hold secrets for human health, and not just as research organisms or models,” Davidson says.

Some of Davidson’s scientific colleagues and others have recently found that chemicals on the skin of frogs inhibit human immunodeficiency virus (HIV-AIDS) and many other diseases.

“Hopefully our children and grandchildren pay attention and we continue to support organizations like Arizona Game and Fish, U.S. Fish and Wildlife, The Phoenix Zoo and other groups building practical solutions to our environmental challenges. It’s important.”