How will global changes increase the need for better water management in the coming years? Ben Warner, who will receive his doctorate in sustainability from the School of Sustainability at Arizona State University, investigated the causes of water scarcity in his field research.

In a rural, semi-arid region of northwestern Costa Rica, Warner worked directly with water and agricultural managers. His findings have since been used to refine current water management policy in the region. 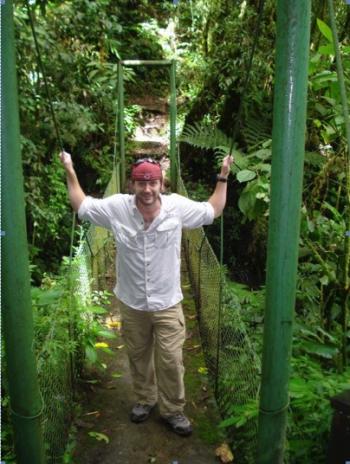 After a post-doctoral stint at the University of Massachusetts, Warner plans to work as a consultant on water scarcity, as well as continue his research.

In Costa Rica, Warner found that drought and international trade liberalization treaties have had a major impact on small farmers.

The economic impact combined with increasing drought in northwestern Costa Rica resulted in greater vulnerability to global changes and the power to adapt to them.

“Smallholder farmers’ livelihoods have been greatly diminished, and large rice and sugarcane farms are now more profitable,” he says.

As Warner sought how to increase farmers’ ability to cope with limited market access and increasing drought, he collected data from workshop proceedings, focus groups, interviews and surveys from small farming households within the Arenal-Tempisque Irrigation Project in Guanacaste, Costa Rica.

His analysis revealed that farm size, farming tenure, the presence of family members working outside of the agricultural sector, livestock ownership, perceptions of climate change and household reliance on agriculture were determining factors in farmers’ decisions to adjust their livelihoods. His work contributed to a multi-organizational effort to reshape agricultural water policy in northwest Costa Rica.

After Warner earned a civil engineering degree at Purdue University, he worked as a consultant designing large-scale water infrastructure projects. Then, he found himself drawn to ASU for his doctorate because of the university’s approach to interdisciplinary studies in the field of water sustainability.

“My program supports research in the interactions between rural development and large-scale water infrastructure. This interdisciplinary focus is not the norm across universities, but it is becoming more accepted.”

Warner was awarded the Graduate Completion Fellowship in spring 2014 to complete his dissertation.

Tafoya will work for change and justice for her people, the Jicarilla Apache Nation. 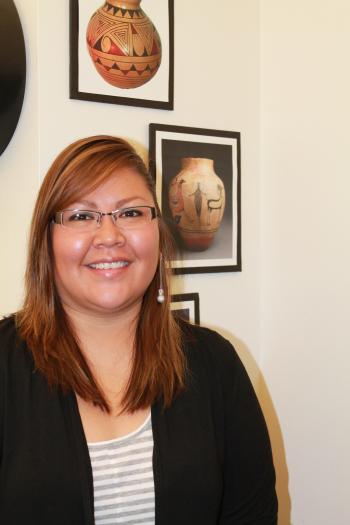 After graduating from ASU in May with a double major in American Indian Studies and justice studies, as well as a minor in political science, Tafoya will earn her master’s degree in criminology before going to law school to study federal Indian law.

Tafoya has excelled during her years at ASU, most recently by being named the College of Liberal Arts and Sciences Dean’s Medalist in American Indian studies, as well as being nominated for the Dean’s Medal in justice studies. She is also this year’s recipient of the Jean Chaudhuri Memorial Scholarship.

Choosing justice studies as a dual major gave her a better understanding of the problems that affect her tribe, such as domestic violence and child abuse, while political science provides knowledge of state and local government.

“I want to make the tribal system more efficient,” she said. “I’m a really big proponent of restorative justice that focuses on traditional values that American Indians can use to promote justice based on their traditions for people who commit crimes.” For instance, a domestic violence incident may be addressed by bringing the parties involved together to think of a traditional way to heal. Restorative justice is a way to bring healing and balance back to the community.

Choosing ASU as her top university was relatively easy for Tafoya, who considered schools in New Mexico and California, but chose ASU after she heard about the strong American Indian Studies program here with faculty members who are all members of tribal nations.

“I think that it is important that you are taught by American Indian people. There is that true connection to that lived experience,” she said. “The faculty is very inviting and willing to help you. Through American Indian Student Support Services, I was able to get involved with other students.”

Faculty experiences are enriched because of their time spent in reservation communities, Tafoya said.

In line with this philosophy, Tafoya is planning on practicing law for her people, as well as offering a legal voice from inside the community to aid in tribal law and business ventures.

Favorite memories of ASU include meeting people from many different tribes and learning about justice studies as it applies to American Indian people.

“I work with youth during the summer when I go home. It really helped me see a lot of the issues in my community and how I can be a positive force for the youth I work with,” she said. Other moments include learning research techniques in justice studies, participating in American Indian Studies events and attending Native Nations to learn about nation building for American Indian communities.

Attending law events during the summer, such as the LSAC Discover law NA-PLUS program, was a great opportunity for Tafoya to interact with Native American attorneys and learn how they work within federal Indian law.

“A lot of the work that they do is pro bono work, and their focus is to give back to the American Indian community,” she said. “I learned that it is very important to work hard and to be a positive role model in your community when you’re on the other side of the table as a judge or lawyer. Your reputation matters.”

Learning through justice study classes at ASU gave her an expansive view of how the legal system works.

“I thought it was a necessity to learn both the historical and present issues that face American Indians, to learn about sovereignty and colonization. I took justice studies courses because I wanted a more holistic view on the law,” said Tafoya, who is from Dulce, N.M., and is a citizen of the Jicarilla Apache Nation and of Laguna Pueblo descent.

Tafoya is looking forward to the next chapter in her life as she continues her education and serves as an inspiration for her younger siblings and their children.

“Education is attainable, and it isn’t limited to age. I want them to know that it is an important part of life,” she said. “Education is a key to American Indian people being able to support their economy, protect their sovereignty, their land and traditions. Education is a way to preserve these things for the generations that will come after me.”