Sun Devils move on to 2nd round of NIT

It might be the NIT, but the Sun Devils came to play as if they were a part of the NCAA Tournament.

Piggybacking off one of its best first half performances of the season, taking a 46-27 lead into the locker room, ASU never showed sign of weakness as it handled Detroit from start to finish, going on to bounce the Titans, 83-68. 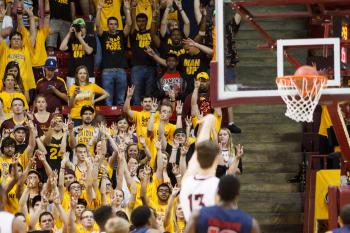 The Sun Devils move on to the second round, where they will travel to Waco, Texas to face the Baylor Bears for a 5 p.m. (PT) tipoff, March 22.

Jahii Carson and Carrick Felix took over the heavy lifting for ASU, as Carson finished with 22 points to Felix's 21, despite getting in foul trouble midway through the second half. Carson, who shot 7-10 and 8-10 from the free throw line, also added 10 rebounds to notch a double-double. He missed a triple-double by three assists, as he had seven dimes on the night.

Felix also shot the ball well, finishing 8-13 from the field and 5-6 from the free throw line. He also had seven rebounds.

The Sun Devils got off to a monstrous start to begin the game, jumping out to an early 18-4 run thanks to early 7-10 shooting, while Detroit could not find a basket deep into the contest. They began the game shooting 0-6, and were forced to call a timeout with 13:17 to play, still searching for a basket.

By the time the Titans hit their first shot, with 10:14 to play in the half, ASU held a commanding 24-8 lead. Detroit officially began the game shooting 0-10 before getting its first basket to fall through. During that span, the Devils out-rebounded the Titans 17-2, including seven offensive rebounds to their one, to go along with an 11-0 second-chance points advantage.

At the official timeout with 7:52 to play, Arizona State still assumed a large 20-point lead, 30-10, showing no signs of slowing down its up-tempo pace.

Detroit welcomed the halftime buzzer, down 46-27, feeling fortunate the deficit was not any greater. Felix and Carson tormented the Titans throughout the half, finishing a combined 9-12 from the field. Felix completed the first 20 minutes of play with 15 points on 5-7 shooting to go along with five rebounds, while also connecting on 5-6 of his free throws. Carson also finished the half in double figures, scoring 12 points on 4-5 shooting. The point guard also led the team in rebounding at the break, notching seven.

While ASU shot a quality 58.3 percent on 14-24 shooting over the first half of play, Detroit's shooting percentage proved to be anything but. They finished at a dismal 22.2 percent on 6-27 shooting. The Titans survived by going 15-15 from the charity stripe, but the Sun Devils equalized by going 16-20 themselves.

Arizona State out-rebounded Detroit 27-6 in the first half.

Coming out of the locker room, however, the Sun Devils struggled to find the same hop to their step they had throughout the first half, allowing Detroit to move to within ten points with 16:59 to play thanks to a Nick Minnerath three-pointer.

With 14:11 to play, the Titans cut the lead to single digits for the first time since early in the first half, with the score 51-42. However, back-to-back buckets by Carson re-extended the lead to 13, as the two squads began trading baskets.

Finally able to put a string of points together, the Sun Devils put up six-straight of their own, regaining a 17-point advantage, 65-48, with 8:02 to play.

After a beautiful bounce pass from Carson through multiple defenders to Felix, who laid it up and under for two, ASU led by 17 with 3:46 to play, signaling to the crowd it would be all right for them to head to their vehicles.

With another victory, Arizona State tacked up its 22nd victory on the season, improving to 22-12.

ASU researcher John Chaput has been hunting for a biological Rosetta Stone – an enzyme allowing DNA's 4-letter language to be written into a simpler molecule.

The discovery of the Rosetta Stone resolved a longstanding puzzle, permitting the translation of Egyptian hieroglyphs into Ancient Greek.

John Chaput, a researcher at Arizona State University’s Biodesign Institute has been hunting for a biological Rosetta Stone – an enzyme allowing DNA’s 4-letter language to be written into a simpler (and potentially more ancient) molecule that may have existed as a genetic pathway to DNA and RNA in the prebiotic world. 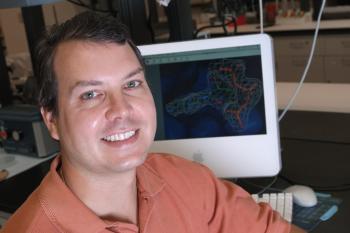 Research results, which recently appeared in the Journal of the American Chemical Society, demonstrate that DNA sequences can be transcribed into a molecule known as TNA and reverse transcribed back into DNA, with the aid of commercially available enzymes.

The significance of the research is three-fold:

• It offers tantalizing clues about how DNA and RNA – which encode the building plans for all earthly life – may have arisen from more primitive information-carrying molecules.

• Contributes to the field of exobiology – the search for alternative life forms elsewhere in the universe.

• Points to possible applications for TNA and other unusual nucleic acid molecules (known as xenonucleic acids or XNAs) in molecular medicine.

In the case of biomedical applications, XNAs may be developed into aptamers—molecular structures that can mimic the properties of naturally occurring polymers, folding into a variety of 3-dimensional forms and binding with selected targets. Aptamers are useful for a range of clinical applications including the development of macromolecular drugs.

“TNA is resistant to nuclease degradation, making it an ideal molecule for many therapeutic and diagnostic applications,” Chaput says.

The structural plans for organisms ranging from bacteria to primates (including humans) are encrypted in DNA using an alphabetic code consisting of just A, C, T & G, which represent the 4 nucleic acids. In addition to their information-carrying role, DNA and RNA possess two defining properties: heredity, (which allows them to propagate their genetic sequences to subsequent generations) and evolution, (which allows successive sequences to be modified over time and to respond to selective pressure).

The chemical complexity of DNA has convinced most biologists that it almost certainly did not arise spontaneously from the prebiotic soup existing early in earth’s history. According to one hypothesis, the simpler RNA molecule may at one time have held dominion as the sole transmitter of the genetic code. RNA is also capable of acting as an enzyme and may have catalyzed important chemical reactions leading eventually to the first cellular life.

But RNA is still a complex molecule and the search for a simpler precursor that may have acted as a stepping-stone to the RNA, DNA and protein system that exists today has been intense.

A variety of xenonucleic acids are being explored as candidates for the role of transitional molecule. In the current study, threose nucleic acid or TNA is investigated. Chaput says that establishing TNA as a progenitor of RNA would require demonstrating that TNA can perform functions that would help support a pre-RNA world. Of particular importance, would have been the ability to replicate itself in the absence of protein enzymes.

Like DNA, TNA can form double-helices – spiral staircase structures consisting of the 4 nucleotide bases, which make up the ladder-like rungs, and a sugar and phosphorus backbone, which forms the ladder’s railing. The sugar portion of this backbone is a defining component of the nucleic acid. DNA uses deoxyribose, RNA uses ribose and TNA uses threose.

Both DNA and RNA have sugars containing five carbon atoms, but TNA’s threose sugar contains only four. This enables TNA to assemble from just two identical carbon units, making it far easier to form under the non-biological conditions than RNA or DNA.

Despite TNA’s chemical distinctiveness, it is similar enough to DNA and RNA to be able to interact with these familiar molecules and exchange information. In addition to forming helices, TNA segments can bind with complementary DNA and RNA strands through Watson-Crick base pairing, thus making TNA an alternate self-replicating entity. The study of TNA and other artificially-produced genetic polymers is part of a rapidly emerging discipline known as synthetic genetics.

Powerful tools allow for high-throughput production of molecules with specified traits, built from xenonucleic acid molecules like TNA. In the current study, Chaput and his research team demonstrate that certain commercially available enzymes can facilitate the transcription of DNA sequences into TNA and back again into DNA and that the TNA sequences can be induced to evolve under the influence of environmental cues. The process is known as in vitro selection.

To accomplish this, large pools of TNA molecules are produced from DNA templates and then exposed to a particular molecular target. The small fraction of the random-sequence TNA strands structurally capable of binding with the target are extracted and reverse-transcribed back into DNA, then amplified using polymerase chain reaction (PCR).

The process can be repeated, allowing for significant enrichment of the desired aptamer. Indeed, the authors note that a single round of selection in their experiment produced a 380-fold enrichment from an original library of 1014 DNA templates. The authors note that the method is therefore capable of pinpointing and enriching a particular aptamer of predefined function from a staggering 1015 non-functional sequences. (One potential benefit of constructing aptamers from TNA is improved stability – natural enzymes that rapidly break down DNA and RNA do not degrade them.)

Prior to the current study, researchers had been frustrated that only severely abbreviated lengths of DNA could be faithfully transcribed into TNA. The limiting factor in the process was an effective enzyme to guide the accurate transcription of the DNA message. In the case of normal biological transcription, DNA is transcribed into RNA with the help of a specific enzyme known as DNA polymerase. Such naturally occurring polymerases, Chaput points out, are highly specific, and don’t work well for DNA to TNA transcription or reverse transcription.

Recent advances in protein engineering however, have produced a new breed of synthetic polymerases. In the current study, one of these – known as Therminator DNA polymerase, faithfully transcribed a 70 nucleotide DNA sequence into TNA, while another, known as SuperScript II (SSII) performed reverse-transcription back into DNA with impressively high fidelity.  Sequences of both 3-letter and 4-letter DNA messages were transcribed and reverse transcribed, both with over 90 percent accuracy.

The research paves the way for more sophisticated manipulation of TNA and other xenonucleic acids and may strengthen the case that TNA or a closely related molecule set the stage for the emergence of RNA and the first earthly life.

Given the enormous potential for this research for the fields of synthetic biology, exobiology and medicine, it is likely that XNAs will be produced in greater abundance by large chemical laboratories. Currently, the synthesis and purification of nucleoside triphosphates needed to form XNA backbones remains a delicate and labor-intensive process.