Science, technology, engineering and mathematics (STEM) fields are traditionally heavily dominated by males, which is of great concern to universities as they try to improve student retention and achievement. One exception to that trend is in the field of biology. Of undergraduate biology majors, more than 60 percent are female, and about half of biosciences graduate students are women.

Given that, a common assumption is that biology is one STEM field that no longer faces gender inequalities. However, researchers with Arizona State University and the University of Washington have proven otherwise. In the largest known analysis of gender differences in introductory college-level biology courses, researchers have found evidence of gender-based gaps in both achievement and class participation. 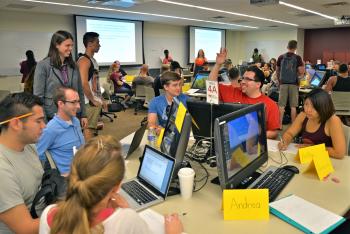 The findings appear in the current issue of the journal Cell Biology Education – Life Sciences Education, published quarterly by the American Society for Cell Biology.

"Often, gender differences are assumed to be present only in fields where males outnumber females, and where there is a strong emphasis on math,” said Sara Brownell, assistant professor with ASU’s School of Life Sciences. “But we are seeing it in undergraduate biology classrooms that do not focus on math – where females make up about 60 percent of the class – indicating that this could potentially be a much more systemic problem. It’s likely this is not unique to physics or biology, but rather true of most undergraduate classrooms."

Researchers studied 23 classes at a research one (R1) university over a two-year period. The courses included mostly sophomores and biology majors, and were generally taught by two instructors each. Of more than 5,000 students enrolled in the courses, nearly 60 percent were female.

After studying exam performance and class participation, scientists discovered that even with similar college GPAs, female students had average exam scores of 2.8 percent lower than male students. In addition, while female and male students were equally likely to ask a question during class, when asked to volunteer responses to questions, 63 percent of males on average spoke up – even though they comprised only 40 percent of the classroom.

Co-author Sarah Eddy, a postdoctoral scholar at the University of Washington, says the gender gap in the classroom, along with performance equality, present problems.

"Introductory biology classes are the first opportunities for many students to interact with professionals and peers in their intended fields,” said Eddy. “This is a critical opportunity to build up their confidence so that they can succeed in the field. Part of building that confidence is gaining recognition from their classmates and instructors. If females aren't heard as often as males, they don't have the same opportunity to succeed as biology majors."

Brownell and her team suggest that in order to improve student retention and achievement in biology, new strategies must be put into place.

What can instructors do to level the playing field? To positively affect the participation differences in large classes, the researchers recommend using a pre-sorted list of student names to randomly call on them, rather than allowing students to raise their hands. Brownell and her team say that while students may be resistant to the method at first, it is a more equitable way to structure classroom discussions.

"In order to solve the problem, instructors must be aware that it even exists,” shared Brownell. “That's really the point of this paper – to illustrate that there are gender differences that should not exist. The next steps are to try to determine what causes these differences, and then develop additional strategies that instructors can use to lessen those differences."

The research team included Brownell from ASU, as well as Eddy and Mary Pat Wenderoth from the University of Washington. Support for this study was provided by NSF TUES 1118890.

ASU engineering graduate refused to be statistic, powered up her career

Carrie Culp likes puzzles and she figured out a big one: how to make her life work.

ASU engineering graduate refused to be statistic, powered up her career

Carrie Culp could have been a statistic: single mother of three, high school diploma, hard-working but hamstrung by a lack of education, hanging onto the lower rungs of the financial ladder.

She could have been a statistic, but it isn’t in her nature. “I always liked a puzzle,” she said. “I liked to put things together, to figure out how to make things work.” 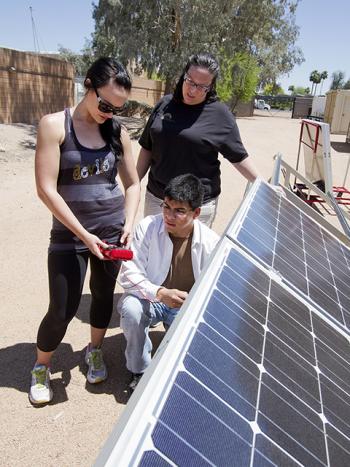 So she figured out how to make her life work, going to community college, transferring to the Ira A. Fulton Schools of Engineering at Arizona State University, earning bachelor and master’s degrees in electrical engineering through the accelerated program and landing an enviable job helping run the country’s power grid at Midcontinent Independent System Operator Inc.

She loves to tell her story to those coming behind her. Culp grew up in Buckeye, where her family worked on farms, chopping cotton and harvesting corn, working on tractors. When her parents got divorced, her mother worked four jobs to keep up with the bills, and Culp would pitch in and help with the custodial work.

She graduated from Buckeye Union High School, became a young mother and started doing office work. But it felt like a job with no future, and she knew she should go back to school.

She signed up for math and English classes at Estrella Community College and engineering classes at Glendale Community College. She and her kids moved into her mom’s house, and she re-engineered the Arizona room to become a bedroom and bathroom, rewiring the electricity by herself and putting in plumbing with the help of her uncle, a master plumber.

“The first couple semesters, I was part-time,” she said. She got her A+ certification in computers and started working at the Estrella Fitness Center. “I was doing a lot of coding. I’d get into a code warp, working on a problem, and I’d look up and it would be the next day. I didn’t like to let go of anything.”

But she also realized she liked working outside, like her dad. She wanted to be more than a computer technician. So she got connected with the Motivated Engineer Transfer Students, or METS program, which connects community college students to the Ira A. Fulton Schools of Engineering.

She was offered a scholarship, enrolled at ASU, connected with others who had transferred and started volunteering to set up outreach visits for other Estrella students. It eventually became a job as an outreach coordinator for the program. In the meantime, she worked with QESST, the Quantum Energy and Sustainable Solar Technologies research center, focusing her studies on solar energy.

She did internships, joined the Society of Women Engineers, the Society of Hispanic Professional Engineers and the Institute of Electrical and Electronics Engineers (IEEE) Eta Kappa Nu honor society. She also worked with the Engineering Projects in Community Service, helping ship medical supplies to developing countries through Project C.U.R.E.

She was selected for a research position with North Carolina State in their “Engineering the Grid” program, and received a scholarship from the IEEE Power and Energy Society in the inaugural round of the Scholarship Plus Initiative, which was established to attract high-quality engineering students to the power and energy field.

“I got a lot of support, especially from the faculty,” she said. “I had a good study group of guys who are all friends.”

She was one of only two females in her senior classes, and thinks females avoid engineering because of misconceptions. “It’s not what people think,” she said. “It’s not just crunching numbers and wearing hard hats all day. Engineers help solve problems.”

Culp landed a job working for MISO after interning there last summer. The company describes itself as “an essential link in the safe, cost-effective delivery of electric power across much of North America.”

“It’s where transmission, generation and utilities all meet,” Culp said. “They help figure out demand and loads. Someone will say, ‘We’re going to shut down this coal-fired plant,’ and they will say, ‘Well, that means part of Michigan will go black.’”

Culp is now working with the newly integrated MISO offices in New Orleans.

“There are a lot of transmission upgrades needed in the southern region, and part of my job is to analyze and model the proposed projects,” Culp said. “I have to evaluate all the projects proposed for my region, reject ones that are not beneficial in the long term, further investigate those that have long-term potential and sometimes propose my own project solution for stakeholders to consider.

“Some of the projects I design or verify are worth billions of dollars, so it is important to get the best benefit to cost.”