Non-human primates can teach us a lot about ourselves, such as providing insight into how we evolved as a social species. 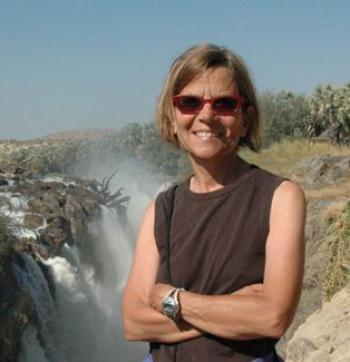 A professor in the School of Human Evolution and Social Change in the College of Liberal Arts and Sciences, Silk can often be found in Kenya, observing and documenting the behavior of baboons in their natural environment. She is also a research affiliate with the Institute of Human Origins and spends extended periods analyzing data from long-term studies and producing findings that are widely published and cited.

For her contributions to her field, Silk was recently elected to the American Academy of Arts and Sciences. Her cohort includes such prominent figures as novelist Tom Wolfe, Nobel Prize-winner Brian Kobilka and astrophysicist Neil deGrasse Tyson. The induction ceremony will take place Oct. 10 in Cambridge, Massachusetts.

The academy represents mathematics, medicine, the arts and humanities, public affairs, the physical and social sciences, business and government. Its membership comprises 4,600 fellows and 600 foreign honorary members whose knowledge and influence shape its publications and research.

Silk is a widely regarded scholar of primate behavioral ecology, evolution and sociality, with noted studies on prosocial preferences among chimpanzees and children to her credit, but in recent years she has become known for baboon research.

Among her major findings is the discovery that females show a clear preference for maternal kin – especially mothers, daughters and sisters – as well as paternal half-sisters, and that their bonds prove invaluable.

“Analyses have shown that females form strong, equitable, supportive, tolerant and durable bonds with particular partners,” Silk explained. “Females that have strong and stable bonds with other females live longer, and their infants are more likely to survive than those of females with weaker, less stable bonds.”

Another important finding is the discovery that female social integration is not influenced by dominance rank or environmental changes.

Silk’s analysis was the first systematic evidence that investment in social relationships results in a fitness payoff – increased reproductive success – for females.

A message to faculty, staff from ASU Counseling Services

The end of the semester is a time that some students may be particularly susceptible to stress and anxiety related to academic and financial pressures. Learn how you can help as an ASU faculty or staff member.

A message to faculty, staff from ASU Counseling Services

The end of the semester is a time that some students may be particularly susceptible to stress and anxiety related to academic and financial pressures.

While most students face life stressors with no significant problems, a small but significant portion of students may experience more serious mental or behavioral health issues as a result of stress.

As someone who interacts with students on a regular basis, ASU faculty and staff are in a pivotal position to identify inconsistent behavior that may be of concern. If you find that you are concerned about a student, there are steps you can take and resources available to support you.