Kinzig, chief research strategist for ASU’s Global Institute of Sustainability and a professor at ASU’s School of Life Sciences, urges policymakers to alter laws and regulations, such as recycling mandates and energy restrictions, based on social values and the associated behaviors. 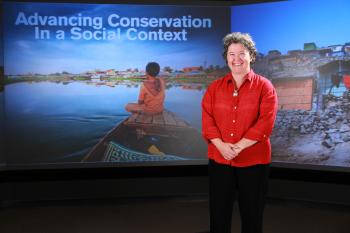 In a recent article in the journal Bioscience, the team shares findings that pro-environmental behaviors (e.g., recycling and water conservation) can influence pro-environmental values, and that the interaction also works in reverse.

“Often we believe that we behave in a certain way because we hold particular values and that is certainly true,” Kinzig says. “But our values may also shift based on our behaviors. We may initially engage in recycling, for instance, because of an economic incentive, but the repeated act of recycling may create a value for recycling.”

Simply put, the report states that if policy dictates a pro-environment behavior, the repeated act of that behavior will become second nature – and even part of a value system – for individuals required to do it. The researchers argue that behavioral change may be the tipping point for real climate change mitigation and one step closer to a sustainable future.

Trained in physics, Kinzig’s expertise lies in ecology, biodiversity, ecosystem economics, and conservation. She leads the Sustainability Scientist workgroups at the Global Institute of Sustainability and is the co-director of the ecoSERVICES group in the College of Liberal Arts and Sciences. Kinzig’s research balances the fine line between social sciences and life sciences, connecting human dynamics with those of the natural world.

Co-authors include Nobel Prize winners Kenneth Arrow and the late Elinor Ostrom, named one of TIME Magazine’s 100 most influential people of 2012 and the founding director of ASU’s Center for the Study of Institutional Diversity.

For the full article, visit aibs.org/bioscience-press-releases/.

ASU is not closed for Presidents Day. Plan your travels on Monday accordingly.

Plan your travels on Monday accordingly

Whether you usually park on campus or travel by shuttle, bus or rail, take note of this information regarding parking and transit for Presidents Day, Monday, Feb. 18.

ASU is not closed for Presidents Day. ASU intercampus and FLASH shuttles will operate on their regular schedules on Monday, Feb. 18, and regular parking regulations remain in effect at all campuses.

All Valley Metro and Orbit buses and METRO light rail trains will operate according to holiday/Sunday schedules on Presidents Day this Monday, Feb. 18.

RAPID and EXPRESS routes do not run on Sundays and will, therefore, not operate this Monday.