Scientists have long been researching how insect colonies function – particularly how their complicated system of living together works. Researchers have also looked for answers about these interactions in animals' DNA.

For the first time, Arizona State University scientists, along with a large group of international researchers, have sequenced and analyzed the genome of one termite species. This means researchers can now compare the termites' DNA with that of ants and colony-building bees. 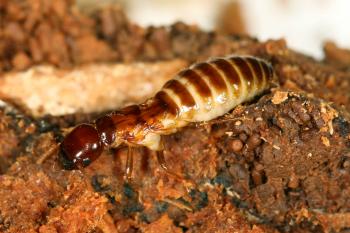 For scientists, this is of particular importance because termites have a similar lifestyle to bees and ants, as they too form colonies and have various castes, such as workers, and others whose job it is to reproduce. Yet interestingly, they are not closely related to Hymenopterans, which includes bees and ants. Hymenopterans are one of the largest orders of insects, which include over 150 thousand winged species.

The study is published in the May 20 issue of the online journal Nature Communications.

"The analysis of the termite genome is crucial to improving our understanding of decisive steps in the evolution of insects, and also of the development of social insects," said Nicolas Terrapon, one of the study’s main authors. Terrapon was involved with the project while working as a post-doctoral researcher at the Institute of Evolution and Biodiversity at Münster University. Now, he is a researcher at Aix-Marseille University in France. "Termites are, in contrast to bees and ants, quite original insects, and belong to the cockroaches. Our research will help us gain a better understanding of the evolution of insects in general," he added.

The research team examined whether the evolution of sociality in various groups of insects was based on the same molecular mechanisms. They discovered not only differences, but also things they had in common.

One difference they found was in groups of genes involved in the maturing of sperm in male animals. In the case of the Zootermopsis nevadensis termites (dampwood termites) that live in wood, some of these genes occur more actively or in greater numbers than in the species of ants and bees that were examined. The researchers believe this reflects a unique feature of their lifestyle – that while male ants and bees, for example, produce a large number of sperm just once and then die shortly after mating, male termites mate with the queen of their nest several times during their life.

“In societies of ants, bees and wasps, queens fertilize eggs throughout their life from stored sperm that they received during a mating event that occurred once in their life,” said Jürgen Liebig, associate professor with ASU’s School of Life Sciences. “In contrast, termites form pairs of queens and kings and re-mate repeatedly. This difference in mating biology did not receive as much attention as other aspects of their social organization. Our study indicates that at least in this termite species, adaptations in male mating biology are important, as they show one of the clearest traces of social evolution in the genome we found.”

Another difference is that in comparison with the highly social hymenopterans, the dampwood termites have only a few olfactory receptors. In general, smell plays an extremely important role for social insects, not only in communication and in recognizing nest comrades, but also in looking for food. However, dampwood termites have a simpler lifestyle than ants, honey bees or more highly developed termites. For example, in looking for food, they do not move away from the nest and display less complex communicative behavior. The lower number of olfactory receptors reflects this lifestyle.

“Compared to the societies of mount building termites and the ant, bee and wasp societies, dampwood termites live in a piece of wood that they do not leave for foraging,” added Liebig. “They have less of a need for sophisticated communication and discrimination of foreign individuals. The low number of olfactory receptors we found in the genome seems to be an indication of this reduced need for olfactory abilities.”

The researchers also discovered things they have in common. Dampwood termites have, just like ants, an especially large number of genes that play a role in immune responses. Social insects are more dependent on effective infection controls, as pathogens will otherwise spread easily in their densely-populated colonies. Moreover, the scientists have found proteins that might play an important role in the development of caste-specific features – just like a similar system in honey bees.

The School of Life Sciences is an academic unit of ASU’s College of Liberal Arts and Sciences. 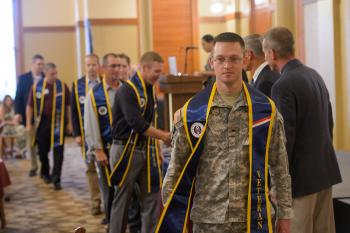 ASU continues to be lauded for its work with veterans, having been named a “Military Friendly School” by G.I. Jobs magazine in 2014 for the fifth consecutive year. In its Best for Vets: College 2014 rankings, Military Times magazine named ASU one of the top 50 colleges in the country.

ASU also ranks among the nation’s first higher education institutions to embrace “8 Keys to Success” – federal government guidelines for encouraging veteran students on campus and improving their employment outcomes. Information and video of ASU veterans are available at https://veterans.asu.edu/.

The 2014 U.S. News report focusing on the nation’s student veterans analyzed 197 online degree programs at institutions that also offer a wide range of benefits for veterans. Only regionally accredited degree-granting programs offering classes that were 100 percent online were considered.

Veteran enrollment is fast approaching 5 percent of ASU’s entire student body when counting both veterans and their dependents who are students. Currently, ASU has more than 3,000 veterans and dependents enrolled, with 2,000 of them using the Post-9/11 GI Bill.

The number of student veterans at ASU is increasing thanks to support from campus leadership, as well as centralized campus services for vets available at the Pat Tillman Veterans Center, said the center's director, Steven Borden, a retired Navy Captain.

“ASU leaders demonstrated vision and understanding in creating our center as a place to welcome veterans on campus,” he said. “They foresaw a growing enrollment of vets as a result of the Post-9/11 GI Bill and anticipated their special needs re-entering academic life.”

In February, ASU also launched its new Office for Veteran and Military Academic Engagement. Developed in partnership with the Pat Tillman Veterans Center, the office is designed to connect veterans and university communities, and to create venues that reflect veterans’ voices and experiences.

“Having veterans’ voices reflected in education is one of the core goals of this office,” said director Mark von Hagen, who serves on the faculties of global studies in the School of Politics and Global Studies and history in the School of Historical, Philosophical and Religious Studies in ASU’s College of Liberal Arts and Sciences. “We want to help students from diverse backgrounds successfully navigate and achieve their educational and career goals.”