Think you got what it takes to be on "Jeopardy!"? Try your hand at some questions from past "Jeopardy!" games:

(scroll down for answers)

2. Around 1542 explorer Juan Rodriguez Cabrillo discovered this island off L.A. & it's believed he's buried there too.

4. According to C.S. Lewis, it was bordered on the east by the Eastern Ocean and on the north by the River Shribble.

7. To marry Elizabeth, Prince Philip had to renounce claims to this southern European country's crown.

9. A porch adjoining a building, like where Mummy often served tea.

10. Sakura cheese from Hokkaido is a soft cheese flavored with leaves from this fruit tree.

A riveting documentary about the lives of immigrants, told by immigrants, is screened at ASU Tempe and West campuses

A riveting documentary about the lives of immigrants, told by immigrants, is screened at ASU Tempe and West campuses

What
Performance in the Borderlands opens its fall season with a screening of an award-winning documentary film, The Other Side of Immigration, Nov. 17–18 on both the ASU Tempe and west campuses. The public also has an opportunity to meet filmmaker Roy Germano after both screenings during Q-and-A sessions. 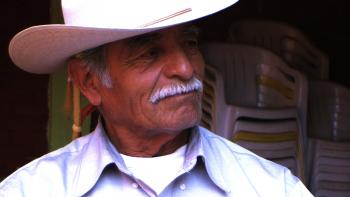 Cristobal, an immigrant from Mexico, is featured in Roy Germano’s award-winning documentary The Other Side of Immigration, which will be screened at the ASU Tempe and West campuses Nov. 17–18. Photo by Roy Germano. Download Full Image

The Other Side of Immigration is based on more than 700 interviews with men and women from Mexico. The film explores why so many people leave small, Mexican towns to work in the United States, and what happens to the families and communities they leave behind. According to Tamara Underiner, ASU School of Theatre and Film professor and director of the Performance in the Borderlands initiative, the film seeks to promote understanding of “the other side” of the story.

"The voices in the film take viewers across the border, providing critical insights into why so many Mexicans come to the United States, and also gives a rare window into what life is like for the families and communities they leave behind," Underiner says.

The Other Side of Immigration was written, directed and produced by Roy Germano, who originally became interested in immigration issues while waiting tables at a restaurant in Chicago in his early twenties. Conversations with his co-workers, the majority of whom were undocumented immigrants from Mexico, inspired him to pursue Ph.D. research on the topic at the University of Texas at Austin. Five years later, while in rural Mexico conducting a survey of over 700 families for his dissertation, Germano brought along a camera and shot what ultimately became The Other Side of Immigration. He earned his Ph.D. in 2010 with UT-Austin’s top honor for a graduate student and currently is a visiting assistant professor of politics at The New School in New York City.

The Other Side of Immigration recently had its national DVD release Oct. 26, 2010, and has been presented at over 50 film festivals, universities, and community events in the U.S. and Europe. For more information about the film, visit theothersideofimmigration.com.

The Other Side of Immigration screenings are the first in a series of events in Performance in the Borderland’s Voices from theOther Side of the Fence. The screenings are made possible though a partnership between the ASU School of Theatre and Film, the ASU School for Global Studies, and ASU’s New College of Interdisciplinary Arts and Sciences. This event also is sponsored by the ASU West Division of Humanities, Arts, & Cultural Studies; the Master’s Program in Social Justice and Human Rights. For information about the screening, or Performance in the Borderlands, contact Tamara Underiner at tamara.underiner@asu.edu.

Cost
The film screenings and Q-and-A sessions with the filmmaker are free and open to the public.

Visit the ASU School of Theatre and Film on Facebook at: http://www.facebook.com/pages/ASU-School-of-Theatre-Film-MainStage-Season/141384062556129?ref=sgm.

The School of Theatre and Film in the Herberger Institute for Design and the Arts at Arizona State University provides a comprehensive range of courses in performance and directing; design and production; new work development; theatre and performance studies; film; and theatre for youth. Its Theatre for Youth program is nationally ranked in the top three and the dramatic writing/playwriting program is ranked 15th among public institutions by U.S.News & World Report. To learn more about the School of Theatre and Film, visit theatrefilm.asu.edu.