To most people, biking from Flagstaff to the Phoenix metro area at the mercy of an Arizona summer sounds more like a grueling punishment than a memorable adventure. And when Mia Armstrong’s father proposed the idea to her, she admits she was initially wary. 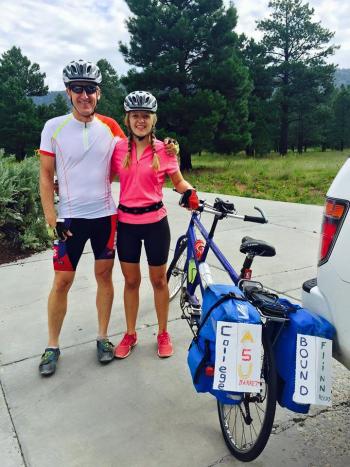 Mia Armstrong and her dad, Joe Bob, prepare for their journey from Flagstaff to the Valley. Despite the sport and surname they have in common, they are no relation to the famous cyclist Lance Armstrong.<br><br> Photo courtesy Mia Armstrong. Download Full Image

“The whole idea of it was super scary, and there was a big prospect for failure,” she said, “but when it came down to it, I thought I’d probably regret it more if I didn’t do it than if I did do it — even if there were some hiccups along the way.”

So an itinerary was planned, and Armstrong and her father set out for a 235-mile ride that would mark the beginning of her journey as a student at Arizona State University.

Getting to know Mia

At the age of 17, the global studies freshman is at once self-assured and open-minded, with an air of spontaneity that is refreshingly anomalous.

She takes politics seriously but can still laugh at Donald Trump’s hair. She cares enough to prepare a week’s worth of healthy meals ahead of time but is an unabashed coffee lover.

A native of Flagstaff, Arizona, she was imbued with a love of the outdoors from birth.

“Flagstaff has a really active culture so [my family and I] would go skiing and snowboarding and hiking and canyoneering and biking,” said Armstrong, who will also be a student in Barrett, The Honors College.

Her appreciation for politics came later.

During her freshman year of high school, Armstrong took a government class that happened to be taught by an “amazing” teacher who inspired her to become more politically involved.

“I like that politics provide a way to change things,” Armstrong said. “I think it’s cool to organize a movement and have people working together toward something.”

She is now a member of College Democrats of America and has worked as an intern in the Washington, D.C., office of U.S. Congresswoman and ASU faculty associate Kyrsten Sinema. A cursory look at her Twitter page reveals that she is already paying close attention to the November 2016 election. Armstrong even tweeted when she registered to vote, though she is still undecided on a candidate.

“There’s a lot of time [until the election], and I’m trying to keep an open mind and just see what happens,” she said.

Working together on the road

Instead of taking separate bicycles, Armstrong and her father – no relation to the identically surnamed Lance, though her father did know him peripherally when he biked in college – decided to use a tandem bike for their southern sojourn, mainly for safety reasons.

“Some of the roads were really busy, and there were times it got kind of scary,” Armstrong said.

Though her father had done long rides before, this was her first time taking a long road trip by bike. Armstrong had mainly mountain-biked.

Altogether, they biked for a total of three days.

On the first day of their trek, Monday, Aug. 10, they set out from Flagstaff around 9 a.m., navigating through the red rocks of Sedona to Cottonwood, then to Clarkdale, then stopping for lunch in Jerome before making their way up Mingus Mountain and down the other side to Prescott around 8:45 p.m.

Their total mileage for the day was 110.

“When we finally got to my grandparents’ house where we stayed that night, I kind of teared up a little because we didn’t know if we were going to make it and we did,” Armstrong said.

Upon reaching Prescott, Armstrong and her father got a much-deserved multi-day break when she attended a retreat there for Flinn Scholars. At 3:30 p.m. Thursday, Aug. 13, it was time to head out again. They traveled a total of 60 miles to Wickenburg that day, getting there in just about four hours, at 7:30 p.m.

The very next day they were on the road by 4 a.m., finally reaching the Scottsdale area around 10:30 a.m. after biking a total of 65 miles, exhausted but elated at their accomplishment.

Meditations on a journey

There were definitely hiccups, as Armstrong had envisioned. Only 20 minutes into the trip their speedometer broke and, later, they ran out of spare tubes for their tires. They took it all in stride, though, employing the help of Google Maps and making a pit stop in Cottonwood for extra inner tubes.

The last leg of the expedition was the roughest, Armstrong said. Though it was hardly the longest, it was the hottest and they were the most tired. Toward the end, they stopped every 10 miles or so, just long enough to cool off and chug a 32-ounce Gatorade. On one of these stops, they took refuge in the shade of an underpass.

Armstrong recalled it with amusement: “We stopped under an underpass once and just laid in the shade … we were just laying on the dirt under the underpass.”

There are other memories that weren’t as amusing, though.

During a series of downhill switchbacks that were “really scenic and beautiful” in the Yarnell area, Armstrong became reflective and somewhat sullen upon recalling the Yarnell Hill Fire tragedy that took the lives of 19 City of Prescott firefighters, called the Granite Mountain Hotshots, in 2013.

“That was definitely an emotional spot. And that was one of those times when I was like, ‘Wow, this is really hard, but this is not a millionth as hard as what those people went through, and what their families went through afterward.’ So that was something to think about,” Armstrong said.

And there was plenty of time to think. Having agreed with her father ahead of time to eschew headphones in favor of conversation and appreciating the nature around them, Armstrong found it was often a challenge to simply be present in the moment.

“It was a bit meditative at points, and when it got really hard I would just close my eyes and try to visualize finishing,” she said.

Coming from a graduating class of 17 at Basis Flagstaff, Armstrong is finding the head count at ASU’s Tempe campus to be delightfully overwhelming.

“It’s really cool being around so many people with diverse interests,” she said. “There are so many amazing professors and faculty members, and there are a lot of really cool opportunities.”

Armstrong plans to add economics as a double major and is also looking forward to studying abroad, though she hasn’t decided where yet. Further in the future, she hopes to attend law school and to pursue a career in government or the nonprofit sector.

Though she sheepishly admits she also applied to the University of Arizona, Armstrong feels confident with her final choice of ASU.

“I think that the decision I made was really right for me; I’m really happy here,” she said.

Skylar Mason, who lost her father in a crushing car accident that left her with permanent injuries, is now taking her dreams of being a journalist into the school her father wanted her to attend.

Skylar Mason has had a difficult year. 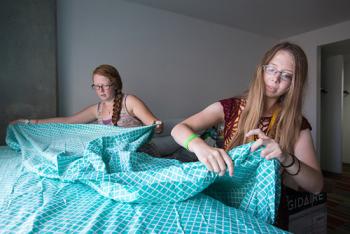 Skylar Mason (right) makes her bed with the help of her sister, Hannah, 16, as she moves into Taylor Place on Friday, Aug. 14. A year before, she survived a horrific car accident that killed her father, and now the Barrett scholar is embarking on a degree from the Walter Cronkite School of Journalism and Mass Communication. Download Full Image

She lost her dad in a violent car accident last summer that also dulled her senses, broke her bones and put her in the hospital for three weeks.

It was a difficult time, but the freshman in the Walter Cronkite School of Journalism and Mass Communication is looking forward to her first year at Arizona State University rather than looking back in despair.

“I know my dad wouldn’t want me to dwell on the past so much that it might inhibit my future,” said the 18-year-old Tucson native, who will also be in Barrett, The Honors College.

“I’m hoping my experience here is everything he would have hoped for.”

Mason survived the devastating car crash that instantly claimed the life of her 48-year-old father, Karl, when a woman driving a Chevy truck ran a red light and crashed into the Masons' Volkswagen Beetle. The July 20, 2014, accident shattered her skull, detached her left retina and rendered her left ear permanently deaf.

Spending a majority of the year with physical, speech and occupational therapists, and in surgery — six surgeries in all — Mason started her senior year at Tucson’s Ironwood Ridge High School in the second quarter.

Still, she never gave up hope of achieving her long-held dream to attend ASU this fall.

Mason has long held a fascination with writing.

She wrote poetry in grade school and several novels during her middle school years. But she fell in love with journalism her freshman year and eventually became editor-in-chief of her high school newspaper, Iron Quill, for two years.

“I was super introverted when I started and found out real quick you can’t be if you want to be a journalist,” Mason said. “Among other things, journalism has taught me how to interact with people.”

After the accident, which received its fair share of media coverage in the Tucson area, Mason experienced journalism from a real-world perspective.

“It’s definitely a lot more stressful being on the other side,” Mason said. “But it was a blessing in disguise because it was a good experience to talk about my father and help rehabilitate my speech.”

Mason’s speech was up to speed when she moved into Taylor Place on ASU’s Downtown Phoenix campus with some assistance from her mother, Meta; sister, Hannah; and brother, Kody.

Meta Mason said the family unit has always been tight and that they’ve pulled through a very difficult time by sticking close to each other.

“She’s my best friend, and we’ve never lived apart,” said Hannah, 16. “It’s the start of a new chapter in her life, and it’s sad to close the other chapter.”

Meta said their family’s strength in overcoming tragedy and change comes from the love and support of others.

“We thrive because our community, family, church and friends have carried us all this time,” Meta said. “We don’t know why Karl was taken from us and often we don’t understand. Sometimes you can’t look at the big problem but just look ahead.”

She says there are good days and bad when it comes to remembering her father, but a trip she took to the Cronkite School with him in 2013 when she was checking out journalism schools is a happy one she won’t soon forget.

“He loved the Cronkite School and said, ‘This place will give you the resources to give you the career you want,’ ” Mason said.

“He believed in this place, and so do I.”