In two short years, the State Farm Territorial Cup Series has emerged as one of the premier sponsored rivalry platforms in the country. As it enters its third year the SFTSC is a prime example of how a sponsor can work closely with schools and their communities to add value that did not exist previously. In a sponsorship world where many look to see how big of a piece of a pie they can garner for themselves, State Farm has found a way to help grow the pie for all parties involved. With agency support from AdSport, the State Farm Great Western Zone has worked closely with Arizona State University (IMG) and the University of Arizona (IMG) to build a comprehensive, three-pronged, rivalry platform that focuses on the in-state rivalry.

Each year, the schools' athletic departments compete head-to-head in eighteen (18) common, equally weighted, sports to determine which community can claim the bragging rights for that year. The winning school is awarded the Territorial Cup Series Trophy, which was inspired by the oldest rivalry trophy in collegiate athletics. By placing equal emphasis on all sports, the Series helps to build community awareness for less publicized Olympic sports. The fact that a point from Women's Gymnastics counts as much as a point from Football helps to keep the rivalry fresh and active for the entire school year, especially in the spring when most of the points are decided and traditional high interest sports like Football and Men's Basketball have hung up their uniforms for the year. The Series focuses on the message that “Every Game Counts” and that the rivalry between the schools is a yearlong affair.

What is truly unique about the Series, however, is that it goes beyond the field of competition and into local communities through the State Farm Territorial Cup Series Food Fight and the State Farm Good Neighbor Team. "The aim of our partnership is to not only spotlight athletic programs offered by each university, but also to help alleviate hunger in the community and address the educational funding challenges each university is currently experiencing," said State Farm Vice President - Agency, Laura Kunewa. The Territorial Cup Series Food Fight is essentially a year-long food drive where the Phoenix and Tucson communities compete head-to-head to see who can collect more food for local food banks on behalf of their respective universities. To date, the Food Fight has raised over 32,000 meals for Arizona's Hungry. The purpose of the Territorial Cup Series Good Neighbor Team is to recognize the efforts of student athletes at the University of Arizona and Arizona State University who exemplify all that is right about collegiate athletics. Eighteen student athletes from each school (one from each team competing in the rivalry series) who have excelled in Athletics, Community Service, and Academics are honored each year through an award and a donation in their name to their school's general athletic scholarship fund.

Standing on the diving board preparing for her jump, Elina Eggers closes her eyes and let’s the rest of the world fall into silence.

Standing on the diving board preparing for her jump, Elina Eggers closes her eyes and let’s the rest of the world fall into silence.

She doesn’t think about competing in the Olympics, her numerous Arizona State University records or the 13 gold medals she has won at the Swedish Nationals. 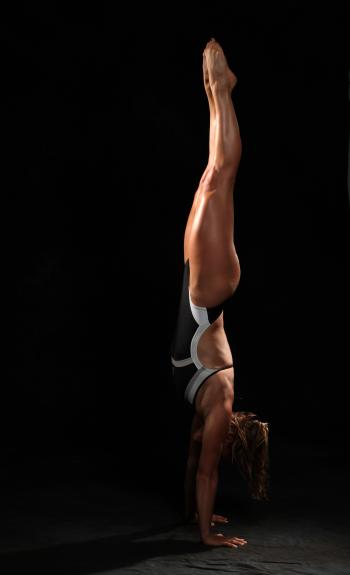 In that moment it is all about what she calls, “finding the right feeling” and remembering Coach Mark Bradshaw’s words of advice.

Growing up in Stockholm, Sweden, Eggers fell in love with diving after watching the sport on television.

When it came time to attend college, she chose ASU because of the ability to combine her studies with athletics, which Eggers says is not widely available in her home country.

It was also the recruiting of Bradshaw and the people she would soon call friends on the diving team that drew her to become a Sun Devil.

“I love my team. We have so much fun together and are very supportive of each other. Everyone works very hard,” said Eggers.

Among her list of athletic awards, Eggers has earned 2011 First-Team Capital One Academic All-American and became a two-time first-team Pac-10 All-Academic honoree with a 3.96 GPA in economics.

“To balance school and athletics you have to be organized and plan ahead. I try to do as much as I can ahead of time so I’m not rushing to complete my class work,” said Eggers.

In 2008 Eggers made a lifelong dream come true when she competed and placed 12 on the 10-meter platform at the 2008 Beijing Olympic Games.

“I’ve been diving my whole life and my goal has always been to compete in the Olympics,” explains Eggers. “I was so happy when I made the Olympic team. I had a really good meet.”

Over the course of her athletic career Eggers has placed fourth on the 10-meter platform at the NCAA Championship to earn All-America honors, earned a Bronze Medal on the 1-Meter at the Pac-10 Championships, and became the only Pac-10 female to Medal in each event – to name just a few accolades.

“I feel honored by the recognition. It has taken a lot of work to get here,” said Eggers.

Up next, Eggers will train for 2012 Olympic qualifications in February for the London games. But the ASU senior says if she has learned anything over the years, it is not over think things. She says that no matter the competition she sticks to her rigorous practice schedule and focuses on any improvements that need to be made.