Life in a warming world is going to require human ingenuity to adapt to the new realities of Earth. Greenhouse-gas-induced warming and megapolitan expansion are both significant drivers of our warming planet. Researchers are now assessing adaptation technologies that could help us acclimate to these changing realities.

But how well these adaptation technologies – such as cool roofs, green roofs and hybrids of the two – perform year-round, and how this performance varies with place remain uncertain. 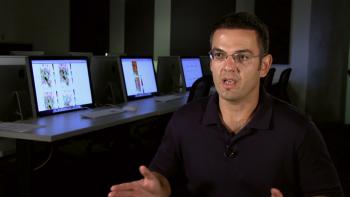 Now a team of researchers, led by Matei Georgescu, an assistant professor in Arizona State University's School of Geographical Sciences and Urban Planning and a senior sustainability scientist in the Global Institute of Sustainability, has begun exploring the relative effectiveness of some of the most common adaptation technologies aimed at reducing warming from urban expansion.

The work showed that end-of-century urban expansion within the United States alone, separate from greenhouse-gas-induced climate change, can raise near surface temperatures by up to 3 degrees Celsius (nearly 6 degrees Fahrenheit) for some megapolitan areas. Results of the new study indicate that the performance of urban adaptation technologies can counteract this increase in temperature, but also varies seasonally and is geographically dependent.

In the paper, “Urban adaptation can roll back warming of emerging megapolitan regions,” published in the online Early Edition of the Proceedings of the National Academy of Sciences, Georgescu, Philip Morefield, Britta Bierwagen and Christopher Weaver – all of the U.S. Environmental Protection Agency – examined how these technologies fare across different geographies and climates of the United States (http://www.pnas.org/content/early/2014/02/04/1322280111.abstract).

“This is the first time all of these approaches have been examined across various climates and geographies,” said Georgescu. “We looked at each adaptation strategy and their impacts across all seasons, and we quantified consequences that extend to hydrology (rainfall), climate and energy. We found geography matters,” he said.

Specifically, what works in California’s Central Valley, such as cool roofs, does not necessarily provide the same benefits to other regions of the country, like Florida, Georgescu explained. Assessing consequences that extend beyond near surface temperatures, such as rainfall and energy demand, reveals important tradeoffs that are oftentimes unaccounted for.

Cool roofs are a good example. In an effort to reflect incoming solar radiation, and therefore cool buildings and lessen energy demand during summer, painting one’s roof white has been proposed as an effective strategy. Cool roofs have been found to be particularly effective for certain areas during summertime.

However, during winter, these same urban adaptation strategies, when deployed in northerly locations, further cool the environment, and consequently require additional heating to maintain comfort levels. This is an important seasonal contrast between cool roofs (i.e. highly reflective) and green roofs (i.e. highly transpiring). While green roofs do not cool the environment as much during summer, they also do not compromise summertime energy savings with additional energy demand during winter.

“The energy savings gained during the summer season, for some regions, is nearly entirely lost during the winter season,” Georgescu said.

In Florida, and to a lesser extent southwestern states, there is a very different effect caused by cool roofs.

“In Florida, our simulations indicate a significant reduction in precipitation," he said. "The deployment of cool roofs results in a 2 to 4 millimeter per day reduction in rainfall, a considerable amount (nearly 50 percent) that will have implications for water availability, reduced stream flow and negative consequences for ecosystems. For Florida, cool roofs may not be the optimal way to battle the urban heat island because of these unintended consequences.”

Georgescu said the researchers did not intend to rate urban adaptation technologies as much as to shed light on each technology’s advantages and disadvantages.

“We simply wanted to get all of the technologies on a level playing field and draw out the issues associated with each one, across place and across time.”

Overall, the researchers suggest that judicious planning and design choices should be considered in trying to counteract rising temperatures caused by urban sprawl and greenhouse gases. They add that “urban-induced climate change depends on specific geographic factors that must be assessed when choosing optimal approaches, as opposed to one-size-fits-all solutions.”

This research was supported by the National Science Foundation under a Water Sustainability and Climate grant with Georgescu as principal investigator.

Throughout the month of March, ASU alumni across the nation will be participating in volunteer projects in their local communities as part of ASU Cares, a service initiative that encourages civic involvement among Sun Devils.

Arizona State University alumni across the nation will be participating throughout the month of March in volunteer projects in their local communities that range from helping with city park cleanups to sorting food bank donations. The volunteerism is a part of ASU Cares, a service initiative that encourages civic involvement among Sun Devils.

More than a dozen alumni chapters from San Diego to Washington, D.C., will participate in ASU Cares projects this year. Here is a brief overview of the planned activities. 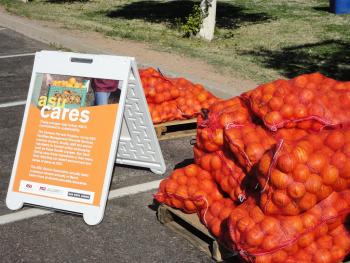 • Tempe, Ariz.: Assisting in the ASU Tempe campus annual citrus harvest, March 1 (Update, 4 p.m. Feb. 28: Due to the inclement weather, the March 1 ASU Cares event at the Tempe campus – the orange harvest – has been cancelled. We apologize for the inconvenience.)

To register for any of the above events, or for more information about ASU Cares, visit https://alumni.asu.edu/volunteer/asu-cares.