While college enrollments nationwide may have slowed in recent years, Arizona State University continues to draw record numbers of academically qualified students who are eager to learn and embark on their journey to a better life. 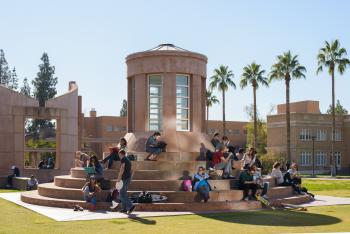 As the fall 2014 semester gets under way Aug. 21, the university anticipates an enrollment of more than 82,000 undergraduate and graduate students – a new record for the number of students enrolled and a nearly 8 percent increase from last year. Increases also are seen in the number of transfer, international and veteran and veteran-dependent students, and the student body is the most diverse ever.

“Students are choosing ASU because they know we are the right choice to help open their eyes to a new world filled with possibilities," said Kent Hopkins, ASU vice provost for enrollment services. "They have come here to work hard, and we are committed to teaching, guiding and mentoring them along the way. The Sun Devil family grows stronger every year and we are looking forward to seeing what our students envision and accomplish.”

Getting ready to start the school year is Preston Adcock, from Glendale, Arizona, a junior life sciences major in the New College of Interdisciplinary Arts and Sciences and a Barrett Honors student. He has his dream set on going to medical school and working as an orthopedic surgeon or in emergency medicine. He is working in ASU professor Carl Wagner’s organic chemistry lab.

“I like New College and West campus because it’s small enough to make friends on campus, whether you live on or off campus,” Adcock said. “The professors are fantastic.”

Freshman enrollment this year grew to more than 11,000. Applications received were more than 46,000, a 25 percent increase over the previous academic year. The fall 2014 freshman class is an academically strong group, with an average high school GPA of 3.4 and average SAT score of 1113. More than half, 54 percent, are New American University Scholars at the Dean, Provost and President Scholarship levels, the most prestigious scholarships for first-time freshmen.

Transfer enrollment has grown to more than 8,800 – up nearly 13 percent from fall 2013. The transfer class is academically strong, with an average 3.1 transfer GPA.

Jonathan Williams transferred to ASU from Glendale Community College in Glendale (metro Los Angeles), California. He is currently studying communications but plans to switch to journalism to pursue his career goal of becoming a sports journalist. He learned about the Walter Cronkite School of Journalism and Mass Communication from friends at a USC football game and decided to apply because “it’s better than the state journalism schools in California.” He’ll be working as a news reporter at the State Press this semester.

"I'm looking forward to the resources at a major research university and delving into writing and photography as part of my job at the State Press,” Williams said. "For me, writing is a passion, and I want to be a journalist because I want to be able to write about what's important and going on in the world, and keep people informed."

Viswajith Hanasoge Nataraja, from Bangalore, India, is pursuing his master’s degree in mechanical engineering at the Ira A. Fulton Schools of Engineering, and his area of interest is fluid mechanics and energy. He is a student worker in the University Sustainability Practices office, is actively involved in the Zero Waste at ASU initiative and is vice president of the Indian Student Association at ASU.

“I spoke to many friends here in the U.S. and in India, and to my lecturers in India, and their top recommendation was ASU because of its infrastructure, attention to detail and quality of faculty. It also has excellent research facilities,” he said. “I enjoy being a part of ASU’s sustainability efforts, and think that this will also give me an edge in my professional skill set.”

Other milestones for the new academic year include:

• the most diverse student body ever – 34 percent from underrepresented groups

• a 25 percent increase in overall enrollment for veterans and veteran dependents, with a 62 percent growth in new graduate enrollment since last year

Patrick Harris, a senior airman in the Arizona National Guard out of Tucson, Arizona, is majoring in music education with a minor in youth services leadership. A sophomore from Newport News, Virginia, who served in the Air Force for four-and-a-half years, he found through research that ASU is one of the top schools for supporting military veterans and for music education.

"The experience at ASU has been getting even better, especially as I take advantage of the opportunities to get involved in activities and organizations. I'm part of the Sigma Alpha Lambda fraternity, and am involved with the marching band at Marco de Niza High School in Tempe, Scottsdale and Mesa Community Colleges' bands, and Sonic Brass Band,” said Harris. "I've always wanted to teach music, and knew that I needed a degree to do so. I wanted to put in the work to achieve my dream."

Arizona State University is accepting registrations this month for students and families to participate in the Future Sun Devil Families program.

Arizona State University is accepting registrations this month for students and families to participate in the Future Sun Devil Families program. The program guides students and parents through the college preparation process at no cost.

More than 350 Arizona students and their families participated in in the inaugural 9th grade program last year. Classes are taught at local high schools across the Phoenix area. The goal of ASU’s Future Sun Devil Families program is to arm more Arizona students and families with the knowledge they will need to enroll and succeed at a university.

During the five-week sessions, students and their families learn what high school classes are needed for university admission, good study techniques and success tips from current college students, how to create a college portfolio and how to apply for scholarships. Interactive activities guide students and families through the following topics:

• identifying themselves as a college-bound student

• how to make college affordable using scholarships and grants

• taking the right classes in high school to prepare for college

• understanding and equipping themselves for college entrance exams

• how and when to apply for college and for financial aid

Participating schools and start dates
(classes are held from 6 to 8 p.m.)

During its first year, Future Sun Devil Families offered the curriculum to 9th grade students and their parents, with plans to add additional grades each year. This year, both 9th and 10th grade curriculum is being offered. Students and at least one parent or adult who supports their goal of acquiring a university education are encouraged to attend the workshops at local high schools.

“Future Sun Devil Families illustrates ASU and President Crow's vision to measure the success of our university not by who we exclude, but by who we include and how they succeed,” said Sylvia Symonds, assistant vice president of educational outreach at ASU.

Future Sun Devil Families workshops are taught in English and Spanish, take place during the academic year and are available at no cost to families. Workshops are designed to guide students and parents through the college preparation process in an interactive, co-learning environment.

For more information and to register, visit: asu.edu/futuresundevils.