Brett Hunt has a noble vision.

He wants people to have a greater appreciation for public service. 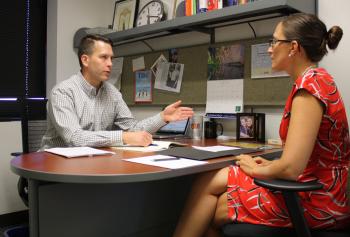 “I think it is really important for our country that we support those that choose to serve, whether that be in the Peace Corps, AmeriCorps or in their tribes, schools or churches, in the same way that we support military service members,” said Hunt, who is the founding executive director for ASU’s newly formed Public Service Academy in the College of Public Service and Community Solutions.

“It is not a question of which job is harder or more of a sacrifice but rather the fact that they have chosen to serve something much larger than themselves. Whether it’s in the government, private, non-profit or military sectors, everyone has the potential to positively impact our communities through service. Because, when people do make that decision, they are making us stronger as a nation.”

Hunt will lead the first undergraduate program in the nation to integrate cross-sector and civilian-military experiences to develop collaborative leaders of character. The academy, which starts its first cohort in August, will enroll 100 aspiring leaders from the around world each fall. Hunt expects big things from these students.

“The traditional track in the past for most college students has been to study, graduate and get a job,” Hunt said. “This generation seems more focused on moving the needle on social good rather than making a ton of money and being secure in their jobs. That gives me hope for the world and particularly the tough social, cultural and economic challenges we face.”

The program has two tracks: Reserve Officer Training Corps, the existing university-based program to commission officers into the U.S. Armed Forces, and the Next Generation Service Corps, a new program for service-oriented students from all majors to become civilian service leaders.

Hunt has had both feet in the military and public service sector throughout his career. After graduating the University of Colorado in 2002 with a degree in geography, he served four years as a captain in the U.S. Army, completing a tour in Kuwait and Iraq. Following his military career, Hunt served as a Foreign Service officer for the U.S. Department of State in Washington D.C. and as vice consul in Guadalajara from 2006 to 2008. He has also served as a consultant, most recently with Strategies 360, and has been active as a campaign adviser on issues relating to agriculture, veterans and immigration.

“Brett is an ideal leader for the Public Service Academy,” said Jonathan Koppell, dean of the College of Public Service and Community Solutions, which will host the academy. “His experience bridges the public, private and military sectors and exemplifies the kind of leaders we hope the academy produces.”

The four-year Next Generation Service Corps experience includes a set of seven leadership courses taken throughout a student’s university career, as well as a series of summer internships in nonprofit, government and private organizations. The program offers annual retreats, service opportunities and shared experiences with ROTC cadets.

“Our graduates will come out of the academy armed with leadership and cross-sector skills and be able to navigate all of the different hierarchies,” Hunt said. “Make no mistake about it, we’re looking at nothing short of changing the world.”

Out of this world: Space instrument marks beginning of new era for ASU

Arizona State University's first all in-house designed, built and tested instrument is set to be delivered to NASA, opening a new world to faculty, researchers and students.

Out of this world: Space instrument marks beginning of new era for ASU

When Phil Christensen loads the OTES instrument into its secure shipping container, he admits he’ll have some mixed emotions.

After all, the microwave-oven-sized instrument represents more than three years of his and his colleague’s work. It has been a major part of his life during that time and he has used the experience as leverage for more and greater things. But first comes goodbye. 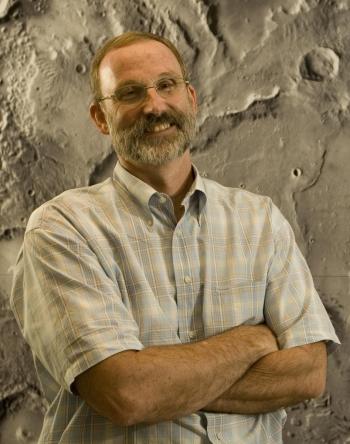 “It’s like having kids go off to college, you are very proud of them and you are happy. But it’s a sad moment,” Christensen said of sending OTES off to Colorado later this week, where it will be mated to its spacecraft.

“What is really strange is at launch,” said the Regents' Professor in Arizona State University’s School of Earth and Space Exploration. “You are sitting there in Florida and there is all of this commotion and the rocket takes off and it literally disappears over the horizon. It’s like, man, that thing is not coming back. It’s really gone.”

In September 2016, OTES (for OSIRIS-REx Thermal Emission Spectrometer) will take off from Cape Canaveral and head to the asteroid 101955 Bennu, a primitive rock that has undergone little change since it formed early in the solar system’s history.

The goal of the OSIRIS-REx mission (short for Origins Spectral Interpretation Resource Identification Security Regolith Explorer) is to inspect Bennu and bring back a sample of it.

OTES, one of six instruments on the OSIRIS-REx spacecraft, will play a key role in the mission. During its rendezvous, it will use long-wavelength infrared light to map the asteroid’s minerals, which will help mission scientists select where to collect the sample. The spacecraft will approach the asteroid and touch it briefly collecting at least 60 grams of dust, soil and rubble from its surface. It will return the sample to Earth via a separable return capsule and then be available to survey other asteroids, but not collect samples from them.

Just as returning a sample from an asteroid is a first for NASA, OTES is a first for ASU. It is the first NASA-certified designed, built and tested instrument on the Tempe campus. All of the work on OTES was done in the cleanrooms on the first floor of ASU’s Interdisciplinary Science & Technology Building IV (ISTB4).

For Christensen, who has built five other instruments for NASA missions, OTES marks the beginning of an era for ASU, elevating the university to among a handful of universities that can perform these functions according to NASA guidelines.

Having this capability “allows us to become really a magnet for the best students who want to do this kind of spaceflight work, and we can give them real experience with it,” said Lindy Elkins-Tanton, director of the School of Earth and Space Exploration. “We are no longer just doing theory and traveling to Jet Propulsion Laboratory or the Applied Physics Laboratory to watch an instrument being built. Students can come here to do it themselves. It is a very substantive way of integrating our science with engineering.”

To build a NASA instrument at ASU first meant having to convince the space agency it could be done and done right. Being able to win over NASA’s confidence isn’t easy and cannot be understated, said Jim Bell, a professor in the School of Earth and Space Exploration. The opportunity to do so doesn’t come often.

“This is a hard NASA hurdle to overcome,” said Bell, who has started work on a project to build a zoom camera system, Mastcam-Z, which will serve as the eyes of the Mars 2020 Rover. “NASA’s attitude is if we haven’t tried this before then we don’t want to do it. However, sometimes the door opens just a bit and Phil took advantage of that opportunity to its fullest with OTES.”

With five NASA instruments under his belt, all on schedule and under budget, Christensen said, he had a good reputation, but still needed to convince those at NASA that ASU was capable of doing the work.

He did that by first explaining he was going to build, basically, the same instrument as last time. Christensen then hired several key people who actually built that instrument. As they were building OTES, he talked NASA into providing a thermal vacuum chamber in which the instrument could be tested in space-like conditions. That chamber now resides in a cleanroom in ISTB4.

He is now negotiating with NASA to leave the test chamber for testing future ASU-built instruments and missions.

“He is a pathfinder for the rest of us,” Bell said. “We can submit a proposal and include having it built here based on our previous experience, and we can tell them this instrument will cost a third as much because we are doing all of it here.”

Currently, the school’s faculty have submitted three proposals for full NASA Discovery missions. Each is for $450 million. Elkins-Tanton wants to send a mission to an all-metal asteroid called Psyche; Eric Asphaug, a professor is the School of Earth and Space Exploration, wants to do a cat scan of a comet nucleus; and Bell has a proposal in for a space telescope that would be parked near Earth’s moon and focused on the outer solar system.

ASU also is involved in eight other Discovery mission proposals currently in to NASA, which will decide later this year which of the 28 total will receive funds for further study. Many of these proposals include provisions for instruments to be built and tested at ASU.

The next instrument planned for construction at ASU is Christensen’s E-THEMIS instrument that will go to Europa, a moon orbiting Jupiter.

NASA’s recently announced robotic mission will investigate whether conditions suitable for life exist at Europa, which appears to have a hard outer shell and is thought to have an enormous body of water under that shell. E-THEMIS (for Europa Thermal Emission Imaging System) will scan the surface of Europa at high resolution for warm spots, which could be places where the ice shell has become thin.

“It is a more complicated instrument, it is a flagship mission, it is going to get a lot more attention from NASA and if we didn’t have the experience with OTES, I think we would’ve had a hard time convincing NASA that we could do it,” Christensen said. “But being able to point to something and saying, ‘Trust me, we can do this,’ that really helped.”

Bell says he would like the Mastcam-Z camera for the Mars 2020 Rover tested in the thermal vacuum chamber at ISTB4.

Christensen, Bell and Elkins-Tanton all point to ISTB4 as a big reason why ASU can now build these instruments on campus. The new lab space, the cleanrooms, the equipment and all of the amenities of the facility have contributed to the success of landing these instruments and missions.

“In terms of technology, we now have the people, the processes and the infrastructure in place to go out and say we can build really complex NASA – and anybody else for that matter – space flight missions,” Christensen said. “We have now joined an elite group of universities that can do that. I can’t see any reason why we can’t do this for the next 50 years.”