Perhaps no other living poet other than Maya Angelou shares the same respect and popularity as Nikki Giovanni.

As a poet, writer, social commentator, activist and educator, Giovanni has brought the eyes of the world upon her through her outspokenness, writing and lectures. One of the most widely-read American poets in the last three decades, Giovanni remains as determined and committed as ever to the fight for civil rights and equality. 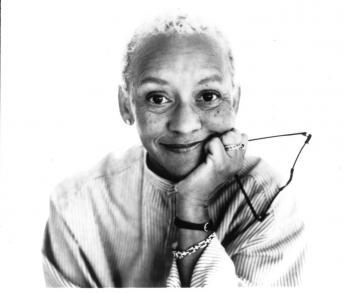 ASU’s Project Humanities is hosting “An Evening of Poetry and Conversation with Nikki Giovanni” as part of its spring 2014 kickoff. The event starts at 6:30 p.m., Feb. 13 at the Mesa Arts Center, 1 E. Main St., Mesa. Admission is free and open to the public.

Giovanni spoke to ASU in the News from her office at Virginia Tech in Blacksburg, Va., where she is a University Distinguished Professor of English. As one of the country’s foremost “truth-tellers,” Giovanni freely spoke her mind in this exclusive interview.

Q: There are many different art forms – music, painting, literature, acting and even standup comedy. What is particularly powerful about poetry?

NG: Poetry is, in all fairness to all other art forms, the basics. If you think about music, music is poetry with an opening and verse. But you mostly remember songs and music because of the rhythm. Of course, there are exceptions like Marvin Gaye’s “What’s Going On?” I have a very smart friend who’s a mathematician and sends things into space. I recently joked with him, “Don’t you feel you owe a lot to us poets?" He said, “Why’s that?” I said, “Because it was poets who invented math … math didn’t invent poetry.” Oh, he got so upset!

Q: The civil rights and black power movements inspired your early work and poetry. How do you view racism today as opposed to say 50 years ago?

NG: It would be hard to say there’s no racism in today’s world, but clearly it’s no longer acceptable to lynch people anymore. White people just don’t get in their dump trucks and go and burn the black community down. That is gone. However, policemen are still shooting people for no reason the same as private citizens, who are also shooting people for no particular reason.

Q: In light of the recent shooting at a Maryland mall, and the fact that you taught Seung-Hui Cho, the Virginia Tech student who killed 37 people and wounded 17 others in 2007, it seems as if random shootings are almost a weekly occurrence in our country.

Q: I’m surprised to hear you say this given that you wrote a poem for President Obama’s 2009 inauguration.

NG: It does annoy me, and I’m not trying to pick on President Obama, that people want to compare him to Dr. King. There’s nothing about Obama that’s like Dr. King. Dr. King was a courageous man who raised his voice for the world and he knew there could be a heavy price. The heaviest price Mr. Obama could have paid was that he didn’t get re-elected.

Q: In the past, particularly in the 1960s, there was no shortage of political, civic and moral leaders. Who are our leaders today?

NG: That’s the problem now isn’t it? If we didn’t have Jay-Z, Sean Combs, Kanye West or the rappers, who else is speaking out? By the way, I think there’s something wrong when Kanye West is more courageous than the president.

Q: ASU’s Project Humanities is hosting “An Evening of Poetry and Conversation with Nikki Giovanni” at the Mesa Arts Center on Feb. 13. What is your key message going to be?

NG: Well, first of all, I love people. We all need to improve on liking each other. I’m a big fan of gay marriage and civil rights. If America is to continue being America, we have to look like it. That means we have to be inclusive of everyone – black, brown, red, yellow and white. We have to make sure we include everybody who wants to be included. America has to consciously look like America. In the end, it makes us better people.

Q: Is there a particular takeaway you want people to get that night?

NG: I’ve been shying away from takeaways lately. I’m not a leader. I’m just a poet. But I hope what people will enjoy is the fact that I’m a really good thinker. I’m also a bit of a wicked thinker. In light of the holidays, don’t you think the dumbest idea on earth is The Little Drummer Boy? Who in their right mind would go to a woman who just had a baby with a damn drum that you beat on? Can you imagine? Mary probably grimaced and asked Joseph, “When is this fool going to leave? I’ve got to sleep…” I like it when everyone, especially kids, start to think. I want to encourage the youth of today and hope it will spark someone to take us to someplace in 2050. Maybe it will be the kid who invents something crazy and wonderful, and change all of our lives.

Q: You have a lot of exposure to our future leaders of tomorrow. Do they have the same depth as the students of the ‘60s?

NG: It’s a different kind of depth. We had a different challenge in the 1960s because our mission was very clear: racial discrimination. Today’s youth are facing global challenges that are far more complex and wider in scope. Let me say this, too: I like our kids. I have no question as I grow older, and I am already old… but if I live another 20 years on this earth I feel that I am very safe in the arms of this generation. I think they’re a phenomenal group. The problem is people want them to be “us” and they’re not going to be “us.” They’re going to be a wonderful “them.”

A telescope viewing of Jupiter and its moons will be the main attraction as the annual Astronomy Open House returns to the West campus on Feb. 20.

A telescope viewing of Jupiter and its moons will be the main attraction as the annual Astronomy Open House returns to Arizona State University’s West campus, 4701 W. Thunderbird Road, on Thursday, Feb. 20. Hosted by New College of Interdisciplinary Arts and Sciences faculty member Paul Schmidtke, the celestial sightseeing will run from 7 to 9 p.m.

The popular event is held east of the Herberger Young Scholars Academy (FABNX building) on the east side of campus. Parking is available in Lot 12 (the main visitor lot off University Way North) or in Lot 17 (a pay-by-space lot). Visitor parking costs $2 per hour.

“We’ve been hosting the Astronomy Open House at the West campus at least once each semester since 1997,” said Schmidtke, an astronomer with professional interests in the areas of double-star and X-ray astronomy. “For many who join us, it is the first chance to explore the night sky with a telescope. Jupiter is in excellent position for viewing this semester.”

The event is free. Several types of telescopes will be available, including some provided by members of the Phoenix Astronomical Society, which is once again supporting the activities.

“This is a wonderful opportunity for community members to come to the West campus and peek through a telescope at what this desert sky has to offer,” said Schmidtke, who teaches astronomy classes at the West campus. “People are so fascinated with the heavens because observing the sky is one activity that binds everyone together. Some people simply appreciate the beauty, while others want to know the details of how things work.”

For more information, see http://www.public.asu.edu/~atpcs/atpcs/AOHSpring2014.jpg or contact Schmidtke at paul.schmidtke@asu.edu.