President of CBS News to give keynote at Cronkite School graduation

The announcement comes the day after the 50th anniversary of Cronkite’s first appearance as anchor of the CBS Evening News.

“It is a tremendous gift to our graduating students to be able to hear from one of today’s most important journalism leaders, and it is particularly appropriate as both Walter’s network and Walter’s school celebrate his 50th anniversary,” said Christopher Callahan, dean of the Cronkite School.

Cronkite served as anchor and managing editor of the network’s nightly newscast from April 16, 1962, to March 6, 1981. Three years later, the journalism program at ASU was named in his honor. Over the following quarter-century, Cronkite made annual visits to the school, meeting with students, talking with faculty and personally bestowing the Walter Cronkite Award for Excellence in Journalism on a journalism luminary. The first Cronkite Award winners were CBS founder William Paley and former CBS President Frank Stanton in 1984.

Cronkite students have finished first nationally in the Society of Professional Journalists’ Mark of Excellence competition for six consecutive years and have the best record in the Hearst Journalism Awards over that time.

A New York native, Rhodes started his journalism career in 1996 as a production assistant at Fox News Channel and rose to vice president of news. During his 12 years at Fox, he led the political news team, edited international coverage of global hot spots such as Afghanistan and Iraq and directed coverage of Hurricane Katrina and other major events. He was a Fox News Channel assignment manager in New York on the morning of Sept. 11, 2001.

In November 2008, the Rice University graduate joined Bloomberg’s multimedia group as head of U.S. television. He was responsible for programming, development, editorial, newsgathering, production and operations.

Rhodes will deliver his convocation address on May 4 at Grady Gammage Auditorium, a Frank Lloyd Wright-designed venue on ASU’s Tempe campus.

Four Valley professionals chose X-Scape from among the five proposals submitted by teams composed of students from the ASU School of Art and The Design School and at least one other of the Herberger Institute’s six schools. 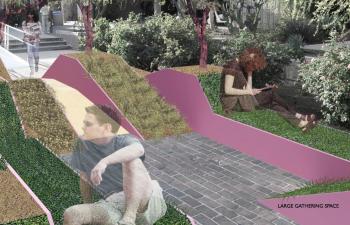 This year’s winning design will be installed on Neeb Plaza, located between the School of Art and The Design School, to create a multi-level and multi-purpose seating, lounging and gathering spot with trees providing shade and natural plantings, combined with an artificial turf to create an inviting and comfortable place for the campus community.

They pitched their design to the judges as one that would encourage casual use and conversation, as well as serve as an open-air staging area for performances, readings and other events.

For the last three years, teams of students working with faculty advisors have developed proposals to enliven the otherwise underutilized Neeb Plaza, to make it a vital gathering space for the ASU Tempe campus community.

“The quality of the presentations and sophistication of the projects has increased significantly each year,” Jenik said.  "We were particularly pleased that teams this year were comprised of students from every school in the Herberger Institute."

The winning proposal was determined by a combination of a popular vote of ASU students, faculty and staff, and the panel of professional jurors. The jurors this year were architect Will Bruder; director of the City of Scottsdale Public Art, Valerie Vadala Homer; author, performer and Scottsdale Museum of Contemporary Art Lounge Coordinator Tania Katan, and Paul Scott of the structural engineering firm Caruso Turley Scott.

The jurors said that they were impressed with the high quality of all of the proposals, but voted in the end for “X-Scape” citing its integration with the site and its ability to be adapted to create temporary “pocket parks” in a wide variety of locations throughout the Phoenix area.

“[X-Scape] has the potential of making a major contribution to the Valley's exciting conversation about temporary uses of empty lots,” said Bruder, adding that it will be “a testing ground for the rethinking of how sustainable reuse of the urban landscape can enrich our communities.”

The team X-Factor – Lauren Lochry, Jeff Gillway and Ernesto Lopez from The Design School, Mary Klacza and Leon Nash from the School of Art, and Collette Mabingani from the School of Music – were the winners of the popular vote and were named runners-up for their proposal, “Emitting Frequencies,” a modular performance pavilion.

“X-Scape” will be installed at the start of the fall semester, replacing last year’s winner titled “Peritonium.”   “It has been exciting to see the space come to life with such a structurally beautiful piece. As a result of the team’s vision and hard work, X-square has become an iconic and well-utilized part of the campus this academic year,”
said Jenik.  Students Ryan Martindale, Erica MacKenzie, Ben Partridge, Anna Christy, Courtney Larsen, Josh Gallagher, Kyle Fiano, and Erin Giordano created last year’s X-Square winner that will be disassembled in mid-May and moved to a new location in Fountain Hills.

For more information about the annual competition visit herbergerinstitute.asu.edu/institute/initiatives/xsquare.php.