Arizona State University’s Polytechnic campus has a 3-D printing lab, flight simulators and people who study the ability of algae to power society. 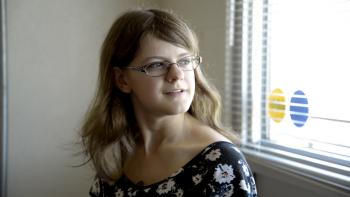 Elizabeth Raney from San Tan Valley, Arizona, is an 18-year-old freshman who will be studying education on the Polytechnic campus. Download Full Image

It also has an official dance called “The Whip,” which involves pushing a closed fist forward and swerving your body as you bring it back.

Berringer broke into the dance, originated by teen pop singer Stilento, with Megan Lymer while the two were representing the residential hall association table at the registration inside the Cooley Ballroom.

The duo even coaxed Sparky into the action, teaching the Sun Devil mascot the dance’s finer points.

“We have more of a sense of community here,” Lymer said of the Polytechnic campus. “We all get along and we know where to go if we need anything. It’s fun.”

The ASU Polytechnic campus will welcome 600 new freshman and move in approximately 1,300 students by this Thursday. Naturally, the campus still retains a down-home feel.

Maroon and gold balloons tied to sandwich boards sit on almost every corner, which are manned by staff members and volunteers who wave at every passing vehicle and personally greet pedestrians. That friendliness goes a long way for 18-year-old freshman Elizabeth Raney, who admits to being shy and reserved.

“I’m not a party student,” said Raney, who graduated from San Tan Valley’s Poston Butte High School. “I’m looking forward to learning the skills to do what I want, which is teaching. I’m also looking forward to a little independence.”

Raney was accompanied by her mother, Ange, and her 14-year-old sister, Sarah. Ange said that she hoped the Mary Lou Fulton Teachers College would help her daughter fulfill her dream of teaching kids with disabilities, but hinted that finding the freshman some new friends might not hurt.

“I would like to see her make some friends and participate,” Ange said. “She doesn’t need to befriend everybody on campus, but a tight-knit group would be nice.”

Maybe she’ll even learn The Whip.

Freshmen entering ASU's School of Criminology and Criminal Justice in downtown Phoenix spent their first day playing a life-size version of the popular board game "Clue," helping them build relationships that will be key to their success.

The killer was Miss Scarlet with the candlestick in the conservatory. 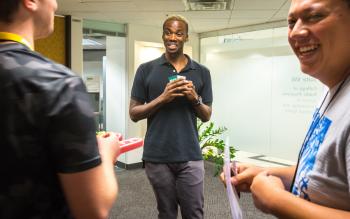 Freshmen Devon Lunemann, left, and Jesus Gonzalez crack up as adviser Juan Fortenberry, center, tells them they haven't got a clue, during the School of Criminology and Criminal Justice’s team building of the game "Clue." Download Full Image

Clemens was among two dozen freshmen in the School of Criminology and Criminal Justice who started their academic careers by sleuthing through a a life-size version of the board game “Clue.”

Teams of students wandered around the college’s offices in the University Center at Arizona State University's Downtown Phoenix campus, marking off the suspects, weapons and locations on a score sheet.

The clever game was a fun freshman ice-breaker. But it also planted the seeds for some of the most important relationships that students need to succeed.

This is the third year that newcomers to the college have played the game, which was the idea of Rachel La Vine, an academic success coordinator in the college.

“I know with freshmen there is that awkward tension, and I wanted a way to start off the year appropriately and by establishing roots with the school and each other,” she said.

“It’s a retention effort. Retention is a matter of making these connections.”

Hank Fradella, a professor and associate director of the school, emphasized that point to the freshmen before their game got under way.

“This is the advising staff,” he said, waving his arms around the room. “They’re more important than the professors. Get to know them.

“We have about 80 years of research on what makes college students succeed, and the number one thing is a good mentor.”

Fradella told the students to jump at the chance to work on important research with their professors.

“We work with police officers and parole officers and crime analysts to figure out what works and what doesn’t work,” he said. “If you want to know how the police do search and seizure or the use of force, we want to help you learn about that.”

Mikayla Petersen, a sophomore, works in the college and helped this year’s freshmen play the game by giving out clues in the “conservatory.”

She played “Clue” as a freshman last year.

“It was fun to beat the other teams and I met a lot of the friends I hang out with now,” she said.

Petersen said she grew up in a family of police officers and wants to eventually work for a federal agency, “I knew a lot of kids who went through a lot of hard times and I like to know that I can help them.”

You could say she’s giving them a clue to success.