Artwork from two Arizona State University photography students has been selected by ASU Health Services and the Herberger Institute School of Art photography program to be displayed at the newly renovated Health Services Palm Walk location on the Tempe campus.

After a competitive selection process, Lara Shipley and Michael Woodlee were commissioned to provide artwork that highlights the interconnectedness of art and health. The photographs capture scenes of beauty, time and nature from the state of Arizona and ASU. 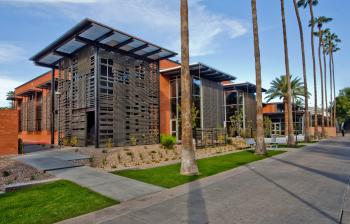 The installations are located on the first and second floors of ASU Health Services in the waiting areas, and will help to provide a calm and serene environment. The images will also help in reducing stress and promote healing of the body while patients wait to see a health care professional.

“The cultures and environments that surround us impact our health in myriad ways," says Adriene Jenik, director of the School of Art. "This partnership is inspired by this deeper understanding of health, and is the result of the combined vision of the Health Services director, the teamwork of ASU staff, and the immense talent of our students.”

Allan Markus, director of ASU Health Services, says, “As a medical educator and physician, I have taught and utilized the healing power of music and art with medical students and patients. These student art commissions create a win-win for our students who use health services and the students in the School of Art who created the artwork.”

The artist unveiling and showcase will be available for viewing beginning at 11 a.m., Aug. 27. This event is free of charge and open to ASU students, staff and faculty. Refreshments will be provided.

This year, "Ask A Biologist," an online science program designed to "excite and enrich" the learning experience of K-12 students, will easily pass 3 million visitors.

When he began "Ask A Biologist" in 1997, Chuck Kazilek thought he was at a crossroads in education: the place between formal education, like what is taught in a classroom, and informal education, like what is learned by oneself. What Kazilek, an assistant dean of technology, media and communications in Arizona State University’s College of Liberal Arts and Sciences, hadn’t realized at the time was that he was not the only one at the crossroads.

Apparently there are millions of people at that crossroads, most of who are thirsting for more science information. Kazilek has numbers to prove it. 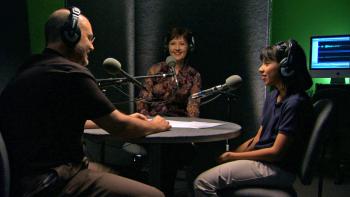 This year, "Ask A Biologist," an online science program designed to “excite and enrich” the learning experience of K-12 students, will easily pass 3 million visitors. The website, which also now has more than 6,000 pages (versus the one page Kazilek opened with 16 years ago), averages 10,000 visitors each day of the year.

“That is 40 to 60 percent growth over last year,” Kazilek says. “While we don’t compete with the numbers of, say Nickelodeon, it does show there is strong growth on the site.”

“Personally, I want more,” Kazilek adds. “I want 1 million viewers a month. We are moving that way.”

The website’s footprint of 3 million viewers per year includes more than 120,000 downloads of PDF content, annually. One feature that sets the program apart is that students, teachers and parents have direct access to working scientists at ASU. The website collection has been officially accessioned by National Science Digital Library and is rated 100 percent child safe. It also has been recognized with several awards, including the 2009 American Association for the Advancement of Science Prize for Online Resources in Education (SPORE) and Best of the Web from the Center for Digital Education.

The website is popular, Kazilek says, because it offers exploration for all ages. The site contains articles about current research, profiles of scientists (including companion podcast interviews), an image gallery, mystery images, coloring pages and interactive quizzes. In addition, "Ask A Biologist" features fun, flexible data sets that can be used in and out of the classroom by teachers and parents.

The website regularly adds new games and activities that can be used in the classroom or in informal learning environments. For example, Body Depot – developed with the Arizona Science Center – offers visitors a place to learn about bones, the immune system, genetics and proteins using games, videos and stories.

Kazilek says plans are to expand the scope of "Ask A Biologist" to "Ask An Expert," opening up several new areas of expertise offered online through the ASU portal. New channels are being developed and tested for energy, sustainability, engineering chemistry, physics and anthropology.

“We have found that there is a role at the intersection of informal and formal education,” Kazilek adds. “We do story-telling with a purpose, adding activities and experiments, and trying to meet next generation educational standards. We are blending formal and informal learning. It is very exciting.”