“I believe Phoenix will become one of the world’s greatest cities in which to invest, innovate and live,” said Parks, the writer and social entrepreneur whose community art project “26 Blocks” will serve as the launch point for an ASU panel discussion at the Renaissance Phoenix Downtown Hotel from 6:30-8:30 p.m. Sept. 17. The event kicks off the Arizona State University College of Letters and Sciences’ annual Humanities Lecture Series and is co-sponsored by ASU’s Project Humanities, "26 Blocks," and the Renaissance Phoenix Downtown Hotel. 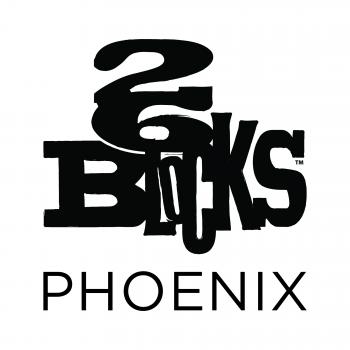 “Phoenix is on the rise in a big way. The amount of innovation going on here is astounding,” continued Parks, who finds the change in the downtown and midtown areas over the past decade especially energizing. “The growth is not hype. Our time in history is tangible and real.”

In 2010 Parks set to work on a community art project that would draw people in to celebrate and interact with the city from fresh perspectives — and would contribute to the sense of community among those who are passionate about Phoenix and its revitalization.

“I’m driven by wanting to pull people together and also want people to be inspired by their city,” he said.

Parks enlisted the collaboration of 26 photographers and 26 writers, who were paired off and challenged to showcase something about the past, present or imagined future of one of 26 randomly selected blocks in downtown Phoenix. Using the final picture and accompanying story for each city block, a sculptor then created yet another layer of meaning by creating 26 small wooden blocks inspired by each of the 26 displays.

For the Humanities Lecture Series, Parks has invited three of his collaborators and another photographer to discuss their craft, community art in general and lessons from “26 Blocks” specifically.

Ball, Baxter and Barnes all participated in the “26 Blocks” project.

Panelists will address questions such as: What does it take to make a community art project fly? Why are there so few women in the world of commercial photography? Why were there no black creatives in “26 Blocks”? What lessons from the Phoenix program should Parks consider as he works to establish parallel projects and identify creative talent in other cities?

The “26 Blocks” exhibit debuted in May 2010, toured extensively in downtown Phoenix for 14 months, and has been on display in the Renaissance Phoenix Downtown Hotel’s lower lobby since January. It will remain there for hotel guests and the general public to enjoy through January 2018.

“For Phoenix visitors, the free exhibit offers a glimpse into the heart and soul of the city, beyond what they might have time to experience, and may also inspire exploration of the blocks and spaces featured in the exhibit,” said College of Letters and Sciences’ principal lecturer Mirna Lattouf, who organizes the Humanities Lecture Series.

“For those of us who live here, the project invites us to make meaning of our own experiences with Phoenix and think about the history, energy and juxtapositions that make life here special,” she said.

When the exhibit opened at the hotel, a “Renaissance Bonus Block” was added to the installation, centered on the Renaissance Phoenix Downtown Hotel. It featured a new photographer, new writer and the same sculptor. Parks is now working with an illustrator to create postcard-size art that connects to each of the 26 blocks, adding them every few months to a large downtown Phoenix map on one wall of the exhibit.

Parks’ continued passion, indeed obsession, for this work might best be summed up in the words of “26 Blocks” contributing writer Walt Lockley, whose piece for Block Z of the project described an innate longing: “People need to know their cities. They gravitate to the center, looking for something to hold on to, an emotional center to wrap their arms and minds around.”

Other upcoming lectures in this series:

In October and November, the ASU’s Humanities Lecture Series will feature:

•Nov. 5, Robert Bjork, ASU Department of English:
“Epic of Beowulf of the Many Faces and Meanings”

The October and November lectures will be held on ASU’s Downtown Phoenix campus, in the Walter Cronkite School of Journalism and Mass Communication/KAET Channel 8 (CRONK), room 128. The lectures begin at 6:30 p.m. and are free and open to the public.

ASU Insight: Should the United States be the World’s Policeman?

On Thursday, September 10, The McCain Institute for International Leadership at Arizona State University hosted the debate at the Burke Theatre at the Navy Memorial, in Washington. The question brought forward was: “Should the United States be the World’s Policeman?”The debate centered upon the relative strengths and weaknesses of U.S. leadership in the world, and whether U.S. decision maker...

ASU Insight: Should the United States be the World’s Policeman?

On Thursday, September 10, The McCain Institute for International Leadership at Arizona State University hosted the debate at the Burke Theatre at the Navy Memorial, in Washington. The question brought forward was: “Should the United States be the World’s Policeman?” 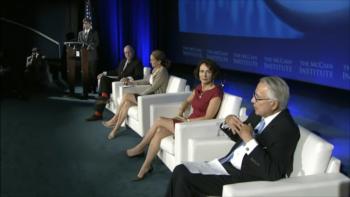 Should the United States be the World’s policeman? Download Full Image

The debate centered upon the relative strengths and weaknesses of U.S. leadership in the world, and whether U.S. decision makers should use the significant military, economic and diplomatic resources at their disposal to continue shaping and arbitrating events in the international system.

Richard Burt, Chairman of the National Interest Advisory Board

Arguments in favor of the United States being the world’s policeman:

Arguments against the United States being the world's policeman:

Thomas Donnelly advocated safeguarding the U.S.-lead liberal order and the values it entails. Mr. Donnelly argued that weakening U.S. leadership is a choice that will compromise this system.

Richard Burt did not challenge the notion of U.S. leadership itself. Instead, he argued that future policy should adhere to a tightly defined national interest. All policy should strictly reflect these national priorities. Ambassador Burt made the point that military force should be considered in conjunction with economic and political priorities.

Elizabeth Cobbs said the United States should aim to be part of a system in which it is not the only pillar guaranteeing order. Dr. Cobbs called for U.S. leadership to share the burden of spreading peace and security with its regional partners.