Arizona State University has opened a new veterans center on campus, named after one of its most renowned student athletes, Pat Tillman, who died serving his country in Afghanistan.

The Pat Tillman Veterans Center is a 3,340 square foot facility located in the lower level of the Memorial Union on the Tempe campus. 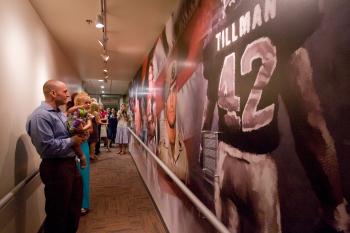 It will provide a single point of contact for ASU veterans and their dependents, bringing together academic and student support services to promote a smooth transition from the military, provide assistance for veterans benefits, deployments, information, and referrals, as well as a place where veterans can gather for study groups and social activities.

Master of Ceremonies for the official opening was Kent Hopkins, vice provost for enrollment management. He was joined by Betty Capaldi, executive vice president and provost, Michael McBride, assistance director of undergraduate admission and Pat Tillman’s  former academic advisor, and Jason Ohanian, veteran student in the W. P. Carey School of Business MBA program, all who joined together to cut the ceremonial ribbon.

Hopkins read comments from Pat’s wife, Marie, who was unable to attend.

“It is important for university campuses to acknowledge that the transition veterans experience when returning to school is unlike that of most students,” she stated. “They face unique challenges related to financial aid, adjusting to campus life, and face a general lack of understanding of their experience by their classmates. In addition to offering innovative academic support and resources, the Veterans Center will address these needs by providing a place where veterans can find a strong sense of community on campus.

“Today, Arizona State is not only honoring Pat, by opening the Pat Tillman Veterans Center,” she continued, “rather it is honoring all veterans and military families by ensuring they have direct access to the assistance and resources they need to achieve their personal, educational and career goals."

The university was named a “Military Friendly School” by GI jobs magazine for the last two years and was named one of the top 30 “Best for Vets: Colleges 2010” by the Military Times Edge magazine.

ASU also was chosen as one of the first eight institutions to be part of the VA’s pilot program, VetSuccess on Campus. Two VA staff, a vocational rehabilitation counselor and a Vet Center outreach coordinator are assigned and located on ASU’s campus to assist veterans with services such as vocational testing, career counseling, readjustment counseling, etc., to promote successful completion of educational and employment goals.

Student led veterans clubs have been organized on the Tempe and Polytechnic campuses to provide veterans with a voice on campus, a resource to guide veterans to available resources, and an opportunity for networking and outreach. In the spring of 2011, the ASU Alumni Association launched an ASU Alumni Veterans Chapter as part of a larger plan to support veterans on campus and promote more interaction between all veterans.

Guest lecturers will discuss, debate and analyze the issue of capital punishment in a forum-style setting at ASU's Downtown Phoenix campus.

Guest lecturers will discuss, debate and analyze the issue of capital punishment in a forum-style setting at ASU’s Downtown Phoenix campus.

“The Pros and Cons of Capital Punishment” will commence the fall 2011 Humanities Lecture Series, which is now in its fourth year. The forum, hosted by ASU’s School of Letters and Sciences and the Canon Leadership Program, starts at 6:30 p.m., Aug. 25, at the Nursing and Health Innovation Building Two, 550 N. Third St., Phoenix, Innovation Auditorium, room 110. 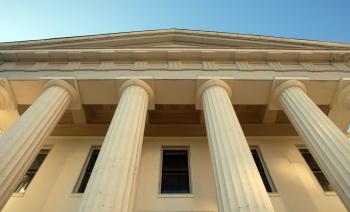 The lecture series is open to the general public and is free.

“The Humanities Lecture Series provides us with opportunities to analyze, discuss and interpret current events. We look forward to public discussions that help us understand and appreciate various points of view on political, social and cultural issues,” says Frederick C. Corey, director of ASU’s School of Letters and Sciences and dean of University College.

The School of Letters and Sciences provides students across ASU with the knowledge and skills to comprehend and effectively engage the changing world of the 21st century at local, national and global levels. Theory, creativity and applied learning are integrated as students build entrepreneurial opportunities both inside the university and in their communities.

Andrew Clemency, a public defender for the Maricopa County Attorney’s Office and adjunct associate in the School of Criminology and Criminal Justice, says capital punishment does not make economic or moral sense. He also said it’s a major burden on taxpayers.

“It costs vastly more money to execute criminals rather than to warehouse them at a state prison for the rest of their lives,” Clemency said. “Death penalty cases cost almost an average of $1 million and take about 10 to 20 years to appeal in state and federal systems. It’s really not a deterrent to crime, so why are we doing it? We’re doing it because our most base human impulse is revenge. Capital murder is the only punishment we extract in kind.”

Kent E. Cattani, chief counsel of the Criminal Appeals/Capital Litigation Section at the Arizona Attorney General’s Office, will represent the case for capital punishment. Cattani said while Arizona’s system is not perfect, his office has applied the state’s death penalty statute in a fair and just manner.

“Since 1993, Arizona has required the appointment of two highly qualified trial attorneys in every case in which the State notices its intent to seek the death penalty. We also provide experienced counsel to represent death-sentenced inmates in state appellate and post-conviction proceedings,” Cattani said. “We remain open to suggestions on how to improve the process, and as long as capital punishment remains the law in Arizona, we will continue to carry out the law as fairly as possible.”

Arizona has been carrying out death-penalty sentences since 1910 and suspended all cases from April 1962 to April 1992. The United States Supreme Court in 1972 held that the death penalty as it was administered violated the United States Constitution Eighth Amendment prohibition against cruel and unusual punishment and often was not guided in its discretion and was meted out in “arbitrary and capricious ways.”

The Arizona Legislature revised Arizona’s Death Penalty Statute and sentences became effective once again on May 1, 1979.

In 1992, the state executed its first death-row inmate in 29 years, Donald Harding, who was found guilty of murdering two men in a Tucson hotel. Harding died in Arizona’s gas chamber, an event that took 11 minutes and ultimately led to the state’s switch to lethal injection.