The Pac-12 Conference released its 2012 Men’s and Women’s Track and Field All-Academic teams on Monday and eight Sun Devils found their way to first-team honors and 18 were honored overall, Pac-12 Commissioner Larry Scott has announced. 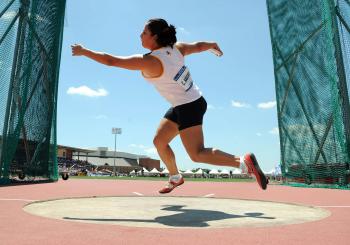 The men were led by senior John Kline, who graduated in May with a 4.03 GPA in Kinesiology.  Kline was honored with the ASU Alumni Outstanding Graduate Award and Mouer Award from the School of Nutrition.  Kline was also the lone Sun Devil on the All-Academic first-team lists to earn an All-America award, taking second-team honors for his work on the men’s 4x400-meter relay that finished 10th overall at the NCAA Championships this past weekend.

For Kline, it was his third consecutive first-team honor from the conference, having earned it the last two years as well.

Junior Nick Happe, who earned second-team All-America honors indoors in the mile, also posted a 4.09 GPA in Finance while redshirt sophomore steeplechaser Steven Schnieders earned first-team honors with a 3.82 GPA in Accountancy.  Happe was an honorable mention selection in 2011 while Schnieders was a first-team selection last year as well.

On the women’s side, graduate Cj Navarro was the top Sun Devil on the first-team list after posting a 4.08 GPA – graduate-work included – in Education Technology. Navarro scored for the Sun Devils in both the hammer and discus competition at the Pac-12 Championships and was just one spot away from qualifying for the NCAA finals in the discus competition.

Navaro earned her fourth Pac-12 honor with the selection, having been a first-team selection in 2010 and 2011 while being a second-team honoree during her redshirt freshman campaign.

Fellow thrower Alex Hartig also earned first-team honors with her 3.94 GPA in Accountancy.  The redshirt freshman was one of just two freshmen on the first team and was also a point-scorer for the Sun Devils in the shot put at the conference championships.

Junior Natasa Vulic rounded out ASU’s first-team selections with a 4.00 GPA in Pre-Physiology.

The Sun Devils posted two second-team honorees, both on the men’s side, in Nathan Estes and Derick Hinch.  Estes, a junior, posted a 3.59 GPA in Mechanical Engineering and scored for the Sun Devils in the shot put this year at the Pac-12 Championships while Hinch was one of the top newcomers in the conference in the pole vault, finishing third at the NCAA Championships and posting a 3.37 GPA in sociology as a junior college transfer.

To be selected for Academic All-Pac-12 honors, a student-athlete must carry a 3.0 or better grade point average, have completed at least one full academic year at their institution and be a starter or significant contributor to the team during the academic year.

Recent graduates from ASU's College of Technology and Innovation and their vertical wall-scaling invention have caught the attention of national electronics retailer Best Buy.

A group of seven recent graduates from ASU's College of Technology and Innovation (CTI) and their vertical wall-scaling invention recently caught the attention of national electronics retailer Best Buy.

Best Buy has featured them as part of its student innovators web series in this video. A shorter television commercial that includes inventors from other universities has been running nationally and throughout the NBA playoffs. 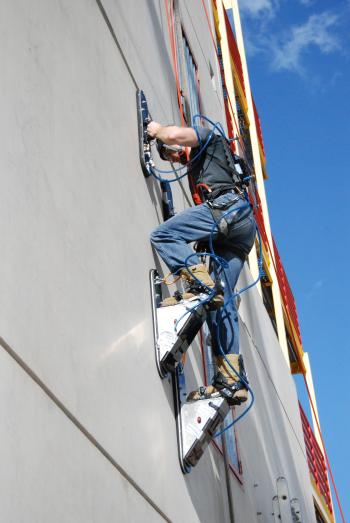 The former ASU students, all engineering graduates, created a vacuum-powered, one-man climbing system as part of a competition designed by the Air Force Research Laboratory. The device was built to allow a user to climb higher, faster and with less effort than current techniques, while also keeping one hand free for communications equipment. The one-man system had to carry the weight of a soldier wearing a 100-pound backpack and be modular enough to be transported between climbing sites.

The students and faculty mentors worked throughout the school year to research, design and develop a prototype, and then test the device before competing against 15 other schools from around the country at Wright State University’s Calamityville tactical laboratory in Ohio.

“We didn’t have any instructions or examples of how to build something like this – just a short list of parameters that the device had to accomplish,” said Kevin Scott, CTI graduate and the designated test climber for SM-7. “The biggest issue was adhesion to the wall, after that we had to reduce the metabolic impact on the soldier in order to make it more viable.”

The SM-7 is built on four positive displacement vacuum pumps that pull enough air out of the surface to create a pressure differential that can hold more than 300 pounds. Each vacuum is wired to a push button that toggles on to turn the suction on and off to release the air and allow the user to climb.

“The first time we tested it, we set up a safety line just to be sure but I never doubted for a second that it would work,” Scott said. “Once I got up there, I took a couple of steps and got in the flow of climbing. It was the most surreal feeling, to be climbing a vertical wall using a device that our team invented and built from scratch.”

The project was part of CTI’s iProjects program. The CTI mission and the idea behind iProjects is to connect students and the college with industry partners in order to create innovative solutions to real-world problems.

“We were challenged with finding a solution to a real problem that the Air Force and military personnel face everyday,” Scott said. “We had to use our hands and put engineering theory into practice to build something a soldier could rely on in the field. You can’t gain that experience from a textbook.”