A collaborative study involving researchers at Arizona State University, the University of Toronto, and the University of Cape Town found that human ancestors were making stone-tipped weapons 500,000 years ago at the South African archaeological site of Kathu Pan 1 – 200,000 years earlier than previously thought. This study, “Evidence for Early Hafted Hunting Technology,” is published in the Nov. 16 issue of the journal Science.

Attaching stone points to spears (known as “hafting”) was an important advance in hunting weaponry for early humans. Hafted tools require more effort and foreplanning to manufacture, but a sharp stone point on the end of a spear can increase its killing power. 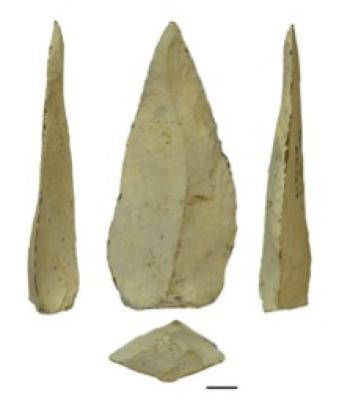 “There is a reason that modern bow-hunters tip their arrows with razor-sharp edges. These cutting tips are extremely lethal when compared to the effects from a sharpened stick. Early humans learned this fact earlier than previously thought,” said Benjamin Schoville, a coauthor of this study and doctoral student affiliated with the Institute of Human Origins, a research center of the College of Liberal Arts and Sciences at ASU.

Hafted spear tips are common in Stone Age archaeological sites after 300,000 years ago. This study shows that hafted spear tips were also used in the early Middle Pleistocene, a period associated with Homo heidelbergensis, the last common ancestor of Neandertals and modern humans.

“Rather than being invented twice, or by one group learning from the other, stone-tipped spear technology was in place much earlier,” said Schoville. "Although both Neandertals and humans used stone-tipped spears, this is the first evidence that this technology originated prior to or near the divergence of these two species."

“It now looks like some of the traits that we associate with modern humans and our nearest relatives can be traced further back in our lineage,” said Jayne Wilkins, lead author from the University of Toronto. “This changes the way we think about early human adaptations and capacities before the origin of our own species.”

Point function was determined by comparing wear on the ancient points to damage inflicted on modern experimental points used to spear a springbok carcass target with a calibrated crossbow. This method has been used effectively to study weaponry from more recent contexts in the Middle East and southern Africa.

“When points are used as spear tips, there is a lot of damage that forms at the tip of the point, and large distinctive fractures form. The damage on these ancient stone spear points is remarkably similar to those produced with our calibrated crossbow experiment, and we demonstrate they are not easily created from other processes,” said coauthor Kyle Brown, a skilled stone tool replicator with the University of Cape Town.

The points were recovered during 1979-1982 excavations by Peter Beaumont of the McGregor Museum, Kimberly, South Africa.

In 2010, a team directed by coauthor Michael Chazan from the University of Toronto reported that the point-bearing deposits at KP1 dated to around 500,000 years ago using optically stimulated luminescence and U-series/electron spin resonance methods. The dating analyses were carried out by Naomi Porat, Geological Survey of Israel, and Rainer Grün, Australian National University.

Funding for this research was provided by the Social Sciences and Humanities Research Council of Canada, the National Science Foundation, and the Hyde Family Foundation, and with important logistical support from the South African Heritage Resources Agency and the McGregor Museum.

The Institute of Human Origins is the leading research organization in the United States devoted to the science of human origins. Embedded within ASU’s School of Human Evolution and Social Change, the institute pursues a transdisciplinary strategy for field and analytical paleoanthropological research central to its 30-year-old founding mission – integrating social, earth, and life science approaches to the most important questions concerning the course, timing, and causes of human evolutionary change over deep time. The institute links to its research activities innovative public outreach programs that create timely, accurate information for education and lay communities.

'Unruly Voices' to Greek religion: what faculty are teaching this fall

ASU faculty use their own research as the jumping-off point for several unique class offerings from this fall.

'Unruly Voices' to Greek religion: what faculty are teaching this fall

Editor's Note: Teaching a class? Let us know about it. The following is the second installment of an ongoing look into some of the unique classes being taught at ASU. The series will resume next semester, just after the start of the Spring 2013 semester.

Beyond the basic introductory college courses, there are many unique classes offered to students each semester, by a diverse array of faculty who are all experts in their fields. Here, we take a look at some of the interesting course topics from the fall 2012 semester. 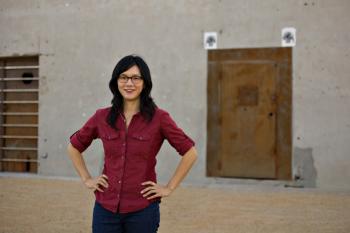 In the Greek world, religion was pervasive – virtually every activity had a religious dimension – and yet there are no holy books, only rudimentary religious organizations, and no confessions of faith. In Michael Tueller’s "Ancient Greek Religion" class, students take a closer look at this world very different than our own.

“With so many boundary markers removed, a student who learns about Greek religion discovers a great many more vantage points from which to examine the world, both ancient and modern,” explains Tueller. “In that way, it provides a valuable mind-opening experience even to those who will go on to careers quite unrelated to it.”

One of the highlights of the semester is when students get to learn how to sacrifice an ox. Tueller is quick to add, however, that the ox is actually a two-foot tall plush cow, “but it’s still a pretty bloody scene.”

“The overall course theme is defined, in part, by the “unruly voices” of Black women,” says Reyes. “These women were heralded by twentieth-century feminists [because they] were heroic in thinking and stepping outside of gender roles defined by a patriarchal society – they took dangerous risks and were imprisoned, murdered, whipped, or harassed in their resistance to prescribed gender expectations.”

The class covers the historical periods of pre-emancipation and Reconstruction through post-World War I and the era of the Harlem Renaissance.

“The course offers interdisciplinary readings that illustrate poignant cultural historical issues of slavery, marriage, and the quest for new freedoms,” explains Reyes. “Students are reminded that African American women embraced a certain moral, spiritual, and legal imperative influenced by slavery, the aftermath of Reconstruction, and the hope of new generations.”

At just 5,000 words, the Dao De Jing (Tao-te Ching) is one of the shortest religious books in the world. It is also the most widely translated, after the Christian Bible. In Stephen Bokenkamp’s class, students learn how different writers throughout the ages – in China, Europe, and the U.S. – interpreted this single text, making the course one that Bokenkamp describes to colleagues as “stealth hermeneutics.”

“We start with the earliest excavated manuscripts of the Dao De Jing, dating to about 300 BCE and read traditional Chinese Daoist, Buddhist, and Confucian interpretations – mostly in my own translation,” says Bokenkamp.  “Finally, we come to the earliest English translations and end with the English ‘translations’ by those who know no Chinese at all, Stephen Mitchell, Wayne Dyer, and Ursula LeGuin.”

In John Carlson’s "Religion, Violence & America" class, students think critically about concepts that have contributed in significant and varied ways to America’s history, national identity, and place in the world.

“Many people think of the United States as a religious nation. A good many others might describe it as a violent nation as well. Is there a connection?” Carlson asks. “And if so, what is the nature of the relationship between religion and violence in the American context?”

The topics covered by the course curriculum include “militant abolitionist John Brown’s fraught moral legacy for America, how the biblical story of the Amalekites has been used to stigmatize and persecute American Indians, Catholics, and Mormons, and how covenantal thinking among U.S. political leaders shaped the moral rhetoric of World War I and the Cold War,” says Carlson. Over the course of the semester, he encourages his students to understand and assess the domestic and international importance of various creeds, ideals, principles, and practices commonly associated with America.

“This course focuses on historic and contemporary constructs of Indigenous peoples in Hollywood films and video,” says Laura Tohe.

In the first half of the semester, students cover the rise of imagining Indians within the context of European Primitivism that led to the construct of the “Noble Savage” and various stereotypes of Indigenous peoples.

“Selected films include silent films, John Ford’s early westerns, and revisionist films, such as Little Big Man,” says Tohe. In the second half, contemporary Indigenous American filmmakers challenge those constructs through self-definition and cultural sovereignty in their films, including Smoke Signals and Whale Rider.

“By showing these parallel images, I hope students will come away with an educated perspective on how these films can be political, cultural, social, artistic, and entertaining,” explains Tohe.

Markus Cruse’s recent research on Haiti and the 2010 earthquake formed the framework for his course offering this semester, "Haiti: History and Culture."

“The course touches on many issues relevant to research and study at ASU, including human rights, sustainability, globalization, social engagement, borders and colonization, and transdisciplinarity,” Cruse says. “Haitian history and culture are important subjects for several reasons. It is one of the most extraordinary examples of cultural fusion in the world.”

Students cover a variety of topics in his class, from Haitian history and religious practice to art and literature, concluding with a discussion of how the country is recovering from the 2010 earthquake. “I enjoy teaching the class because it allows the students and me to explore fascinating topics, from revolution to sustainability to folklore.”

JUS 394 - Race, Space, and the Production of Inequality

Wendy Cheng considers her "Race, Space, and the Production of Inequality" a great opportunity for students to think critically about the relationship between race and space, and how this shows up in the everyday landscapes around us.

“We talk about how both ideas about space and practices related to land and property have been critical to establishing contemporary racial inequality and continuing segregation, and how these have affected different racial and ethnic groups in distinct ways,” she says.

Cheng’s favorite part of the class comes in the second half of the semester, when “students do group projects in which they go to sites in Maricopa County and write about them in relationship to course ideas.” Students compile their work into a blog, titled, A People’s Guide to Maricopa County.

“This is an opportunity for them to explore the local area and bring in their own expertise, and I've had students be really original and just uncover amazing sites and important histories that are virtually unknown,” Cheng says.

Herberger Institute for Design and the Arts University Employee