Denise L. Fleisch will exhibit oils on canvas, while members of the Oakwood Artist League show mixed-media works during the next show of the season at ASU Gammage.

The artwork will debut Oct. 12, and the exhibit runs through Nov. 28. 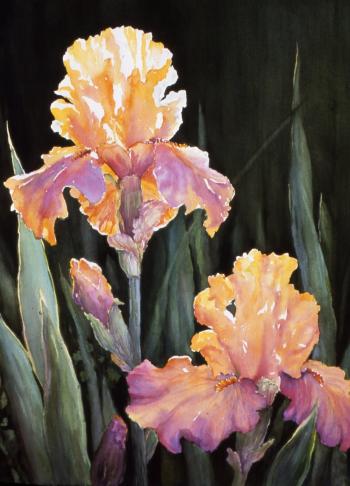 Fleisch, a Scottsdale resident, paints abstract pieces in a square, 36-by-36-inch format. “My artworks convey balance, color and passion,” she says. “I work both deliberately and unconsciously, employing traditional and innovative techniques to accomplish a sense of balance and depth.”

Oakwood Artists League is an organization for artists who have come from around the United States to reside in Sun Lakes, Arizona, drawn by the light, color and texture they find in the Valley of the Sun.

The members, who also are inspired by the architecture and countryside they have seen in their travels, their pets, families, hobbies and other experiences. They will exhibit a diverse and colorful variety of artwork, including pastels, pencil drawings, watercolors and acrylic and oil paintings.

OAL was founded in 1999 and holds educational workshops and a yearly fine-arts show.

Exhibit hours at ASU Gammage are 1 to 4 p.m. Mondays or by appointment. Due to rehearsals, event set-up, performances, special events and holidays, it is advisable to call (480) 965-6912 or (480) 965-0458 to ensure viewing hours, since they are subject to cancellation without notice. Appointments may be made by calling the same numbers.

Visitor parking is available at meters around the perimeter of ASU Gammage. Entrance is through the East Lobby Doors at the Box Office.

The Arizona State University Sports Hall of Fame will welcome 10 former student-athletes to its ranks, Oct. 1, at halftime of the ASU vs. Oregon State game.

The Arizona State University Sports Hall of Fame will welcome 10 former student-athletes to its ranks Saturday, October 1 at halftime of the ASU vs Oregon State game. 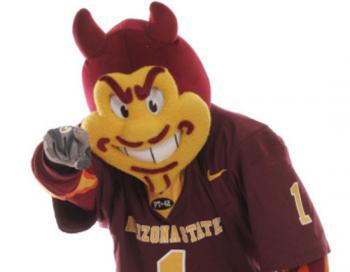 Adam Archuleta, Football / 1997-2000 Archuleta ranks fourth in school history with 54 stops behind the line of scrimmage. He recorded 330 tackles (202 solos) with 14 quarterback sacks, six fumble recoveries and five forced fumbles during his four year career. As a senior, Archuleta was named the Pac-10 Defensive Player of the Year and was a First-team All-Pac-10 Conference selection as a linebacker. He was also one of three finalists for the Dick Butkus award, which is given to the top linebacker in college football. As a senior, Archuleta started at outside linebacker and led the team with a career-high 127 tackles (93 solos), had four sacks and 15 stops for losses. He was a First-team All-America selection by The Sports Xchange and earned Second-team All-America from the Walter Camp Foundation. As a junior, he was named to First-team All-Pac-10 Conference and named team most valuable player. Archuleta started the final eleven games at outside linebacker and led the team with 111 tackles (59 solos) had five sacks and 21 stops for losses. He moved into the starting lineup as a sophomore at linebacker, playing in every game and finished with 75 tackles (39 solos), five sacks and 18 stops for losses. Archuleta played in every game during his freshman season as a reserve inside linebacker, recording 17 tackles (11 solos) while appearing mostly on special teams. He redshirted as a true freshman after making the team as a walk-on. The St. Louis Rams drafted Archuleta as the 20th overall selection in the 2001 NFL Draft. He spent his first five years in St. Louis, where he excelled in Lovie Smith's base defense.  Archuleta signed a five-year $7 million contract with the Rams, with a signing bonus of $3 million. In 2001, after playing in 13 games and starting 12 at strong safety, Archuleta was named to All-rookie teams by The Football News and Pro Football Weekly. He finished sixth on the Rams with 81 tackles (43 solo) and tied for second with seven tackles for loss while notching two sacks, five passes defended, two forced fumbles and one fumble recovery. After the 2005 season ended, he was one of the most sought after free agent safeties. The Redskins made him the highest paid safety in the history of the NFL by signing Archuleta to a six-year, $30 million contract on March 14, 2006. Archuleta started at strong safety for 7 of 16 games played with the Redskins, registering 50 tackles and one sack to go along with career-high 17 special teams tackles. He appeared in all 16 regular season contests for the third time in his career. On March 20, 2007, the Redskins traded him to the Chicago Bears for their sixth round draft pick in the 2007 NFL Draft. He played 15 games with only ten starts and he intercepted a pass, forced a fumble and recovered a fumble.

Mike Benjamin, Baseball / 1986-1987 Benjamin earned All-America and All-Pac-10 honors in 1987. He was one of five Sun Devils to hit above .300 in 1987 with a .327 average, 18 home runs and 55 runs batted in. Benjamin fielded a .950 clip, making just 19 errors in 383 chances in 1986. He played 13 seasons of Major League Baseball, the first seven of which he spent with the San Francisco Giants. He made his Major League debut for the Giants on July 7, 1989 and played there through the 1995 season. He spent 1996 with the Philadelphia Phillies before joining the Boston Red Sox in 1997. He played two seasons in Boston, playing in the 1998 American League Divisional Series, before finishing his career with the Pittsburgh Pirates. Following his pro career, Benjamin was a coach for the Chandler National Little League team that advanced to the Little League World Series in Williamsport, Pennsylvania. He returned to Arizona State as an Assistant Coach on Tim Esmay's staff.

Grace Park, Women's Golf / 1998-2000 Park was named Player of the Year and All-American her freshman year of 1998. That season she won the U.S. Women's Amateur plus the other two "amateur majors" of women's golf, the first golfer to win all three since Patty Berg in 1938. By the middle of 1999, Park had amassed 55 tournament wins in junior, collegiate and amateur competitions. Then she finished eighth as an amateur at the 1999 U.S. Women's Open and decided it was time to turn pro. Over the remainder of '99, Park won five of the 10 Futures Tour events she entered, led that tour in money, and earned her LPGA Tour card. Park's first win was at the 2000 Kathy Ireland Greens.com LPGA Classic. She won once each year from 2000 through 2003. In 2003, in addition to the one win, she also had five seconds, four thirds, and 19 top 10's. Park won twice in 2004, including her first major, the Kraft Nabisco Championship. Park's climbed up the money list eventually reaching 2nd in the world.

Townsend Saunders, Wrestling / 1989-1990 During his two years at ASU, Saunders was a two time Pac-10 champion and two time all-American with a career record of 77-9. In 1989, Saunders finished second at the national championships to earn his first all-American honors in a Sun Devil uniform. He moved up from the 142-weight class to the 150-weight class the next year, and he finished third at the national championships. Before coming to ASU, Saunders was a Division II national champion at Cal State Bakersfield. He went on to become one of ASU's most successful international wrestlers. Saunders was a two-time Olympian, competing in the 1992 and 1996 Olympics, and winning a silver medal in 1996. He was also a two-time gold medalist at the Pan American Games in 1991 and 1995, and he also won a gold medal in 1994 at the Goodwill Games. He later served as an Assistant Coach for the ASU wrestling team.

Marvel Smith, Football / 1997-1999 Named First-Team All-American by Football News as a senior in 1999. Smith was a Second-Team AP All-American and a Third-Team All-America selection by Sporting News that year. He earned First-Team All-Pac-10 honors in 1999 after receiving honorable mention in 1998. Smith started the final 31 games of his Sun Devil career at left tackle. He gave up just one sack in his final season at ASU. He was selected by the Pittsburgh Steelers in the second round (38th overall) of the 2000 NFL Draft. He played on the Steelers' team that won Super Bowl XL, and was named to the Pro Bowl in 2005.

Stacey Tullock, Soccer / 1998-2000  In 2000, Tullock was a U21 National Team member. She earned second-team All-American honors by the NSCAA, Soccer America and Soccer Buzz. Tullock was a first-team all-region selection by Soccer Buzz , second-team all-region by the NSCAA, and first-team All-Pac-10 choice. Arizona State's all-time leader in goals (44), game-winning goals (15), assists (19) and total points (107). She played in 20 games with 19 starts. Half of her goals came as game-winners. She led the team in goals (14), game-winning goals (7) and points (33), and scored at least one goal in eight of the first nine games. Tullock scored the game-winning goal in double overtime to defeat fifth-ranked UCLA. She scored another game-winning overtime goal against Georgia. She was two-time Soccer America Team of the Week selection. Tullock produced four straight game-winning goals (9/10-9/21). In 1999, she followed up an outstanding campaign with another brilliant year. She played and started in all 19 games and recorded a team-high 17 goals, seven assists and 41 points, and claimed her second All-American selection by Soccer Buzz. Tullock also earned Pac-10 Offensive Player of the Year honors and led the Pac-10 for the second straight season in goals (17) and total points (41). She was first-team All-Pac-10 choice and selected as one of 12 finalists for the Soccer Buzz National Player of the Year. She was one of only two sophomores selected to the NSCAA All-West Region team. Tullock earned first-team All-West Region honors by Soccer Buzz and she earned Pac-10 Player of the Week honors (9/27). Tullock was the two-time Soccer America Team of the Week selection (9/27, 10/17). Tullock scored two goals, including the game-winner off of a penalty kick to beat nationally-ranked Iowa State, 3-1. Tullock was ASU's all-time goal scorer (30), point's leader (74) and game-winning goals scorer (8). In 1998, she became the school's first All-American selection, awarded by Soccer Buzz. Tullock was named Pacific-10 Conference Freshman of the Year. She was named to the Pac-10 first team, only one of two freshmen to make the team. She earned West Region second team accolades by Soccer Buzz, was named the team's Most Valuable Player, and was selected to the Wisconsin Soccer Invitational All-Tournament Team. Tullock played and started in all 19 games that season. She led the Pac-10 in total points (33) and goals scored (13), and finished third in assists with seven. She also led the team in shots with 93. Tullock accounted for nearly half of the team's total points and one quarter of the team's assists and shots.

Molly Tuter, Women's Basketball / 1994-1997 Third leading scorer in program history with 1,374 career points in four seasons as a Sun Devil. She also ranks fifth all-time in school history in field goals made (504), fifth in 3-point field goals made (116) and fourth in steals (221). Her career average of 13.9 points per game was the team's leading rebounder all four years she played at ASU and led the team in scoring as a sophomore, junior and senior. Tuter led the Sun Devils in steals as a junior and senior, in field goal percentage as a sophomore and senior and in 3-point field goal percentage as a junior and senior. She was honorable mention All-Pac-10 in 1996 and 1997.

Fernando Vina, Baseball / 1990 Vina was First Team All-Pac-10 in 1990. He hit .387 with 108 hits in his only season in Tempe. The .387 average led the Pac-10 South division. Vina was the 9th round pick of the New York Mets in 1990 and two-time Gold Glove winner. He was a 1998 All-Star and played 12 big league seasons for the Mariners, Mets, Brewers, Cardinals and Tigers. Vina served as a Major League baseball analyst for ESPN and now works in the same capacity for Comcast on Oakland Athletics broadcasts in the Bay Area.