Writers, as they go through life, notice and absorb, sometimes unconsciously, the things that are occurring around them and the people they encounter. Sights, sounds, scents, senses, all are tucked away.

Without intention, they are tucking these thoughts and memories away to be used in a story, some day. When that story is ready to be told, it will begin to nudge the writer into action, into putting words on paper. 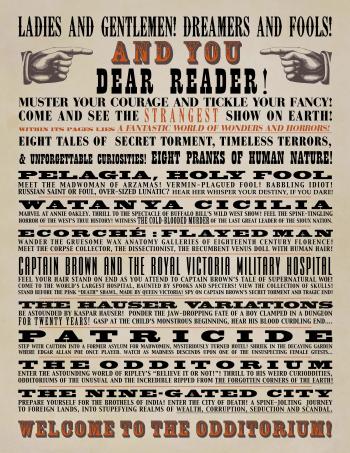 The eight stories in Melissa Pritchard’s new book, “The Odditorium,” began to tug at her pen and her heart five years ago. Extraordinary people who had long fascinated her, hotels with haunted histories, museums of bizarre abnormalities – all fought for a presence.

“The Odditorium” is now published, and already it has won rave reviews:

• In January, the book was reviewed as an "Oprah Book of the Week."

• One of the stories, "Patricide," is available for download on O, the Oprah Winfrey Magazine's  iPad application.

• Barnes and Noble will be doing an author showcase of the collection on their Nook site, "More in Store," in February.

• New York City-based WordTheatre will dramatize part of “The Odditorium,” with Pritchard in the audience, on May 6 in Soho House, New York. Tickets are $25. Order tickets here.

• Carolyn Kellogg wrote a lengthy review of the book that was published in the Los Angeles Times Jan. 15. Kellogg writes of Pritchard, at the end of her review, “She takes risks, different risks in different stories. Can she write a segment in the form of a comedic Shakespearean dialogue? She can. Does a story evolve into epistolary form? It does. Will she be able to build a story around the format of an old newspaper feature? She will. Can she do it all with poetic, vivid prose? With one hand tied behind her back.”

“The Odditorium” includes separate but linked stories with such titles as “Pelagia, Holy Fool,” “Watanya Cicilia” (the title is explained in the middle of the story) and “The Nine-Gated City.”

“Each story has its own genesis, but in each case, I had become fascinated with the story's central character,” Pritchard said. “Robert Ripley, for instance – as a child, I had loved his ‘Believe It or Not’ Sunday cartoons. Sharp shooter Annie Oakley was a childhood heroine of mine, and some of the other characters I wrote about, I stumbled upon in my reading, people like Kaspar Hauser or Pelagia, Holy Fool.

“The main criteria for each story was that something about the person or place obsessed me enough to do the research required. After touring the La Specola Museum in Florence, Italy, I knew I would be writing about the fantastic, 18th century medical wax anatomies I had seen there.

“I stayed in the Richmond, Va., hotel featured in ‘Patricide,’ in the very room I write about, and its haunted history compelled me to imagine a rather dire tale of two sisters.”

Each of the stories also is influenced by architecture, Pritchard added, ranging from the almost-deserted, ghostly Royal Victoria Military Hospital to the lavish Imperial Hotel in Delhi, India, incongruous in a city of poverty and human suffering, a hotel where Pritchard also has stayed.

The language of stories ranges from seemingly breathless writing to leisurely descriptions of the landscape. One of the former is the Ripley of her imagination:

“At the pinnacle of his celebrity, he sported maroon silk Chinese robes and multi-tasseled monkey caps around BION (Believe It or Not), his twenty-eight room mansion in Mamaroneck, New York – retreating on occasion to his favorite ‘curioddity,’ Mon-Lei, a Chinese junque fitted out with twin diesel engines at cross purposes with its billowing, painted sails, so that Ripley was often forced to bob around the harbor outside his home or just sort of spin in a lazy figure eight out there, sipping gin from a Buddhist monk’s yellowed brain pan, part of his human skull collection.”

A more languid passage is from ”Captain Brown and the Royal Victoria Military Hospital”:

“Heedlessly, he wore his new slippers, not yet broken-in, slippers his wife had sent him, made of tobacco-colored leather, with a yellow foulard patterned silk lining. In the moonlight, the pear trees shimmered in their gossamer, ordered rows. An orchard’s beauty lay in its cultivated order, its exact rows of like trees, a green geometry to frame the subtleties of each individual tree, the snowy, fragrant blossoms, the fruit, hard, a speckled green, and female-shaped.”

Pritchard has written three novels and four collections of short stories. Which is the most difficult? “For me, one is not harder than the other, really – I tend to alternate between the two,” she said. “For example, now I am back at work on a short novel, and that feels like a relief after the collection. And after I finish the novel, it will be a relief to turn to stories!”

The road to Pat's Run

My name is Natasha and I work in the Media Relations Department at Arizona State University.

The road to Pat's Run

My name is Natasha and I work in the Media Relations Department at Arizona State University.

About a month ago I was sitting a coffee shop with a friend discussing the opening of the Pat Tillman Veterans Center at ASU’s Tempe campus. After detailing my admiration for those who serve in our nations military, she brought up Pat’s Run and how much fun she had participating in the run in the past.

For those who do not know, Pat’s Run is an annual event held by the Pat Tillman Foundation to pay tribute to ASU alum Pat Tillman who lost his life serving in Afghanistan. It is held at Sun Devil Stadium and attracts over 35,000 people each year.

Now, I should take this time to mention that I am not a runner. To be quite honest, the thought of exercising alone exhausts me.  So initially when my friend suggested I sign-up for the run my reply was, “Are you crazy?”  But then we got to talking and I decided that this could be my way of paying tribute to those who serve our country.

I’ve been fortunate enough to speak those who knew Pat well. Though the stories are different, they all speak to Pat’s generosity, strength, sense of humor and love for his country. He was a leader who always tried to do the right thing. If participating in the annual run means honoring this spirit, then count me in. And hopefully, the running part will fall into place.

So, in a nutshell this blog will chronicle my training adventures… and sometimes misadventures. This includes running, diet changes and outlook life as I journey to become a runner. But first, there are some things you need to know about me:

With that I will leave for today. I look forward to sharing my experiences and hope you will share yours too!