One of the 25 best inventions in 2013, according to TIME magazine, was the brief “resurrection” of the gastric brooding frog, extinct since 1983. Biologists at the University of Newcastle in Australia implanted preserved nuclei – collected from the frogs in the 1970s and kept on ice – into the egg of another frog species. The eggs divided spontaneously and developed into an embryo. Though none of the embryos survived for long, the complete genetic material from the extinct frog was present.

The “de-extinction” of species is only one of the many potentially transformative outcomes that may result from the field of synthetic biology. Other researchers are working to develop renewable biofuels; crops that require less water and fertilizer; more efficient and greener processes to produce chemicals; and new therapeutics and diagnostics for a wide range of human illnesses, among other projects.

While on the surface, all of these projects seem beneficial to society, they also include the possibility of unintended negative consequences to the environment and human health. For example, in 2005 researchers recreated the Spanish Flu, a virus that killed an estimated 50 million people worldwide in 1918. The goal of the scientists – to study and understand the virus’s lethality – was noble, but it is not hard to imagine how this information in the wrong hands could lead to a bioterrorism event of horrific proportions. Furthermore, while most scientists agree that we’re far from the ability to create life from scratch, the ethics of manipulating life and funding research to get better at doing so are pertinent issues now.

To help figure out how to grapple with these issues, the National Science Foundation (NSF) has awarded $150,000 to David Guston and Jenny Dyck Brian of Arizona State University, along with Richard Murray of the California Institute of Technology (Caltech), Pasadena, to conduct a workshop to develop research agendas addressing the societal questions of synthetic biology.

One of the primary goals of the workshop is to take a preemptive, bigger-picture approach to the field of synthetic biology. “Frequently, social scientists and technologists will work in isolation, and technologists will not consider societal impact of their work until after the work has proceeded,” says Susanne von Bodman, NSF program director. “At the end of technology development, it sometimes becomes difficult to engage the public because the technology has already taken a certain path. We hope that the community, by meeting early in the development of the technology of synthetic biology, will be able to plan for how best to engage the public and deal with the societal aspects of the technology as it develops.”

The workshop aims to bring together a large segment of social scientists and humanists, along with natural scientists and engineers, working in synthetic biology. Three NSF directorates are co-funding the workshop: biology, engineering and social, behavioral and economic (SBE) sciences.

“We want to provide an opportunity for them to meet each other, discuss societally-focused research agendas and articulate compelling visions of what that research might be and how to get it done,” says David Guston, a professor in the School of Politics and Global Studies at ASU. He is also co-director of the Consortium for Science, Policy and Outcomes (CSPO) and director of the NSF-funded Center for Nanotechnology in Society at ASU (CNS-ASU), which has been a leader in building a capacity to anticipate a variety of futures for emerging technologies through developing a vision of anticipatory governance.

Workshop participants will examine what research suits synthetic biology in particular. “A research agenda on societal issues should be different for synthetic biology than for nanotechnology or geoengineering,” says Guston. “How and where synthetic biology is emerging geographically, who’s funding it, what the norms of the researchers who are on the technical side of the field are, and how they’re handling challenges all affect that agenda.”

Expanding and continuing the conversation

Workshop co-organizer Richard Murray, professor of control and dynamical systems and bioengineering at Caltech, has worked on developing artificial molecular programs. He notes that the synthetic biology community has been relatively proactive about engaging different groups and thinking about societal issues. He sites the Asilomar Conference on Recombinant DNA from 1975 and the Synthetic Biology 1.0 meeting held 2004, both of which addressed and incorporated societal issues.

“What’s been missing, or hasn’t been as present,” says Murray, “is broad engagement with the social scientists.”  Furthermore, because the field is expanding and part of it is becoming more of an engineering discipline, “it’s a good time to have another conversation to see whether there are new issues and things we should be thinking about that we’re not,” says Murray.

One current challenge is raising awareness of these issues with biological engineers. The workshop will be able to draw on lessons learned from the International Genetically Engineered Machines (iGEM) competition, which involves more than 1,000 primarily undergraduate students from around the world each year. “A big part of iGEM has increasingly been thinking about the standards of the practice and how to understand ethical, legal and safety issues. All iGEM teams have that as part of their projects,” says Murray, who is a faculty sponsor at Caltech. Members of ASU’s current iGEM team have been invited to the workshop.

Raising awareness with the public about synthetic biology is another challenge the workshop will consider. “The public is relatively unaware of what the possible benefits are, in part, because those benefits haven’t yet been developed to the point where people can say for sure they’re going to happen,” says Murray. “On the other side, people worry about creating life, and [whether] should humans do that, though we’re far from that.”

While a life form has made use of synthesized DNA, “it couldn’t be done without the original living organism or the DNA it was synthesized with from another living organism,” explains Murray. “But people hear about it and worry about whether you can go and engineer organisms arbitrarily. We want to make sure people understand what really can and can’t be done, and what people really want to be able to do and how it can be used for the benefit of society.”

The business side of synbio

The workshop will also look at how to address the potential implications of synthetic biology on the bioeconomy, the political landscape and sustainability. “We want to look at some of the fascinating and complex issues that tend to get left out of larger policy reports,” says Jenny Dyck Brian, Honors Faculty Fellow in Barrett, the Honors College, at ASU and the third organizer of the workshop. She is also affiliate faculty with CSPO, the W.P. Carey School of Business and the School of Life Sciences. Her research has addressed how companies consider ethics when funding potentially transformative technologies.

A report released in May by Allied Market Research forecasts the global synthetic biology market to reach $38.7 billion by 2020. “Companies like BP and ExxonMobil are investing millions and millions of dollars in this technology, and the UK has put it on their list as one of the top eight innovations,” says Brian. “Yet there are currently no synthetic biology products.”

Another policy consideration will be the shift to more open source development. “It goes against other models of scientific innovation, which heavily rely on patents,” says Brian.

The workshop will take place Nov. 4-6, at the Tempe Mission Palms hotel. While the workshop is by invitation only, a public website with background papers, interviews and videos will be available after the workshop.

The School of Politics and Global Studies, School of Life Sciences, Consortium for Science, Policy and Outcomes, and Center for Nanotechnology in Society are all research units in ASU's College of Liberal Arts and Sciences.

Top leaders from Starbucks and State Farm, as well Arizona State University's athletic director (a former NFL executive), are among those headlining the new season of the Economic Club of Phoenix speaker series.

Top leaders from Starbucks and State Farm, as well as Arizona State University's athletic director (a former NFL executive), are among those headlining the new season of the Economic Club of Phoenix speaker series. Every year, Phoenix-area audiences are invited to attend the club’s luncheons and hear from some of the biggest names in the business world.

“We want to offer people in the Phoenix area the opportunity to hear directly from the heads of major local companies and international firms,” explains Amy Hillman, dean of the W. P. Carey School of Business at Arizona State University. “In this series, they cover both what’s happening in their own companies and larger trends in the business arena.” 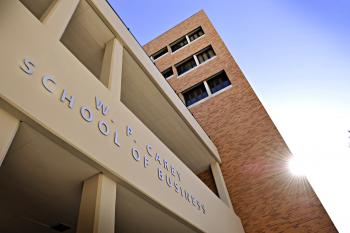 The Economic Club of Phoenix (ECP) speaker series, hosted by the W. P. Carey School of Business, is celebrating its 30th anniversary. The club is now the pre-eminent Arizona forum for the exchange of ideas about business and the economy. Its monthly luncheons and other activities offer business leaders and others a chance to network and engage.

This season’s speaker lineup, subject to change, is:

All luncheons run from 11:30 a.m. to 1:30 p.m. Non-members are welcome for a $75 luncheon fee. Funds in excess of the cost of lunch are used to support scholarships and faculty research at the W. P. Carey School of Business.

For more information about the club or to reserve seats, call (480) 727-0596, e-mail wpcarey.ecp@asu.edu or go to www.econclubphx.org.