See a video about Project Note-Taker

Millions of students will someday be less hindered by their visual impairments if a recent Arizona State University graduate and three current ASU students realize their ambitions.

The Note-Taker camera can tilt up and down, sweep side to side, and zoom in on a target. 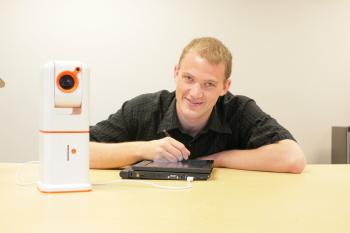 The tablet computer provides a split-screen display. One half of the screen has a window that shows live video from the camera, while the other half has a window used for handwriting or typing notes.

The split-screen interface enables students with visual impairments to glance back and forth between the live video view of the classroom presentation and their notes.

The video window allows the user to aim and zoom the camera by using simple dragging, tapping or pinching motions within the video window.

Calling themselves Team Note-Taker, the four developers of the device won the first prize in the Software Design category of the Microsoft Imagine Cup U.S. Finals last spring. Then in July they took second place in the same category of the Imagine Cup World Finals, the premier international student technology competition.

Those achievements are only a warm-up exercise, the team members say.

Now they will concentrate on the ultimate purpose of their endeavor:  To develop next-generation Note-Taker prototypes and see the device developed into a viable commercial product that can be made available to students with visual impairments.

“It’s not a manufacturable product right now, but I think the team can improve the design to the point where the Note-Taker could be manufactured affordably and marketed,” says John Black, an ASU research scientist and Team Note-Taker’s mentor.

Yan is seeking a master’s degree in The Design School in ASU’s Herberger Institute for Design and the Arts.

Hayden, the initial inventor of the Note-Taker – who created the device to help him overcome his own visual impairment – has earned an undergraduate degree in computer science in the Fulton Schools of Engineering, as well as a math degree through the ASU’s College of Liberal Arts and Sciences.

He spent the summer in an internship with Google, and will begin studies this fall toward a doctorate in computer science at the Massachusetts Institute of Technology.

Despite the demands of their academic pursuits, the members of Team Note-Taker intend to push steadfastly forward with refinements to their Note-Taker design.

Their first-place prize in the Imagine Cup U.S. Finals earned a $25,000 grant from Microsoft Corporation for the Center for Cognitive Ubiquitous Computing – or CUbiC – the laboratory in ASU’s School of Computing, Informatics, and Decision Systems Engineering where much of the work on the Note-Taker has been done. The award will provide support for their ongoing work on the Note-Taker’s development.

CUbiC focuses on the design of technologies and devices to assist people with perceptual or cognitive disabilities.

The team will conduct usability testing, part of which will include giving visually impaired students Note-Taker prototypes to use in their classes. The students will then provide feedback on how well the Note-Taker meets their needs.

The current Note-Taker is a third-generation model. The team plans to develop a fourth-generation prototype that can be more affordably manufactured and is more compact. A planned fifth-generation device will take advantage of the latest advances in digital video technology to boost the Note-Taker’s performance.

Hayden wants to see the device made smaller and lighter, with reduced noise from the motors that control its moving parts.

The team plans to add audio and video recording functions that provide synchronized playback of lectures, along with the corresponding handwritten or typed notes – enabling students to quickly review lessons after classes.

These improvements will allow students to select any portion of the handwritten or typed notes previously taken in class, and then see the video that was recorded while the notes were being taken.

The Association of Collegiate Water Polo Coaches has announced its annual academic award winners with the ASU water polo program, along with seven individual student-athletes.

The Association of Collegiate Water Polo Coaches (ACWPC) has announced its annual academic award winners with the Arizona State University water polo program, along with seven individual student-athletes, earning a place on the 2011 ACWPC All-Academic lists. The Sun Devils, who combined as a team, carried a 3.17 overall grade point average, which ranked them among the Top 20 nationally across all divisions. 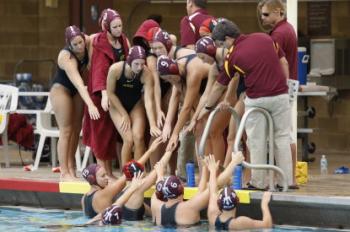 Unbehaun joined Bonnie Miles (2007-10) as the only two Sun Devils to garner four mentions on the ACWPC All-Academic lists in their careers while Salloum was added to the list for the third time in career, making her one of four to do so for the program. In her career, Unbehaun earned Superior distinction all four years (2008-11) while Miles finished with an Outstanding distinction as a senior following three-consecutive years at Superior.

While Hutchinson collected her first career national academic honor, the remaining four honored Sun Devils each secured the second selections of their careers. Carter earned Excellent distinction for the second year in a row while Young was selected Superior for the second year in a row. Haas and Harris both moved up one level from last year to 2011 as Haas went from Superior to Outstanding while Harris rose from Excellent to Superior.

Overall, 31 Sun Devils have earned ACWPC All-Academic honors in their careers in Tempe with a total of 53 accolades combined. Of those 31 women, 14 were honored two or more times in their careers.