Twenty-seven students from 19 universities traveled to more than 23 states and interviewed hundreds of individuals to report and produce “America’s Weed Rush.” The project is at weedrush.news21.com.

Portions of the investigation will be published by major media partners, including The Washington Post, nbcnews.com, the Center for Public Integrity, The Philadelphia Inquirer, the E.W. Scripps Co., Alabama Media Group and The Cincinnati Enquirer, plus a number of nonprofit online news sites affiliated with the Investigative News Network.

“This investigation goes beyond the general conversation of those who support and oppose the legalization of marijuana,” said Jacquee Petchel, News21 executive editor and a Pulitzer Prize-winning journalist. “It takes you inside the lives of regular people across America, uncovering the complexities of this growing national issue.”

Work on the project started in January with a video-conference seminar on marijuana issues taught by Downie. The seminar included special guest speakers from the U.S. Drug Enforcement Agency and pro-marijuana groups, as well as journalists such as Bob Woodward of The Washington Post.

From late May to the end of July, the student journalism fellows completed work on the project in an intensive 10-week newsroom experience based at the Cronkite School newsroom on the ASU Downtown Phoenix campus. Students traversed the country in multimedia reporting teams, interviewing marijuana advocates and proponents in both urban and rural areas.

“With 27 student reporters from 19 universities, we were able to dig more deeply into the issues and do on-the-ground reporting in nearly half the states across the country, producing enterprising stories, photos, videos and innovative multimedia for our many news media publishing partners that they would not have had from any other source,” Downie said.

The program is designed to give students experience producing in-depth news coverage on critical issues facing the nation, using innovative digital methods to distribute the content on multiple platforms. In the past six years, previous projects have included investigations into post-9/11 veterans, voting rights, and guns in America.

The investigation contains an unprecedented number of videos and databases, including a visualization of medical marijuana testing practices by state as well as a social media analysis of the evolution of views on marijuana over the past several years.

ASU student Jessie Wardarski traveled to six states in a two-week timespan, shooting photos and videos for the investigation. She said working with award-winning journalists such as Petchel and Downie was an extraordinary experience.

“News21 has helped me realized that I love to do it all,” Wardarski said. “Everything you do is at the cutting edge. It’s really cool to work in this environment.”

You might say the Moen triplets are competitive — but that friendly rivalry has helped them excel academically. The high-achieving siblings from Arkansas will all three be attending Barrett, The Honors College at ASU's West campus this fall.

“[Grant] would never let me hear the end of it when he beat me on the PSAT by like one point,” Claire Moen says of one of her brothers. All three triplets will all be attending Arizona State University at its West campus this fall. “He was so proud of himself for beating me on that.” 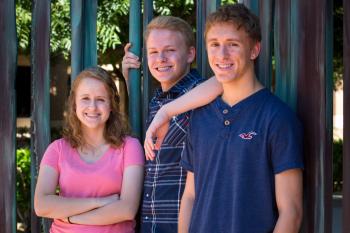 The Moen triplets – Claire, Anders (center) and Grant, pictured at the Paley Gates that welcome freshmen to ASU's West campus — have followed the same path to Barrett, The Honors College at West. The family was drawn to the campus' small-college feel, while still offering the resources of a large university. Download Full Image

Grant is quick to respond, albeit in a lowered voice: “It was more than one point.”

The high-achieving triplets — Anders, Claire and Grant — offer an interesting take on the age-old debate of nature vs. nurture, and they would seem to offer evidence of the latter. They were all active in sports and extracurricular activities in high school — but not always the same ones.

It seems as if academic acumen comes naturally to the siblings, who will all be members of Barrett, The Honors College. However, when asked if they think it has anything to do with the fact that they push each other to achieve more, Anders is quick to respond: “Yeah.”

“It definitely helps, for sure,” Grant says.

“I guess we also kind of hold each other responsible to succeed,” Claire adds.

Kathy Lemery-Chalfant, associate professor of psychology at ASU, says that sets of multiples often tend to be more competitive compared with single-born siblings, simply because they are all the same age.

“They’re compared a lot more to each other throughout their whole life,” Lemery-Chalfant said. “There’s always a comparison in terms of grades, height, hair color, etc. from the get-go.”

The Moens are an example of when that phenomenon goes right.

“It’s funny, the first day we found out we were having triplets I thought about college,” Todd says. “And if they didn’t have the drive themselves, they wouldn’t be sitting where they are today.”

Originally from Arizona, the Moen trio spent most of their lives in Arkansas, where they attended Harmony Grove High School.

Anders is an art lover who often indulges in sketching and painting. Grant is a sports guy, who was a starting player on his basketball team and a lead scorer on his soccer team. Claire enjoys reading and taking the helm on various projects, events and activities.

Despite their varied interests, when it came time to choose a college, the siblings knew they wanted to stick together. So they did their research.

“We visited quite a few schools in Arkansas,” Anders said, but they never found what they were looking for.

At that point, their parents got in on the search.

“My wife and I, we were looking for more of a liberal-arts-style school for them,” Todd says. “But as we looked, we noticed other schools didn’t have the resources and the programs that a larger university had.”

The Moens still had family in Arizona and decided to look into ASU’s West campus, which offers that smaller, liberal-arts-school feel they were looking for without sacrificing on the resources larger universities offer.

It was a perfect fit.

“For all of us, it was really kind of like, ‘Wow, they’ve got everything,’ ” Todd says.

So they packed up and headed back to Arizona, ASU West-bound.

Anders will be studying accounting while Claire and Grant are both going into medicine. All three will be living on the West campus this fall, and their excitement is palpable.

And, it’s safe to say, their father shares in their enthusiasm.

“Now they’re in a place where all doors are open to them,” he says.