In January 2013, just a few months shy of earning her doctorate in molecular cell biology at the University of Queensland, Marga Gual Soler was on the standard path toward becoming a researcher.

But after so many isolated hours in a lab, her area of vision often confined to the microscopic world of traveling proteins, Gual Soler was feeling disconnected. 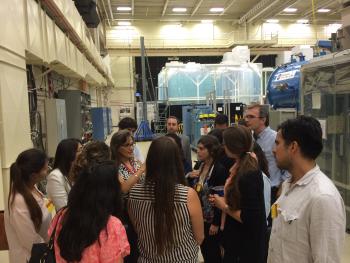 Clark Miller, ASU associate director of the Consortium for Science, Policy and Outcomes, discusses the history of science and U.S. foreign policy during a walking tour of several Washington, D.C., memorials. His audience was made up of participants in a new summer program on science diplomacy and leadership, the latest in the consortium's Science Outside the Lab offerings. Photo by: Carlo Altamirano Allende Download Full Image

“I had lost the sense of meaning and impact of my work,” she said.

She decided to veer off the typical science doctoral path and set her sights on a much wider world through an internship with the United Nations.

While observing UN meetings on such topics as climate change, food security and malaria, Gual Soler was surprised to see that there were almost no scientists among the diplomats. Though the UN regularly brought in scientists to give statements about the topics, the UN didn’t have the capacity to employ full-time scientists to participate in the subsequent in-depth negotiations.

“All of these challenges and debates require scientific expertise to inform them,” said Gual Soler. “If scientists aren’t present, then the diplomats need to be scientifically prepared to talk about CO2.”

Gual Soler saw this as opportunity. Why not either proactively train scientists to be diplomats themselves or improve their ability to communicate science to diplomats?

Gual Soler researched how science fits into the big puzzle of international development, first while she was still an intern with the UN and then as part of a science diplomacy fellowship with the American Association for the Advancement of Science.

There, she was tasked with identifying the complex interplay of science, economics, politics and culture that leads to a successful science-cooperation negotiation between Latin American countries.

One of the first things she noticed was that the people making alliances at these multilateral meetings weren’t just colleagues – they were friends and, above all, trusted each other. She realized that science communication must, in part, be tailored for social inclusion.

“Too often science communication is elitist, but science diplomacy is more about empathy – putting yourself in the position of the other – to understand their values, what is important to them and what competing interests might be at play,” Gual Soler said. “It’s important to connect first and then bring in the science afterwards.”

Now, as an assistant research faculty with the ASU Center for Engagement and Training in Science and Society (CENTSS), Gual Soler has helped develop a new summer program on science diplomacy and leadership for Latin American science and engineering graduate students.

It’s the latest addition to the Consortium for Science, Policy and Outcomes’ Science Outside the Lab (SOtL) program, begun in 2002 to teach students the ins and outs of federal science policy development. The new science diplomacy and leadership track expanded that focus to a hemispheric scale.

Held June 21-30 in Washington, D.C., the new program brought together a cohort of 14 students from seven Latin American countries and the U.S. Throughout the intensive 10-day program, participants met with leaders in Latin American science diplomacy and participated in workshops and simulations to improve their negotiation, empathy and communications skills.

“The science diplomacy program fills an important niche in our SOtL workshops by bringing a global perspective to our efforts to understand the complexity of the science policy system, the many points in which decisions are made, and the structures that force decisions to be made,” said Ira Bennett, co-director of CENTSS and assistant director of education at the Center for Nanotechnology in Society at ASU.

“We wanted them to understand the role that science plays in those decisions and the roles that science doesn’t play,” added Bennett, who along with Jameson Wetmore, associate professor and co-director of CENTSS, has been running the SOtL program since 2007.

One of the toughest things for science students, Bennett explained, whether they end up working at the laboratory, national or international scale, is that they’ll see science-related decisions made every day that they don’t agree with.

“But once you crack through the veneer of politics and reveal the complexity of the system,” Bennett said, “they see that the apparatus is full of thousands of people who get up every morning to work hard to make the U.S., or Argentina, or the world a better place.”

Participant Maria Inés Carabajal said one of the things she appreciated most about the new ASU summer program was its use of non-traditional approaches to learning, training she feels is missing in many Latin American doctoral programs.

“We need to learn how to interact with policymakers, politicians and diplomats and to find a shared language,” said Carabajal, a student from the University of Buenos Aires pursuing a doctorate in Climate Services funded by the Inter-American Institute for Global Change Research. “Learning through games and simulations of real-life international negotiation scenarios allowed us to put ourselves in the shoes of both the scientists and decision-makers.”

One of the central challenges for science diplomacy is management of shared resources. During the program, students played a “tragedy of the commons” game in which they had to manage a fishery in a lake bordered by several different countries. Each participant played the role of a different interested individual and was limited to communicating via Twitter because of its accessibility and low-bandwidth requirements.

“The difficulty is coordinating what you take out of the fishery with what everybody else takes so that the fishery doesn’t collapse,” said Thomas Seager, one of the facilitators of the program.

“We run this game so that people can see how difficult it is to manage a problem of the commons, especially when there are language and cultural barriers,” said Seager, associate professor and Lincoln Fellow of Ethics and Sustainability in the ASU School of Sustainable Engineering and the Built Environment.

The program also served as a catalyst to build a regional network among the students and with Latin American science diplomacy leaders. Students met experts including Ernesto Fernandez-Polcuch, United Nations Educational, Scientific and Cultural Organization senior science policy adviser; Cristina Rabadan-Diehl, director of the Office of the Americas in the Office of Global Affairs for the U.S. Department of Health and Human Services; and U.S. science envoy Peter Hotez.

Astrid Hassel Criales Johnson, another participant, is an architect pursuing a master’s degree in Science and Technology Policy and Management at Cayetano Heredia University in Peru. Throughout the program, she was surprised by the richness of Latin American science and technology, but also by the disconnection between countries.

“We all go about it in our own way,” Criales Johnson said. “But if we take advantage of spaces like this program, we can establish a stronger network, learn from each other and the U.S., and effect change in our own region.”

The new Science Diplomacy and Leadership program is part of a larger effort by ASU to establish more opportunities for science diplomacy education. The Consortium for Science, Policy and Outcomes will soon be offering a new science diplomacy track option as part of its Master of Science and Technology Policy degree.

“National borders and political divides don’t matter so much when we’re talking about the greatest challenges we’re facing – climate change, food security, pollution, fresh-water availability, or agriculture or health pandemics,” said Gual Soler. “The language of science can bring you together in some dimension when you thought you had nothing in common. It’s a common language to bridge cultures, countries and ideologies.”

Read more about the experiences from the participants’ perspectives at the Consortium for Science, Policy and Outcomes’ blog As We Now Think.

ASU's Herberger Institute for Design and the Arts is launching the Curb Creative Enterprise and Cultural Leadership Program to train cultural strategists, disruptors and catalysts.

Creative thinking at ASU has designed better wheelchairs for people with limited mobility. 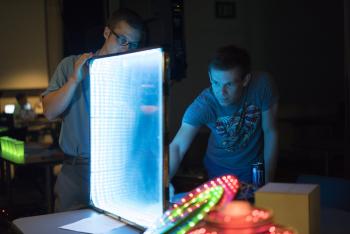 ASU students demonstrate their work at the Spring 2015 Digital Culture Showcase in the Herberger Institute for Design and the Arts. Photo by: Sean Deckert Download Full Image

And it has used digital art to create educational games that teach advanced concepts to college students.

Now the faculty and students at ASU’s Herberger Institute for Design and the Arts will have more opportunities to consider the way creativity solves social challenges as the institute is launching the Curb Creative Enterprise and Cultural Leadership Program to train cultural strategists, disruptors and catalysts.

The program, one of the first of its kind, is a collaboration between the institute and the Mike Curb Family Foundation.

Faculty are currently shaping the program’s curriculum, which will initially be offered in fall 2016. It will include institute-wide courses examining the intersection of business, government and leadership in the creative and cultural industries. In addition, it will engage national leaders who demonstrate the power of bringing together art and leadership for cultural, social and economic progress.

“Unlike most existing programs, we aren’t just trying to prepare students for existing jobs,” said Steven J. Tepper, dean of the Herberger Institute. “We’re giving people tools to innovate and amplify the power of art and design in society.”

ASU’s McCain Institute for International Leadership is a partner in the new program, providing opportunities for Herberger Institute faculty and students to connect art, design and creativity to global issues around security, economic opportunity, freedom and human dignity. Herberger Institute faculty, for example, have recently worked with a cohort of The McCain Institute’s Next Generation Leaders to use “design thinking” to inform their policy work in their home countries.

“Entrepreneurship and creativity are in ASU’s DNA,” says ASU President Michael Crow. “ASU is proud to partner with the Mike Curb Family Foundation, whose gift makes it possible to launch this innovative program and help our students develop the tools they need to thrive in a rapidly changing economic and professional landscape.”

The program draws inspiration from Mike Curb’s life. A Nashville-based songwriter, musician and producer, Curb is also the founder of the oldest record company in the nation still operated by its founder, with more than 300 number-one charting records. He is also a political leader, public servant and philanthropist, having served as acting governor and lieutenant governor of California.

“Mike sees the critical connection between culture and leadership, and he understands how arts and culture create public value,” says Tepper. “He has used his creative talents as a musician, producer and businessman to advance ideas in education, cultural preservation and social and cultural equality.”

Tepper added, “Now, as cultural leaders search for new models to strengthen the arts and connect to new partners, the Curb program will give students the tools to come up with the organizations, enterprises and policies that will shape culture for the next 100 years.”

The Master of Arts in Creative Enterprise and Cultural Leadership is expected to launch fall 2016.

For more information, contact Linda Essig, Herberger Institute director of enterprise and entrepreneurship programs and Evelyn Smith Professor in the School of Film, Dance and Theatre.

Entrepreneurship Herberger Institute for Design and the Arts Arts