Beginning April 9 and continuing on April 16 and April 23, a new three-episode PBS series, "Your Inner Fish," will air on Eight, Arizona PBS at 9 p.m. MST. The April 23 episode of this new science documentary features footage shot in Ethiopia at the time of the 2012 Institute of Human Origins’ field school in Hadar, Ethiopia, led by institute director William Kimbel, and on-site interviews with Kimbel and institute founding director Donald Johanson.

Four-minute video trailers for the series feature Kimbel and Johanson in the Rift Valley of Ethiopia speaking with series host and paleobiologist Neil Shubin in “Ancient Hands, Ancient Tools,” and again with Johanson in the IHO Hadar field camp research tents in “Amazing Places, Amazing Fossils: Lucy,” at http://www.pbs.org/your-inner-fish/watch/. 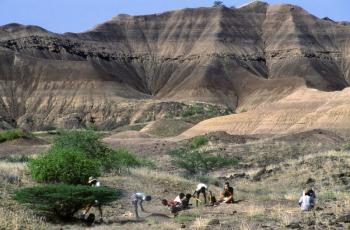 More information on the program can be found at http://www.pbs.org/your-inner-fish/home/.

The Institute of Human Origins is a research center of the College of Liberal Arts and Sciences in the School of Human Evolution and Social Change.

Maintaining stability in the face of rapid change and growth, and proactively partaking in cooperative global ties in science and technology fields will be key in helping China become an innovation-based economy, according to ASU's Denis Simon.

Maintaining stability in the face of rapid change and growth, and proactively partaking in cooperative global ties in science and technology fields will be key in helping China become an innovation-based economy, according to Denis Simon, vice provost for International Strategic Initiatives at Arizona State University.

One of the world’s leading experts on science, technology and innovation in China, Simon recently hosted an ASU conference that focused on the evolving role of science and technology in China’s international relations. Supplemented with strategic investments in research and development over the last five years, a more active participation in cross-border science and technology collaboration is also allowing China to have a greater voice and more influence in setting the global agenda regarding specific focus areas on an international platform. China is becoming increasingly effective at using science and technology diplomacy to promote economic and trade cooperation, such as with its 2011 launch of the China-Africa Science and Technology Partnership Program. 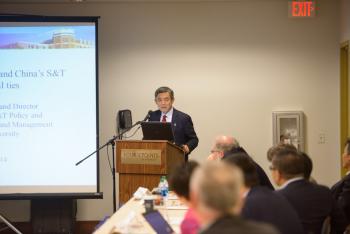 “In the past, China shared asymmetrical relationships with most countries, especially from the West,” said Simon. “When it came to science and technology cooperation, it was often simply the recipient of technologies as part of a very hierarchical relationship. In today’s world of globally-oriented knowledge networks, we are seeing China shift away from the traditional unilateral patterns of technology transfer to establishing more bilateral, mutually beneficial patterns by strengthening its domestic innovation system. Chinese officials now understand that to get technology, you increasingly have to have some technology and related capabilities.”

The ASU conference featured more than 30 speakers and panelists from all over the world, including Xue Lan from China’s Tsinghua University, Wang Zhongcheng from China Science and Technology Exchange Center, Liu Xielin from the Chinese Academy of Sciences, Nannan Lundin from Sweden’s Global Challenge and Mark Cohen from the United States Patent and Trademark Office.

The panel of experts examined a diverse array of topics, including the policies and strategies that drive China’s international science and technology relations; its government-to-government relationships with specific countries; international space competition; China’s role in climate change and clean energy; changing patterns of technology transfer to and from China; and China’s evolving role in the global intellectual property regime.

The conference also looked at the role of China’s returning scientists and engineers, many of whom have graduate degrees from North America and Europe. These returnees have the potential to play a catalytic role as China tries to improve its research and development infrastructure.

Cao Cong, a faculty member from the University of Nottingham in the United Kingdom, said that more than 1.4 million Chinese citizens living or working abroad had returned to China by the end of 2013. He noted that most returnees have focused on building institutions supporting science and technology, as well as on efforts to improve the management and funding of research and development activities.

The Chinese government systematically has supported the return of its talented citizens by launching programs like The Thousand Young Talent program and the Chang Jiang Scholars Program.

“However, there are a few emerging concerns,” said Cao. “Researchers from China and abroad are carefully watching the role of the Chinese government in determining research productivity and culture. They are also paying close attention to China’s short term versus long term research goals, the accountability of the scientific community to the public and political leadership, and the role returnees will play in pursuing excellence in research versus challenging the current system.”

Nannan Lundin from Global Challenge, an independent Swedish think tank, remarked that while China’s rapid growth as the world’s second largest economy is a source of outside admiration and national pride, it is important to ask some pointed questions.

“China won’t be considered an innovation economy unless it is seen as a global commercial success,” Lundin said. “Not only do we need international collaboration for multidisciplinary work to overcome the gaps in basic research and new knowledge creation, but we also need to train Chinese researchers to apply their knowledge suitably to drive commercial success.”

“China steadily positioning itself to play a more active and important role in international science and technology affairs is a good development,” said Simon. “I cannot imagine one single current global science and technology-related problem or challenge – including climate change, new energy, world health, etc. – that will not require close collaboration between China, the U.S. and the world’s other major advanced countries to find real solutions.”

Or as Li Xin of the Ministry of Science and Technology of China said while commenting on global S&T issues, “We are not only part of the problem, but we are part of the solution too.”