A new partnership between the Department of English in the College of Liberal Arts and Sciences and the Ira A. Fulton Schools of Engineering at Arizona State University is bridging the cultural gap that many international students experience when they arrive in a new country.

Recognizing that strong writing and communication skills are crucial to student achievement in college and beyond, the engineering schools approached the English Department for assistance in helping its international students better succeed. 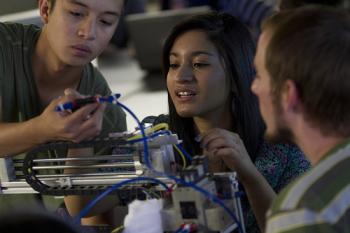 In response, the English Department established FSE 194 English for Engineering, a pilot course designed specifically for this group of students to learn important academic writing techniques, for engineers, citation styles in engineering research and working effectively in teams on writing projects, as well as become familiar with American and ASU culture. It will complement the required Introduction to Engineering (FSE 100) and First Year Composition (Eng 107) courses that first-year engineering students must take.

“This type of course can provide our international colleagues with not just enhanced skills, but can expand their comfort zone by helping forge connections to their immediate cultural environment, and thereby allowing them to better flourish,” said Mark Lussier, professor and chair of English.

Two pilot sections of the course are currently being offered this spring. Those interested in learning more about the course offerings can view the complete schedule here.

Two Naval Reserve Officers Training Corps midshipmen were awarded their commission in the Navy in a ceremony on Dec. 19.

Patrick Kenney, dean of the College of Liberal Arts and Sciences spoke at the event, highlighting the role Arizona State University students take in serving their country. 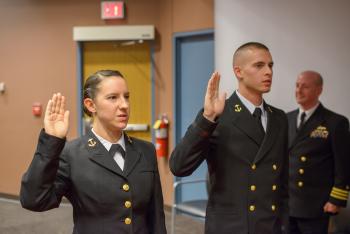 “I’m very proud of our relationships with the Naval Science Department, and have the greatest respect for their service but, more importantly, for the sacrifices these two new Naval Officers and their families are making for the nation. I wish them the best of luck,” said Kenney, who is also a professor in the School of Politics and Global Studies.

Commissioning is the culmination of a long training path for ASU midshipmen. Although numerous Naval ROTC midshipmen across the nation will receive commissions over the next few weeks, the opportunity to earn one in the U.S. Navy is still quite rare. Only about 1,000 commissions are awarded to graduating Naval ROTC midshipmen around the country each year, noted Erich Schmidt, commander and assistant professor of naval science at ASU.

After taking the oath of office, each new officer had family members exchange the insignia of a midshipman for that of a naval officer. The newly commissioned officers, with the rank of ensign in the Navy, then rendered their first salute to ASU’s senior drill instructor, Gunnery Sergeant Daniel Martinez, USMC. Martinez said, “It is great to see them arrive at the program as high school graduates, and watch them develop into the future of naval service leadership.”

Newly commissioned officers will serve around the world in a variety of military occupational specialties. Ensign Fikel will attend pilot training in Pensacola, Fla.

"As I reflect on the last four and half years, I have learned to value perseverance and hard work,” said Finkel. “It has allowed for me to accomplish many goals and excel in tasks. ROTC has afforded me life opportunities that I didn't deem possible, and given me friends that I will keep in contact with."

While commissioning ceremonies are usually well attended, Ensign Fikel was supported by more than 50 friends and family. Cindy Fikel said of her daughter’s commissioning: “I am so proud of her achievements and the journey she is about to embark on.”

Ensign Olehausen was chosen for the highly selective Navy Nuclear Power Program and service in submarines and will attend initial training in Charleston, S.C. He had this to say about his time at ASU and his commissioning week: “It's been an exhausting couple weeks, a hectic semester and a long four and one half years ... but I wouldn't change any of it.”

Olehausen’s father said, “We know that he’ll serve with integrity and perform his duties to the best of his abilities.” Olehausen’s parents are both military veterans, reflecting that service in the Armed Forces is often passed down in families, and nearly always inspired by someone close to the new service member.

The Naval ROTC unit at Arizona State was established in 2010 and has since grown to be one of the largest in the nation. Learn more about the program and how to apply for scholarships that lead to a commission as an officer in the Navy or Marine Corps at http://nrotc.asu.edu.