The play “Pockets of Bread,” written by internationally known Romanian playwright and poet, Matei Vişniec, will be performed at 7:30 p.m., Nov. 5-6 at the Empty Space Theatre housed in the Performing and Media Arts building, 970 E. University Drive, Tempe. The performance, presented by Arizona State University’s Romanian studies program is free and open to the public.

Romanian actor Dragoş Pop, who visits ASU annually for performances, is the director of “Pockets of Bread.” He is also starring in the play, along with ASU associate professor of theatre and film, Lance Gharavi. 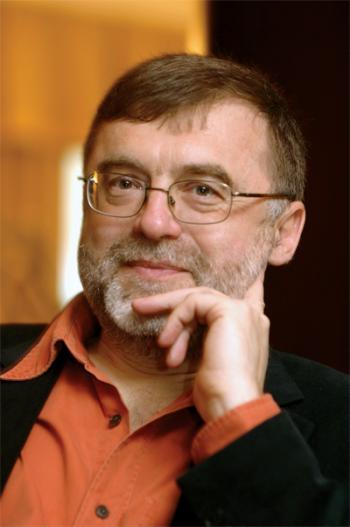 These events are part of the launch of the Central European Cultural Collaborative (CECC). The Romanian studies program in the School of International Letters and Cultures and the Department of English have partnered to create the CECC, which will serve as a bridge between Romania and Arizona – and in time, several other countries in the region – to create a mutually beneficial environment fostering the exchange of art, culture and scholarly pursuits.

“These efforts are part of a larger commitment to offer faculty and students opportunities for global engagement, a pressing and significant move on the part of the Department of English,” says Maureen Daly Goggin, professor and chair of English.

While the collaboration is new, Romanian culture has been a part of ASU for several years now, thanks to Ileana Orlich, who is a professor of Romanian studies and English, the 2011 Parent’s Professor of the Year, and the Honorary Consul General of Romania in Arizona.

The Romanian studies program annually hosts guest lecturers and performances, including traditional puppet shows. One hundred fifty students are enrolled in Romanian language courses, sixty in undergraduate and graduate cultural courses (which are often cross-listed as English, Political Science, Religious Studies, Cultural Geography or History classes), and there’s a summer study abroad program (led by none other than Orlich) to Romania and other Central European countries. The trip highlights Budapest, Hungary; Vienna, Austria; Prague, Czech Republic; Bratislava, Slovakia; the medieval castles and towns of Transylvania, Romania; the monasteries of Moldova; and the Black Sea. The summer program offers a broad range of classes at undergraduate and graduate levels, taught by Orlich and professors within the countries themselves.

For more information on the CECC launch performances and lectures, please visit http://english.clas.asu.edu/events.

Editor's Note: Arizona State will take on the University of California-Los Angeles, Nov. 5, in Pasadena, Calif.

Research collaborations are built by topic. Strong collaborations take years to build and are led by the team’s excitement of the science and the newness of the work. This is especially true of a collaboration between chemists at Arizona State University and the University of California, Los Angeles.

Michael O’Keeffe, an ASU emeritus professor and research professor of chemistry, and Omar Yaghi, a professor in the department of chemistry and biochemistry at UCLA, have been working together on new materials for years. They have spent countless hours exploring the materials world and coming up with new, never-seen-before concoctions.

One of their more recent, intriguing finds is fast becoming a hit in the rest of the world.

Yaghi and O’Keeffe discovered metal-organic frameworks (MOFs), which have enormous potential for a wide range of applications. Today, MOFs are widely studied in laboratories the world over, where thousands of researchers are synthesizing the materials and studying their properties.

The work on MOFs has catapulted the two collaborators to numbers two (Yaghi) and three (O’Keeffe) on the list of the top 100 cited chemists in the past decade, as ranked by Thomson Reuters.  In fact, the two are co-authors of the most highly cited paper in chemistry worldwide, which was published August 2010.

“The reason for the extraordinary interest in my work is to be found in the collaboration with Omar Yaghi of UCLA,” said O’Keeffe. “In the late ‘90’s Omar, who was at ASU at the time, discovered metal organic frameworks. These had unprecedented porosities and surface areas and have enormous potential for many applications, the most immediate being the storage of gases such as hydrogen, methane and carbon dioxide with obvious applications to clean energy technologies.”

Thomson Reuters top 100 celebrates the achievements of chemists who have the highest citation impact scores for chemistry papers (articles and reviews) published since January 2000. Thomson Reuters published the table in this, the International Year of Chemistry.