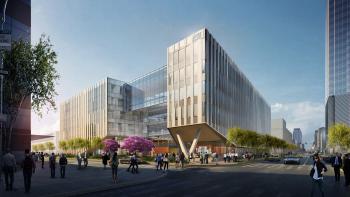 “The Arizona Center for Law and Society is another wonderful addition to our growing campus in the heart of Phoenix,” Crow said. “Having the Sandra Day O’Connor College of Law in downtown Phoenix fits perfectly with ASU’s mission of building strong learning and career connections with media, health care, corporate and government organizations for the more than 11,500 students at the downtown campus.”

Construction on the Arizona Center for Law and Society began in July. The new building will be ready for classes by August 2016. The College of Law currently occupies its home of almost 50 years, Armstrong Hall, on the Tempe campus. ASU and the College of Law are committed to ensuring that the Armstrong name will be honored in the new law school.

The Arizona Center for Law and Society is being funded by the City of Phoenix, which is providing land and $12 million, construction bonds through ASU and private donations. The College of Law has set a capital campaign goal of $50 million for construction of the building, and has raised more than $34 million so far.

“This could not have been possible without the generosity of our alumni and connected legal communities,” Sylvester said. “We are particularly honored that long-time Phoenix attorney Leo Beus and his wife, Annette, recently made a $10 million contribution to the building’s capital campaign. ”

The building is planned to be approximately 280,000 gross square feet with two levels of underground parking. It will have 18 rooms in which classes will be regularly scheduled, including one large lecture hall dedicated to university undergraduate education. Features of the new law school include a high-tech courtroom and an active learning classroom.

“Not only will the new law school have state-of-the-art learning facilities, it will also provide our students with incredible opportunities,” Sylvester said. “The downtown location is near the courts and the city’s legal district, which will prove invaluable to our students in the form of internships, externships and networking.”

The Ross-Blakley Law Library, currently located in a separate building near the law school in Tempe, will be moved to the new building. The library will occupy multiple floors and create the main circulatory structure of the center. The first floor of the building will have retail space consisting of a school bookstore and a café.

The Arizona Center for Law and Society will also include space for two think tanks, multiple centers with cross-disciplinary focus and the new ASU Alumni Law Group, the first teaching law firm associated with a law school.

The lead architects on the project are Ennead Architects and Jones Studios, with DPR Construction as the lead builder.

David Tinapple, an assistant professor in the School of Arts, Media + Engineering in the Herberger Institute for Design and the Arts, was awarded a $1,952,419 National Science Foundation (NSF) grant to explore, analyze and improve existing student web-based peer review systems. The project is titled "Collaborative Research: Research in Student Peer Review: A Cooperative Web-Services Approach."Tina...

David Tinapple, an assistant professor in the School of Arts, Media + Engineering in the Herberger Institute for Design and the Arts, was awarded a $1,952,419 National Science Foundation (NSF) grant to explore, analyze and improve existing student web-based peer review systems. The project is titled "Collaborative Research: Research in Student Peer Review: A Cooperative Web-Services Approach."

Tinapple applied for the grant under the NSF program “Improving Undergraduate STEM Education,” or IUSE. STEM stands for Science, Technology, Engineering and Mathematics. 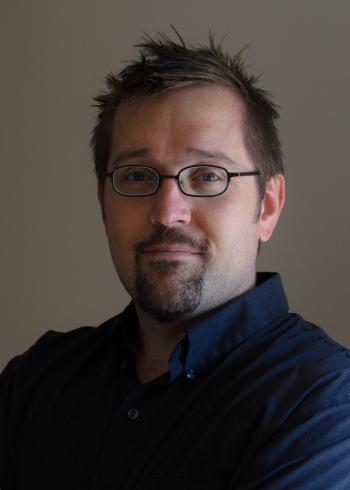 In conjunction with the Division of Undergraduate Education (DUE), this program is geared toward advancing the improvement of undergraduate STEM education by supporting the development of innovative learning technologies “through funding research on design, development, and wide-spread implementation of effective STEM learning and teaching knowledge and practice, as well as foundational research on student learning,” according to the website.

“Our project will identify… core design concerns common to all peer review systems and build web services available for use in any peer-review system,” Tinapple explains. “These web services will include algorithms for intelligently assigning student reviewers to specific peers, determining reviewer reputation, assessing review quality and measuring the credibility of student reviews.”

Tinapple had already laid down the groundwork for the project with his work on an internal peer-review system with fellow AME faculty member Loren Olson, who leads the school’s instructional technology team.

Offering some additional insight into the project’s background, AME Director Sha Xin Wei says, “David Tinapple and Loren Olson’s work on CritViz started as a clever response to the serious problem of how to retain some of the quality of feedback available in a studio-based course when the student to faculty ratios are up to 10 times greater than a typical studio. The web-based peer critique system is a set of techniques for peer critique that shows promise to elevate the level of student-centered learning. This sort of work has tremendous potential for scaling aspects of quality studio critique to large numbers of students in creative practice courses in ‘nearline’ learning, and to greatly amplify their learning experience in the classroom itself as well.”

Under Tinapple’s direction, the three-year project will bring together five researchers in academic peer review, including several who have developed peer-review systems, and an advisory board that includes developers of the largest online peer-review systems in North America. The team’s larger goal is to advance the state of the art in peer assessment, which is increasingly important not only in traditional classroom settings, but also in online courses and MOOCs.

ABOUT THE SCHOOL OF ARTS, MEDIA + ENGINEERING

The School of Arts, Media + Engineering (AME) is a collaborative initiative between the Herberger Institute for Design and the Arts and the Ira A. Fulton Schools of Engineering, focused on research and education in experiential media and digital culture. AME offers a BA in Digital Culture, an MA in Digital Culture, a PhD in Media Arts and Sciences, and concentrations in graduate degrees spanning the arts, sciences and engineering. AME faculty and students study, develop and apply new media systems that enhance education, health, culture and everyday living. For more information about AME, visit ame.asu.edu.