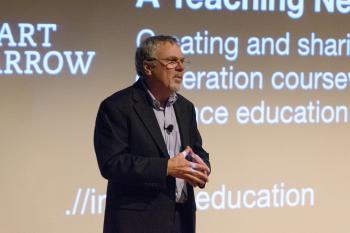 “Having more students successfully complete college science courses is a huge benefit to our society and will strengthen our nation’s competitiveness,” said ASU President Michael M. Crow. “Efforts like these, which utilize technology to engage students in a more meaningful way and encourage them to learn science through the exploration of the worlds around them will be vital in removing traditional barriers to a college degree.”

“The Inspark Science Network will empower teachers to create learning experiences that combine the power of adaptive learning with the magic of great classroom instruction,” said Dror Ben-Naim, CEO and founder of Smart Sparrow. “We are proud to establish a world-leading team of experts, and contribute toward creating tools that will have a lasting and significant impact on student success.”

The Inspark Science Network is an initiative of Smart Sparrow, in partnership with ASU’s newly established Center for Education Through Exploration. The center, directed by Ariel Anbar, a President’s Professor in the School of Earth and Space Exploration and the Department of Chemistry and Biochemistry at ASU, is an initiative designed to promote active learning, teaching science as the means by which we explore the unknown, rather than simply learning what is already known. Founding Inspark partners also include Achieving the Dream, The University of Texas at Arlington and e*mersion, a science animation company.

With help from Achieving the Dream, a national organization focused on improving outcomes for low-income and traditionally underserved students, Inspark will produce innovative courseware and work to ensure that faculty and community colleges around the country can access the network. George Siemens, executive director of The University of Texas at Arlington’s Learning Innovation and Networked Knowledge Lab, will lead a research effort to test the efficacy of the new courses and networks.

Anbar will guide the Inspark Science Network in developing “smart courses” that teach basic science concepts through the exploration of intriguing questions, placing traditional science content in a compelling context.

“We believe science is fundamental to teaching students how to be critical thinkers and successful contributors to the future of our society,” Anbar said. “This network will pull together like-minded professionals who are passionate about teaching and committed to ensuring that all students succeed.”

On stage before a packed house at the Orpheum Theatre, actor Alan Alda and ASU physicist Lawrence Krauss held a revelatory, passionate and often witty conversation as part of the inaugural Origins Project Dialogue, Jan. 15.

The theme of the dialogue, “Science and Art: Long Lost Lovers,” tackled the communication links between science and the humanities, curiosity and the joy of discovery, and the importance of science education and literacy in politics, democracy and the future of our society. 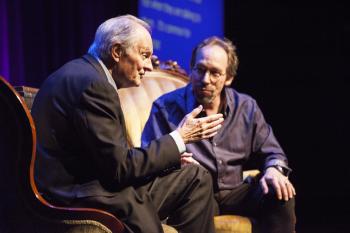 “Alan Alda is probably the one person in the world that everyone likes,” said Krauss as he introduced Alda and his long list of achievements to the captivated crowd of 1,300 in attendance.

While Alda is best known for his landmark role as Hawkeye Pierce on "M.A.S.H.," he’s also held a lifelong interest in science, hosting “Scientific American Frontiers,” and channeled his scientific passions into numerous acting roles, plays, documentaries and now, at 78, a professor at the State University of New York's Center for Communicating Science.

“One of the things I think I can contribute is all the things I’ve learned in my life about communicating, about trying to be truthful and simple as a performer and as a writer. I think I can convey that to scientists and show them the connection to their own work,” said Alda.

At the center, Alda challenges scientists to improve their communication skills and audience empathy through improvisation exercises, and in the annual Flame Challenge, where scientists are challenged to explain a basic scientific topic, such as "What is sleep?" in language an 11-year-old can grasp.

“Alan has become in many ways a spokesman for science,” said Krauss.

A half-century ago, British scientist and novelist C.P. Snow, in “The Two Cultures and the Scientific Revolution,” wrote about the historic split between art and science being a major impediment to solving profound societal challenges.

“I was sort of a victim of that divergence,” said Alda. “When I was in high school, I was still very curious about science, but I knew I wanted to be a writer and an actor. And they just didn’t go together in those days. We weren’t taught in a way that brought them together, which is more common now.”

“I actually wanted to be an actor,” said Krauss. “I got involved in that, but it was kind of a snob thing. It just didn’t seem intellectual enough.”

During Krauss and Alda’s wide and free-ranging discussion, this central theme was touched upon in their mutual admiration of scientific heroes such as Nobel Prize-winning scientists, including physicist Richard Feynman, a role played by Alda on Broadway in “Q.E.D.,” and more recently, chemist Marie Curie in “Radiance,” a play written by Alda.

“Her curiosity led her to look at what other things can give out rays,” said Alda. “If you give up curiosity-driven research, you are going to give up a major part of our understanding of the universe.”

“Feynman said that science is imagination in a straightjacket,” said Krauss, explaining that whatever wonderful ideas a scientist may come up with to attempt to solve a problem, ultimately it’s constrained by experimentation. “Science, as beautiful and elegant as it is, if it doesn’t hold water when it comes to reality, you throw it out.”

Krauss and Alda emphasized that perhaps scientists’ failure to adequately communicate and connect the dots between basic science and technology, such as the development of the transistor leading to today’s smartphones, may be why the public, or the politicians who make decisions on funding science, often don’t see the point of basic research.

“Fifty percent of the gross national product of the United States right now is based on curiosity-driven research from more than 30 years earlier,” said Krauss. Alda pointed out that there is a direct line you can trace over a century of discoveries, from Einstein’s theory of relativity to the technology that makes GPS possible. “The very members of Congress who say, ‘Why should we fund this? What is it good for?’ are themselves carrying around GPS in their pockets.”

By the end of the evening, their dialogue, followed by an audience Q&A session, revealed that science and the arts should not be viewed as strange bedfellows, but rather, all interwoven into the same exciting fabric of the human experience.

“And that excitement can be contagious,” said Alda. “We need to catch that virus of the beauty, the adventure of science, because it’s one of the great pleasures of life, one of the great things that humanity has produced.”

“The real beauty of science is, like art and literature, the ideas, and what makes us human, the pleasure of being human,” said Krauss.